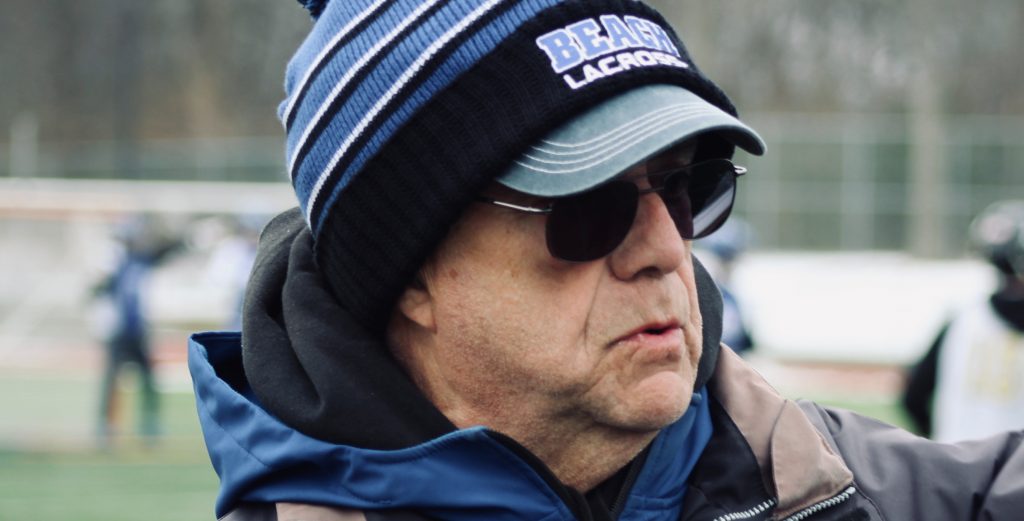 Native of Massapequa NY, Kasper grew up in the baby boomer era. A “Babe Ruth All- Star,” he grew up hitting homers and catching pop flys on the baseball diamond. However when it came time to try out for the JV squad, he didn’t make cut. Walking off the field with his head down, Kasper was approached by the Varsity Lacrosse Coach of Massapequa High School. Native blood running through his veins, the Coach handed Kasper a hickory crosse and told him to “put the glove down, put these gloves on, get on the wall… we’re playing.” Kasper immediately fell in love and his lacrosse career was born.

Because he was also a football guy, he already had the edge that a lacrosse player needed to play in that day. Many of his friends were all ready on the lacrosse team, it was a no brainer for him to join. Jim took an extreme liking to defense because of his roots on the gridiron. “I used to dive in front of shots and see how many welts I could get on my chest.” A true competitor, he was part of the first ever recruited class to Hofstra University, where he played for Howdie Meyers for three years. During that time he made the switch from defense to offensive midfield because of his athleticism and his love to get up and down and score goals.

After his career at Hofstra, Kasper read in the paper that Nassau Community College was starting a lacrosse team. Kasper walked across the turnpike went right up to the lacrosse office at NCC where he met Mike Candel. “I’ve always wanted to Coach,” Kasper said. “I don’t have any money for an assistant,” Coach Candel stated. “I don’t care about the money,” Kasper expressed. He was hired by Mike Candel on the spot and his coaching career was born. From 1967 to 1982, Kasper helped coach the Lions for 15 years. Not only did Kasper coach lacrosse, but he was also on staff as a coach for the football team at Nassau for 32 years. During his time as a lacrosse coach for Nassau, they only lost 9 games. “We has such good players… we could beat anybody…” After his stint with Nassau Lacrosse, Kasper took over the program at MacArthur High School in Levittown, where he coached for six years, built some very good teams, and had the opportunity to coach current Head Coach for the Hofstra Pride, Seth Tierney.

A few of the most notable towns Kasper had the opportunity to coach in are Baldwin, Northport and Long Beach. During his time in Baldwin, Kasper coached for twelve years and built some really good teams. He even said it himself that “his heart has always lied with the Baldwin community, I loved coaching there.” He even stated that the best athlete he ever coached was from Baldwin, Timmy Burns, who went on to be a great player for Syracuse University. In 2002 Kasper decided to part ways with Baldwin, and two weeks later, he got offered the assistant job over at Ward Melville where he had the opportunity to coach his son, before making the jump to Northport High School. For three years Kasper was on staff for Northport and he claims that Drew Thompson, a midfielder that continued on to have an outstanding career at the University of Virginia, was the best lacrosse player he had ever coached. In 2005, Kasper went down ocean parkway to Long Beach, where he had the opportunity to mold and shape the program, rolling out some studs including Joe Radin- Marist College 2016 and J.T Forkin- Syracuse University/ NYIT 2019.

A pioneer to the game, Jim Kasper has had a hand in shaping what now is “Club Lacrosse,” by being a founder in Four Star Lacrosse Camps. These were week long training camps where teams could enroll to work on skill, learn new aspects of the game, train and play lacrosse while getting recruited. This model is what molded tournament lacrosse giving rise to the great club lacrosse programs and tournaments we know of today.

With all the rule changes in the college game, if you ask Kasper what the future is? He will tell you that “the future of lacrosse is in the poles.” One of Kasper’s greatest attributes in being a coach is having the ability to spot players and convert them to the ways of the LSM. He mentions names such as Dave Devine, a Nassau grad who took up the pole to secure a spot on the field. Bobby Gormsen, who played pole for ten minutes before getting recruited to UNC to be a pole, and even faced off with the pole. Another notable story was Kasey Carroll, former Army Ranger that played for Duke in the mid 2000’s, left for the Army where he completed 4 tours in Afghanistan, and went back to Duke four years later, secured a roster spot and won a National Championship in 2013; a true storybook ending. Kasper has been apart of and coached enough programs to see talent and expose it. He is man that is extremely knowledgeable of the game and is excited for what the future holds for him at Locust Valley. Hats off for Jim Kasper and what he has accomplished for the great game we all love.