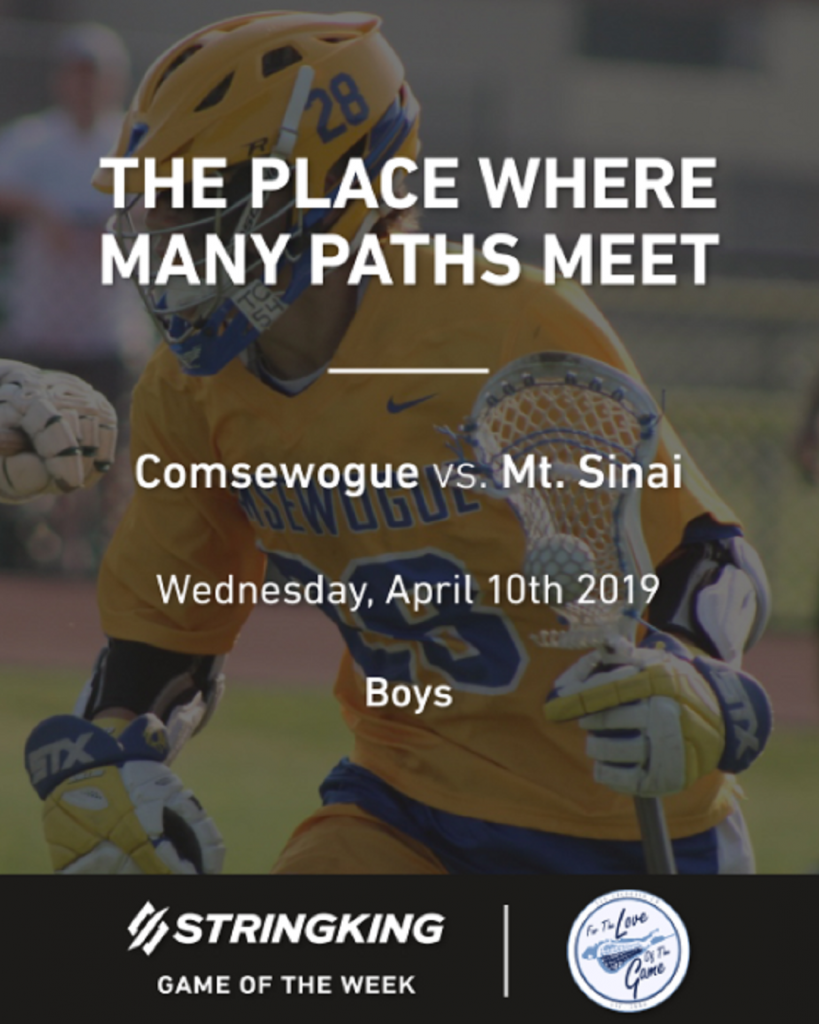 Comsewogue, which translates to “The Place Where Many Paths Meeting,” will house a battle between two power house programs in Suffolk County. The Mustangs will ride like the wind to Comsewogue High School on April 10th at 7:00pm to take on the Warriors. An LILJ String King Game of the Week, preseason Rank #6, Comsewogue will look to defend their turf and upset #3 Mt. Sinai.

Pete Mitchell has been at the helm for the Warriors for over 2 decades. He has had much success in his tenure and is looking to have another successful season in 2019 4 and 1 on the season, Comsewogue has won 4 straight, with a quality win against a very good ESM squad by a score of 8 to 7.  The backbone of Comsewogue team is their Senior Goaltender, Tommy Heller. Heller, comitted to UAlbany will look to have a day against the ‘Stangs. Saving the ball at 68%, his eyes are wide open and he will definitely prove the be the link that keeps ‘Wogue in the game. At the midfield, Sean Kennedy (LIU Post) and Chris Wolfe (Pace), will look to control the pace and lead the charge for the Warriors on the offensive end.

Mt. Sinai is playing this year with a chip on their shoulder, as they came up short in the Class C Suffolk County Championship a season ago. With a record of 7 and 0 on the 2019 season, The Mustangs are in full tilt at 600 horsepower. But can they continue the stampede against Comsewogue? Offensively, everything seems to be running through the freshman Joey Spallina. With 24 points on the year, he will have to get hot early in order for the ‘Stangs to come out on top. The mustangs are also very strong at the midfield, with an all sophomore line including Brandon Ventrolla, Tyler Gatz and Dom Boscarino.

A battle is going down next week at Comsewogue High School. Predicted to be a high scoring game, whoever’s offense has the hot hand, will prove to be the victor. However ‘Wogue does seem to have the advantage between the pipes, which could prove to be the piece that allows the Warriors to pose the upset. Can Mt. Sinai ride into the sunset with a win on the road and keep their undefeated win streak alive? Or, will the Warriors battle royale be too strong for the ‘Stangs to handle? Find out as LILJ will bring you coverage for all 4 quarters, with post game interviews to follow.