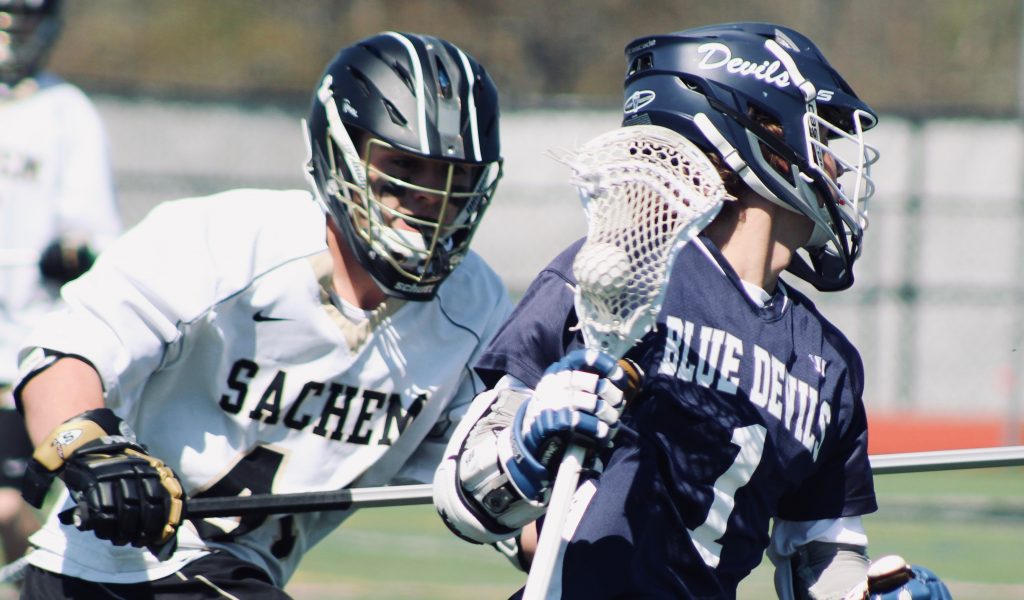 In the first half of this game, it was a very tough battle between two teams in Suffolk County trying to make a playoff push. It was 5-5 at half, and in the second half it was anyone’s game for the taking. Sachem North would take control though, scoring 3 goals in the third to make 9-6, and then they outscored Huntington 3-1 in the fourth quarter for a 12-7 victory.

I was extremely impressed with Sachem North on both sides of the ball. They have great chemistry on offense and defense. Starting with the defense, Anthony Mancino took charge out there, and I thought he played a great game. Mancino, who finished with 9 saves in this game, had an impressive save in the first half, stuffing his opponent. The defenders protecting Mancino also impressed me as well. Joe Karnich had an impressive caused turnover, where he had a yard sale and he scooped up the ground ball and made things happen on offense. This defense is aggressive. Other key cogs include Seniors Matt Griffin & Ryan Kinsley, and Junior Nick Davide. They are a very sound unit and they are very good in the clearing game. On offense, the Quadrino brothers, Frankie and Christian have great chemistry together, and they make things happen on the offense. Both Frankie and Christian Quadrino are prolific goal scorers as Frankie netted 5 goals in this game, and Christian had 3 goals along with 1 assist. They both feed off of each other and they are good at finding each other for open looks. The fire power doesn’t stop there for the Flaming Arrows. Matthew Keegan and Cole Stassi add to the chemistry that this offense has. Keegan had a strong game as he had 2 goals along with 2 assists and one of his goals was a very impressive face dodge on the right side for a goal. Cole Stassi had 1 goal and 3 assists, and he had a very impressive feed after Sachem North cracked a ten man ride. Sachem North is having a bounce back season in 2019, and with the chemistry this team has, they can make noise in the playoffs.

Huntington is a very young team. Freshman Robbie Smith is a stud and has been one of their best players for the Blue Devils this season. Smith is a fun player to watch, and he will be cornerstone for the Blue Devils for the next couple of years. Robbie Smith had 3 goals along with 4 ground balls in this game. Jack Krisch can really shoot the ball as he had 2 goals on the day. Only a sophomore, Krisch can become a dominant force on the field for the Devils over the next two years. Huntington has played some very tough opponents this season, and their schedule lightens up a little bit as the Blue Devils try to make a playoff push.

On April 23rd, the Islip ladies hosted the Mattituck girls. In the first half, the 2018 State champions started strong out of the gate with an 11-2 lead at the half. Instead of laying down and giving up, the Lady Buccaneers kept their heads up and refused to give up as they went on an 8-2 run in the second half. Despite a great second half by the Buccaneers, they still were defeated by the Lady Tuckers by a score of 14-10.

The Mattituck ladies came into this game motivated, following a tough loss against Westhampton, 10-9. Before this game, the Lady Tucker were on a roll as they won three straight games, and in this game they wanted to get back on that roll. The Lady Tuckers have a tough road ahead of them, as they have some tough games coming up against Mount Sinai, Riverhead, and Eastport-South Manor. Even though, the Lady Tuckers came out firing in the first half, they can’t take their foot off the gas and they gotta continue to play hard. The Mattituck ladies will be just fine though as this team has a lot of talent, they are very well coached, they have fire power on the offensive side of the ball, and they move the ball very well.  One player that really impressed me was Mackenzie Hoeg, who put on a clinic in this game as she scored 4 goals and had 2 assists. Riley Hoeg also impressed me as well. Riley Hoeg had a very unselfish game as she had 4 assists along with 1 goal.

What impressed me the most about the Lady Buccaneers was their heart and determination. The Islip Ladies could have given up and said to themselves that today’s not our day, but they did the total opposite. You can’t teach that heart and determination, but the Lady Buccaneers also have talent on this team. Kristen Scheidel really impressed me, as she was all over the field and scored 4 goals. Reagan Mullins also impressed me as well as she scored 2 goals, and had a highlight reel diving goal in this game. Kelsey Scheidel (1 goal, 2 assists), and Riley Coleman (2 goals, 2 assists) also had impressive days. So far in 2019, the Islip Ladies have had a very tough schedule as they have played some of the top teams in Suffolk County. They still have a some very tough opponents ahead to round out the season, but with a mixture of heart and talent, the Buccaneers have the ability to sneak up on some teams. The Buccaneers should not be taken lightly.