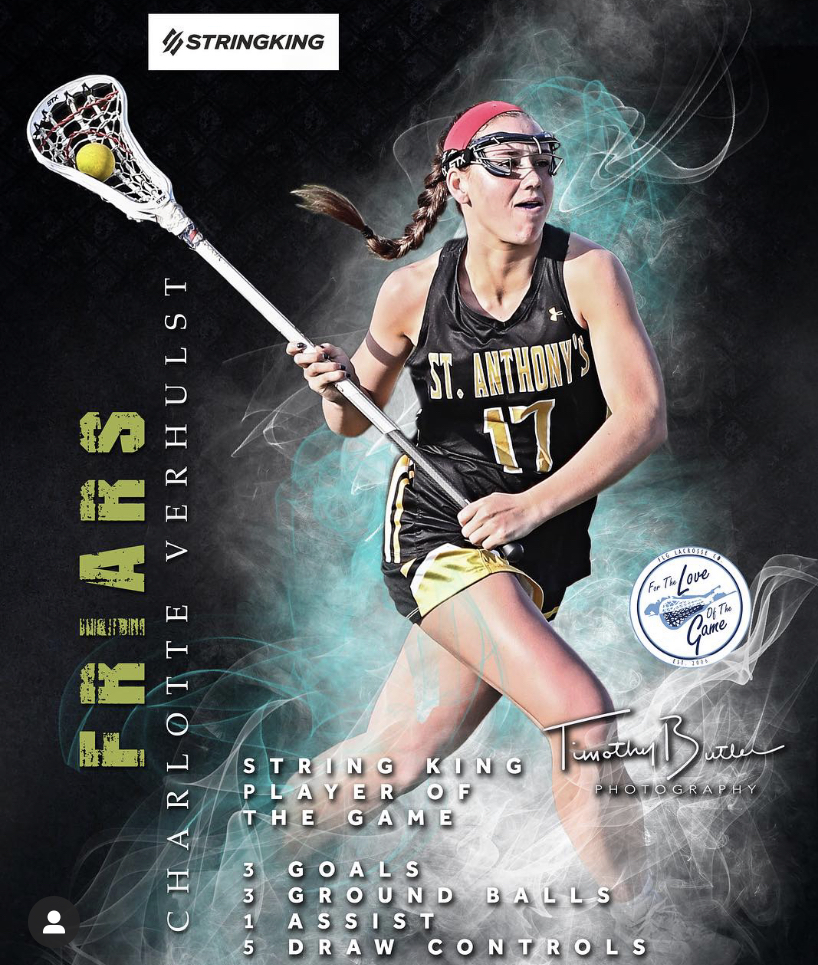 The atmosphere for the St. Anthony’s vs. Sacred Heart rivalry game at four sisters field was electric. The stands were absolutely packed for this clash between the top 2 parochial girls programs on Long Island. This game did not disappoint.

Sacred Heart drew first blood in this game, as in the first half, Sacred Heart possessed the ball for the majority of the half, and the difference maker for them was Senior goalie, Daniela Stelcer. Stelcer was outstanding in the, making save after save, especially a stellar kick save. St. Anthony’s did not possess the ball much for the first half, but when they did they capitalized.

Going into the second half with Sacred Heart up 6-4, Katie DeSimone sparked the Friars and came out full steam ahead. DeSimone started  the party in the second half for the Friars with a goal and and then found Natalie Smith off the cut for another goal. The story of the second half was the domination on the draw by the stringking player of the game, Charlotte Verhulst. Verhulst won 5 draws, had 3 goals, 1 assist, 3 ground balls, and caused 3 turnovers in the game. The other stringking player of the game was Natalie Smith, who rightfully earned it. Smith was trenedmous in this game as she scored 3 goals, and scooped up 2 ground balls. The first half was won by Sacred Heart, but in the second half the Friars took charge to win the game 10-9.

The St. Anthony Friars did not start this game very strong as they were dominated on the time of possession in the first half. At half time, St. Anthony’s made adjustments, and Katie DeSimone was a catalyst for the lady Friars and set the tone in the second half. One of the big key’s for St. Anthony’s in the second half was the performance of Charlotte Verhulst. Verhulst was spectacular in this game as she was all over the field. Even though Verhulst lit up the stat sheet with 3 goals and 1 assists, she did the little things right such as causing turnovers, scooping up ground balls, and winning draws. Natalie Smith had great chemistry with Verhulst, and they were both pivotal to the Friars big victory against Sacred Heart. On defense, Kira Accettella stepped up causing 3 turnovers. Looking ahead for the Friars, they have a pretty light schedule with the exception of Manhasset. The bottom line here is that Sacred Heart and St. Anthony’s will most likely meet up again in the Parochial AA championship, and after facing each other two times now this season, St. Anthony’s can not get overconfident over the fact they beat Sacred Heart twice.

Sacred Heart should not press the panic button. This team is still very talented, and they have a couple of competitive non-league games coming up against two of the top women’s programs in Long Island in, Garden City and Cold Spring Harbor. Those games will be a great test for them as they can really take advantage and get better to prepare for St. Anthony’s. If Daniela Stelcer played the way she played today, opposing teams are going to have a tough time when they play Sacred Heart. Melissa Biscardi impressed me in this game as she was effective on the draws and she had 2 goals. Arden Tierney also impressed as well by scoring 2 goals along with Kayla Martello, who also had 2 goals. Sacred Heart plays sound and discipline lacrosse, and if they continue to play that style of lacrosse, they will be just fine.