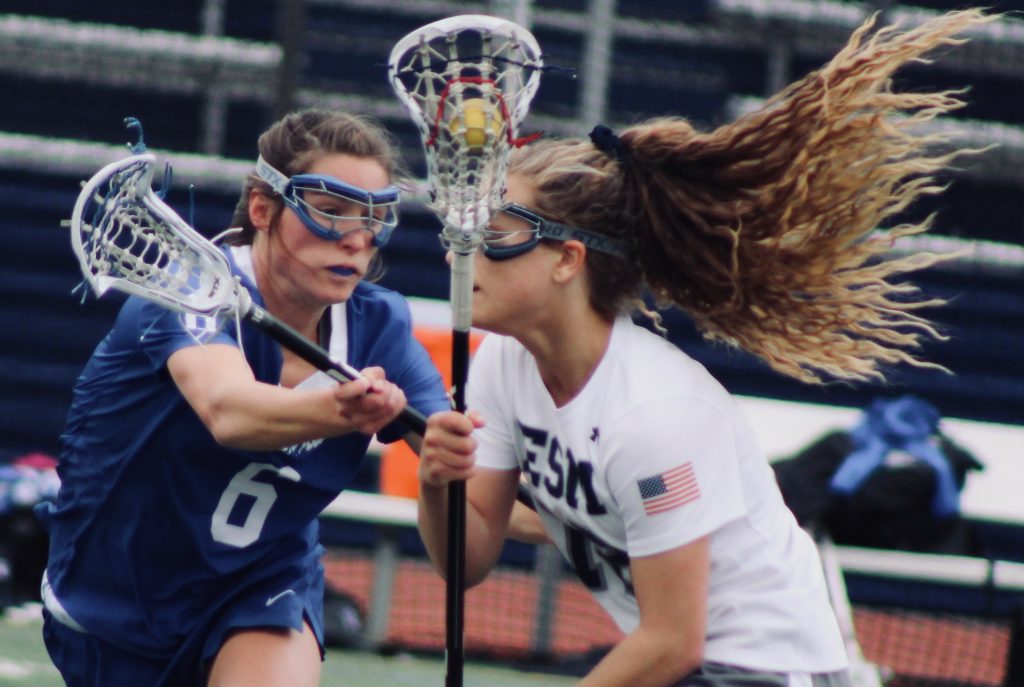 On April 27th, the Gains for Brains Tournament took place at Cold Spring Harbor High School. The tournament was created by Andrew and Lauren Rappaport, and it’s goal is to raise money for the Making Headway Foundation. The Making Headway Foundation gives care and treatment to children with brain and spinal cord tumors. This year was the fifth year for the Gains for Brains Tournament, and it was a huge success. You got the best of both worlds by watching some of the tops women’s lacrosse programs outside Long Island battle it out against Long Island’s best. More importantly, you have some the sport of lacrosse bringing together great people to fight for an incredible cause.

There was a lot of great action on Saturday, but the game of the day was Darien vs. ESM. ESM came off a tough loss to Mount Sinai this past week. This non-league game was not going to be a cakewalk by any stretch of the imagination for the Lady Sharks, as Darien is one of the top women’s programs in the country. ESM wanted to show why they should be in the conversation when it comes to talking about who’s the top women’s program in the country.

ESM came out like they were shot out of a cannon in the first half, and you can see that they were on a mission and they were motivated as they wanted to bounce back from a tough defeat against Mount Sinai. They took out their frustration as they outsourced Darien 7-2 in the first half. Ellie Masera absolutely went off in the first half, scoring 5 Goals, and she looked like no one could stop her.

Going into the second half, fans watching this game thought it was going to be over within the first couple of minutes in the second half, but that was not the case. Darien made adjustments at half time and scored 7 unanswered goals to give them an 8-7 lead. The Lady Sharks were determined by the Blue Waves run, and responded beautifully. In the first half, Darien faced guarded Kasey Choma and kept her relatively quiet for most of the game. In the second half, the Lady Waves could not hold down Choma for much longer. With 8:30 left on the clock, Marisa Tancredi found Choma breaking free from her defender for a goal to make it 8-8. With 5:51 left, Darien did answer back to take a 9-8 lead. When the game is in crunch time, all great athletes rise to the occasion, and Kasey Choma did exactly that. Choma tied the game once again with a couple of minutes left. Now tied at 9, and only couple of seconds left, the Blue Waves figured that the ball was going to be in either Choma or Masera’s stick, but Sammy Filippi stepped up in a big way. After a great timeout by ESM, Filippi took the ball from behind the cage, drove to the right side, executed an inside rolled on her defender, and launched an acrobatic shot to the far pipe for the game winning goal!

ESM Takeaways
ESM had such an amazing showing at the Gains for Brains event. Darien is one of the top teams in the country as they defeated another top team in Long Island, Garden City, 19-4. Beating Darien is a huge win, as it will give them momentum heading into the playoffs and give the Sharks a sense that they can run with anyone. Offensively, ESM has shown they can do damage when Choma is locked off, and if they continue to play like they did against Darien, they have a good chance coming out of Suffolk. Katie Vahle played one of her best games in net, sparking the defense by making some ridiculous saves. Cat Flahrety held down the fort near and around the crease as she always does. Her ability to defend around the goal and never get beat makes this team so tough to attack. Choma and Masera are two midfielders on another level. If those two are playing their best game, this team will be very difficult to beat. Arnston has tremendous vision from the attack, and is a great distributer for the Sharks offense. Having a dynamic attacker like Filippi gives this team that edge they need to beat Long Island’s top teams.