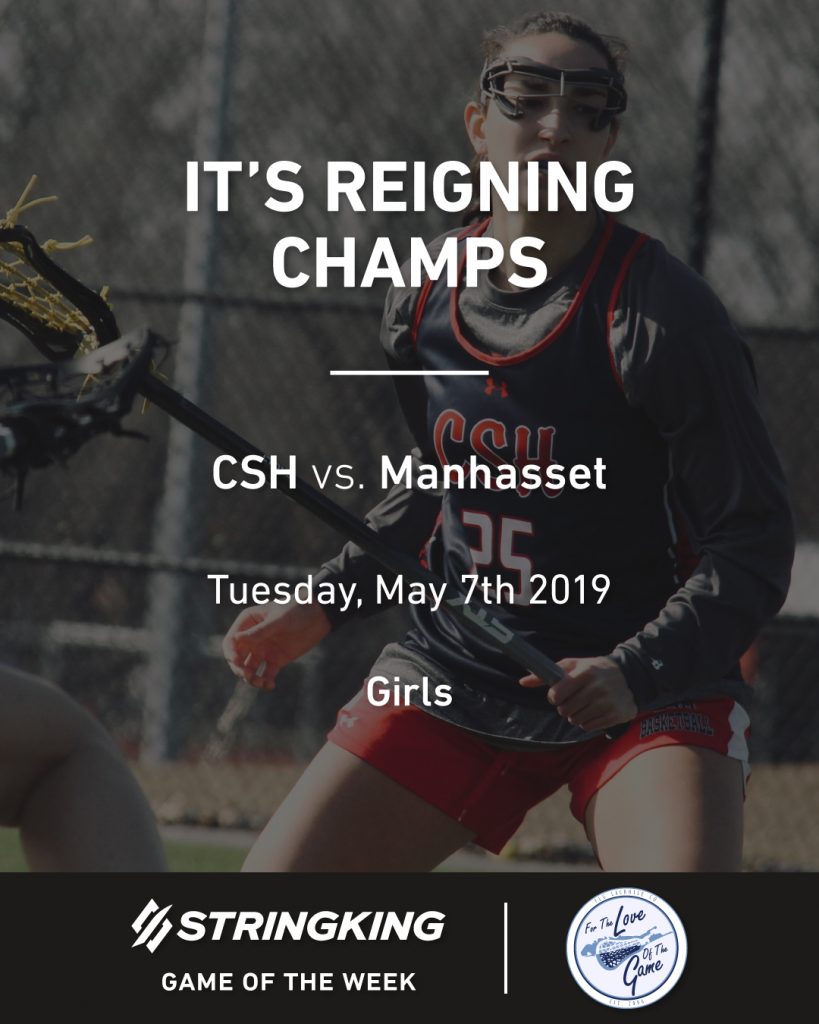 Cloudy with a high of 70 degrees and a chance of Reigning Champs, on Tuesday May 7th, 4:45pm, 2018 Class B State Champion Manhasset will travel to the Harbor to take on Class C State Champion Cold Spring Harbor. With much success in the 2019 season, both teams have only had 1 loss, and are going into this game on a multiple game win streak. With confidence running high, this game is going to be INTENSE. Tune in to @flglax via instagram as the LILJ brings you full game coverage!

For CSH, it all starts with attack duo, Caroline Debellis and Isabelle ‘Izzy’ Vitale. The Duke bound senior, Caroline Debellis has had an outstanding campaign, amassing 53 goals and 14 assists. Debellis is lethal around the goal-line, working for herself as well as off-ball. When teams are giving her pressure, Isabelle Vitale is able to pick up the slack, having just as many assists as goals, 43 and 40.

With strength in the net with Alyssa Moran, saving the ball over 50% and some workers at the midfield, including, Nicole Mormile (Middlebury), Grace Tauckus (Boston College) and the Hudson sisters, Grace and Maria, CSH has skill on both the offensive and defensive end, possessing the ability to get a stop and run in transition, which could prove to be a factor in this game. Cold Sprig has one the best defenders in the county in Sophia Taglich (Boston College)

Running the table in Long Island, LILJ has Manhasset Girls Varsity lacrosse has them ranked the top team on the Island, and they have absolutely earned it. The Indians have beaten every on LI team they have faced, suffering 1 loss to the McDonough School (MD) last month. Looking to secure another W and prove that they are still the number 1, CSH will definitely be one of the tougher teams they’ve faced all year.

Manhasset is led on the offensive end by two young gun sophomores, Grace Gately and Emma LoPinto. Combining to over 100 points, everything runs through these two ladies. They are controlling the pace, earning slides, scoring and assisting. Other notables on the offensive end at the midfield include, Maria Themelis, Ellie Taylor and Alexandra Petras.

Defensively, Manhasset is dominating and is STAKED with leaders at all positions. It all starts with Abigail Koyler. Saving the ball over 50%, she along her defenders are holding teams to very limited scoring, a goals against average of 5.42, which is absolutely OUTSTANDING. Manhasset has arguably one of the best defensive unit in the country, and  it includes Olivia Dooley (USC), Caroline Mondiello (Stanford) and Casey Rozsko (Drexel). The Indians lock it down and hold teams at bay, which could be the factor that sends them all they way through LI and back to states.

Who do you have coming out on top? This epic match-up is going to be a back and forth battle. FLG and the LILJ will be bringing you full game coverage via instagram @flglax so be sure to tune in on Tuesday!