Kellenberg Beats St. John the Baptist in Parochial A Championship 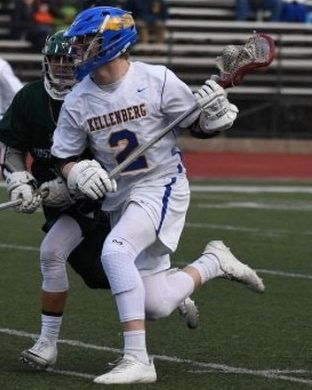 On 5/14, the Parochial AA Championship was on the line, and judging by the intensity and drive both these teams showed on the field, you can tell that both teams gave everything they had in the tank to call themselves champions. This game was tough, physical, and it was a straight up battle. There was a good amount of penalties in this game, but the refs let both of these team play. No doubt, this game had a championship like atmosphere.

Kellenberg set the tone in the first quarter as senior attackman, Sean Boil came flying around the X and found his boy, Matt Sluka for an absolute snipe, hitting the upper right corner.  Matt Sluka and Kellenberg would not take their foot off the gas, as Matt Sluka showed great vision when he executed a roll dodge and found Thomas Albig off a nice cut to make it 2-0.

St. John the Baptist never let this game get out of hand as senior Sean O’Donoghue would draw the slide behind the X and find Owen Shelly for St. John the Baptist’s first goal of the game. Owen Shelly did a great job all day getting himself open. Sophomore, Chris Annitto, found Shelly to tie the game at 2. SJB’s Chris Annitto wasn’t  done contributing, as he later got inside his defender from behind the X to give St, John the Baptist a 3-2 lead at the end of 1. In the second quarter, with the game tied at 3, Sean O’Donoghue would scoop up a ground ball off a rebound and score a goal to close out the first half. The score at halftime, SJB 4, Kellenberg 3.

In the second half, Kellenberg would start the party by scoring 2 unanswered goal to make it 5-4. Now in the fourth, after a key ground ball by Jimmy Cairney, a fast break ensued, and Liam Healy would capitalize off of Cairney’s GB to tie the game at 5 with 9:45 left in the fourth quarter. After the game was tied, Kellenberg would regain the lead with a laser by Joe Contino to make it 6-5, there was now 8:16 left in the game. After 3 unanswered goals by Kellenberg, two of them which were scored by Sean Foley, they would expand their lead to 9-5. After SJB and Kelly exchanged goals, the game would end 10-6, with Kellenberg earning the Parochial A Championship.

It’s been an up and down season for Kellenberg as they started out the season with 4 straight losses. However, Head Coach Shaun Moran would never let their season go in a negative direction. Kellenberg lost the first time around to St. John the Baptist, 12-11, and you could see that they learned from their mistakes from their first meeting, and bounced back to earn themselves the Championship. Looking ahead to next season, Kellenberg is losing a lot of key player such as Sean Boil, Matt Sluka, Dan Wilson, and Thomas Albig, who all had great seasons. They do have their leading goal scorer returning in Criffin Chernoff returning and the Sophomore will be the focal point of the offense for the next two years.

It was a heartbreaking loss for St, John the Baptist, but they should not be too disappointed because they had a great season, improving their win total by 5 games from 2018 to 2019, and bounced back from losing in the first round in the playoffs a year ago. The good news for the Cougars is they have a lot of key players coming back next season in, Jimmy Cairney, Chris Annitto, and Kyle O’Donoghue. Head coach, Bill Staak really did a great job turning the program around and making St. John the Baptist a legit Parochial A program. The Cougars took a step in the right direction, and there’s no reason why they shouldn’t improve in 2020, and continue to take a step closer towards securing a Championship.