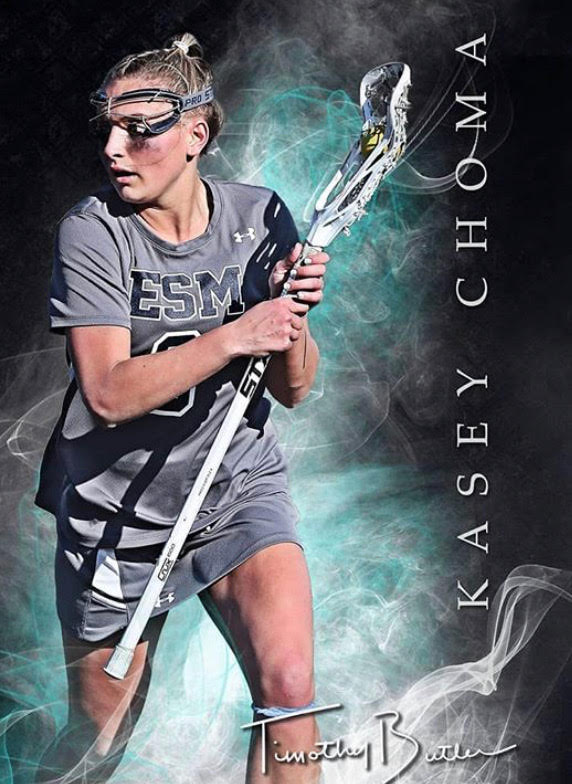 The 2019 Newsday Long Island Player of the Year, Kasey Choma, is currently in her first semester at Notre Dame. Kasey developed an early love for lacrosse, playing for the first time back in kindergarten. Her early devotion paid off as she was promoted to the high school team in 7th grade. The following year, while Kasey was still only in 8th grade, Eastport South Manor went on to win the state championship. The following season ended in heartbreak for young Kasey as she tore her ACL during the high school season finale. She was resilient, and came back stronger than ever,  leading her high school back to the State Title during her senior season. Her success goes beyond the state of New York, Kasey has displayed her prowess on an international level. As a member of the USA U19 team this past summer, Kasey and her team took home the gold. Hardwork pays off and nobody exemplifies that better than  Kasey Choma. 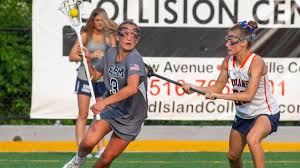 Choma playing for ESM during her senior season

I chose Notre Dame because it is an amazing academic and athletic University.  Notre Dame has such rich traditions and sports are a big part of the school’s social life. I have been watching the Notre Dame women’s lacrosse team play for a long time and I felt that it would be a great fit for me. I am looking forward to working hard and hoping to one day win a National Championship

Q: How has the first semester been at school?

I have been at Notre Dame for approximately three weeks and I have to say that I love every aspect of the school.  The girls and the coaches on the lacrosse team have been so welcoming and supportive and I am looking forward to the first home football game!

Q: What about Notre Dame most excites you?

The thing I am looking most forward to here at Notre Dame is the journey.  The possibility of winning a National Championship, meeting incredible people, making lifelong friends, building strong bonds and getting an amazing education.

Q: How did your ACL tear shape the player you became?

I never really understood the saying,” Everything Happens for a reason”, until I was 14 years old and I tore my ACL.  At first, I questioned why me but soon I realized that devastating injury would forever change me as a person and an athlete.   Not being able to play the game I loved so much made me recognize how much I wanted to be on that field and how much dedication and hard work I was willing to put in to become the best lacrosse player I could be.  I became stronger not only physically but mentally as well. I learned to never take anything for granted and how much hard work really does pay off.

Being part of the USA U-19 National team was unlike anything that I had ever experienced before.  Being able to represent the USA in lacrosse has been a lifelong dream of mine and for me to have been given the opportunity was so humbling and made me so proud.  I became so close with my teammates and made forever friends. It was such an honor to play along such great athletes and to learn from them. Also meeting lacrosse players from all over the world was an amazing experience. I became friends with girls from Kenya, Jamaica, Hong Kong and Wales- just to name a few! It was pretty cool to learn some of their traditions and  get to talk about the different styles of play.

Q:Describe the benefits that 5 and a half seasons of varsity lacrosse can give a player.

I was very fortunate to be called up to Varsity halfway through my 7th grade Junior Varsity season.  Yes, I was only 12 years old and was playing alongside and against 16,17 and 18 year old girls who were physically taller and stronger than me but that’s what shaped me into the player I am today. I was so lucky to be on a team (ESM) that accepted me and became my mentors and taught me so much. Those 5 and 1/2 years of experience on Varsity were priceless and have given me so many opportunities.

Q: What is your major and how do you see your lacrosse experience helping you as an adult?

I was accepted into the Mendoza College of Business at Notre Dame and I plan on majoring in business and finance.  I also have such a love of sports that I do see myself continuing in that field, possibly in the way of broadcasting. My lacrosse experiences have taught me how to work together as a team to achieve a common goal and it has taught me that hard work pays off.  I have also learned from being a captain how to communicate, be a leader and handle certain situations within the team with empathy and diplomacy. All of these tools will help me as I graduate from college and become an adult.