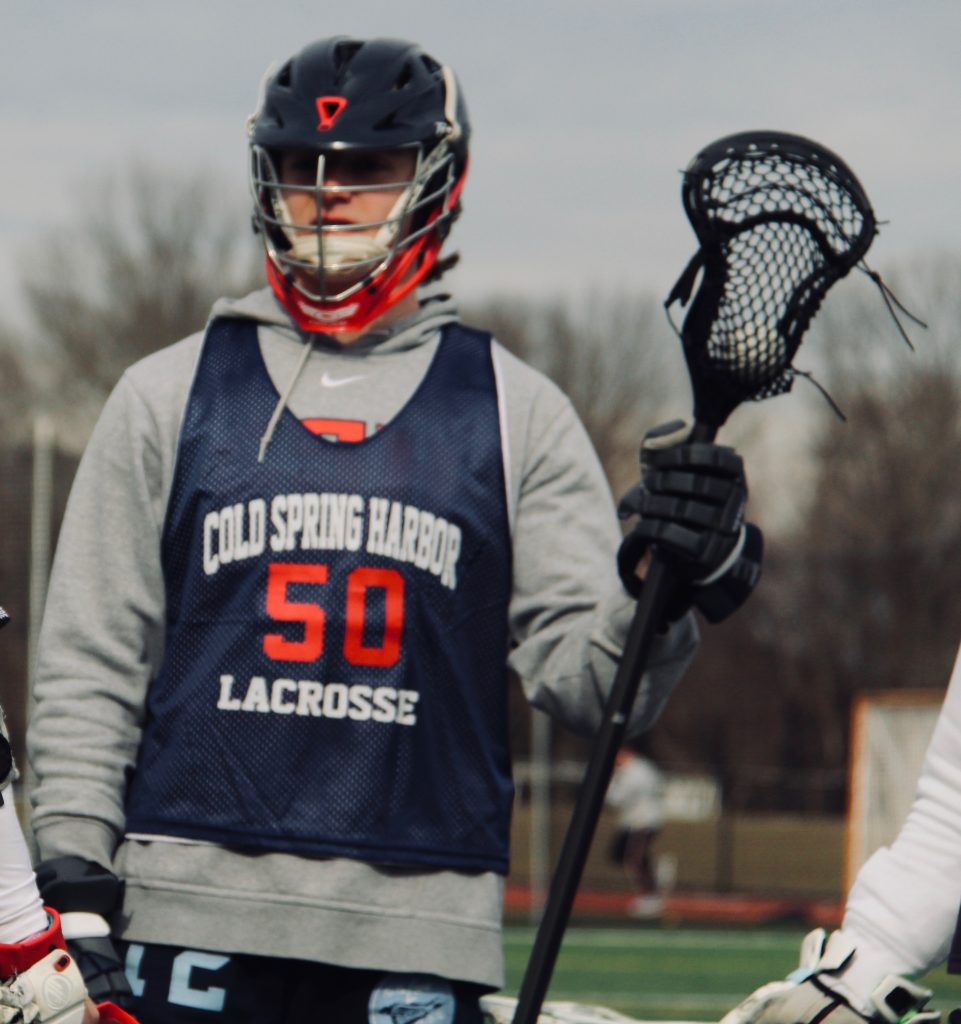 Jacob Bruno, is a three sport studlete at Cold Spring Harbor High School. During the fall he is tearing it up on the Football field. The starting running back has led the Seahawks  to 2-0 start this season, seemingly scoring at will, Bruno uses his strength to run over every defender in his path. This past weekend Jacob scored four touchdowns in a resounding victory for CSH. Bruno spends his winters wrestling, the Cold Spring Harbor wunderkind came in second in the division two tournament this past February and will surely be a force to be reckoned with this time around.

Where Bruno has truly made his mark however is on the lacrosse field. He has committed to playing his college lacrosse at Amherst. The defenseman is looking forward to the new challenges that college lax will offer, but there is unfinished business Bruno needs to take care of right here on Long Island first. The Senior will be playing his last season at Cold Spring Harbor with a chip on his shoulder. The Seahawks came so close to a title in 2019, but a one goal loss in the Long Island championship put Bruno’s dream on hold for another year. Bruno is on a mission to redeem himself and the whole team after the crushing defeat a season ago, and there truly is no reason to expect anything less.

Q: What have you enjoyed most about your time at Cold Spring Harbor High School?

I have absolutely loved my time at Cold Spring Harbor, both academically and athletically. In the classroom, I have the opportunity to learn and grow with the endless support of my teachers. On the sports field or the mat, the expectation is to win, and nothing less. I love working everyday with my teammates to uphold this expectation.

Q: Will it be tough for you not being able to play all three sports in college?

It will definitely be different not playing three sports in college. I’m sure my time commitment to sports won’t change since I’ll be training for lacrosse all year. I may try and Pursue football in college as well, but that’s a decision for a later date. I will miss wrestling for sure, but definitely not the constant nose bleeds that come with it.

Q: Why is lacrosse the one that you have decided to pursue?

I’ve decided to play college lacrosse instead of wrestling or football because of how much fun lacrosse is. The IQ needed to play lax is different from any other sport, and I feel this gives me an edge on the field. Also, it’s worth mentioning that being allowed to take an opponents arms off with a metal pole for fun is a pretty good deal to me.

Q: What drew you to Amherst?

I knew Amherst was the place for me the moment I stepped on campus. Besides the the fact that Amherst is undoubtedly one of the best colleges in the world academically, the atmosphere at the school is unlike any other I visited. It is a relatively small school, but it has a big school vibe since it shares a town with UMass. Most importantly, Amherst is the standard for high level lacrosse, and that’s what I have always wanted; to be the best. I can’t wait to start working towards bringing another National Championship home to Amherst.

Q: What is going to take for CSH to get over the hump this year?

I’m sure I speak for all my boys at CSH when I say we will be beyond motivated this year. Losing two years in a row, in the LIC, by a goal both times, leaves a terrible taste in your mouth. This year we can’t take any days off. We are going to stick together and grind everyday at practice. If we do that, the rest will fall into place.