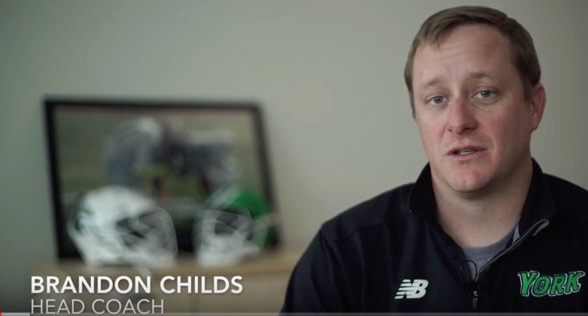 Brandon Childs was a fantastic lacrosse player in his day. Childs attended Lynchburg College and flourished as a member of the school’s lacrosse team. During his tenure at Lynchburg, Childs compiled 193 points, he netted 91 goals and added a school record 102 assists. Upon graduation Brandon stayed with the program becoming an assistant coach while he pursued his Masters’ degree. In 2011 he was named head coach of the York College Spartans. He has been a tremendous presence in the York community, and the production on the fields shows his impact. In his fourth season as head coach he led the Spartans to a share of the Capital Athletic Conference regular season championship, and a trip to their first ever CAC title game. 2018 was the apex of Childs coaching career, he was recognized as the United States Intercollegiate Lacrosse Association NCAA Division III National Coach of the Year. That season he brought the Spartans to the elite eight of the NCAA tournament, their second  such trip in three seasons. The Spartans reached the elite eight again last year, and with a slew of excellent returns and an exciting incoming class this may just be the year Childs and the Spartans break through.