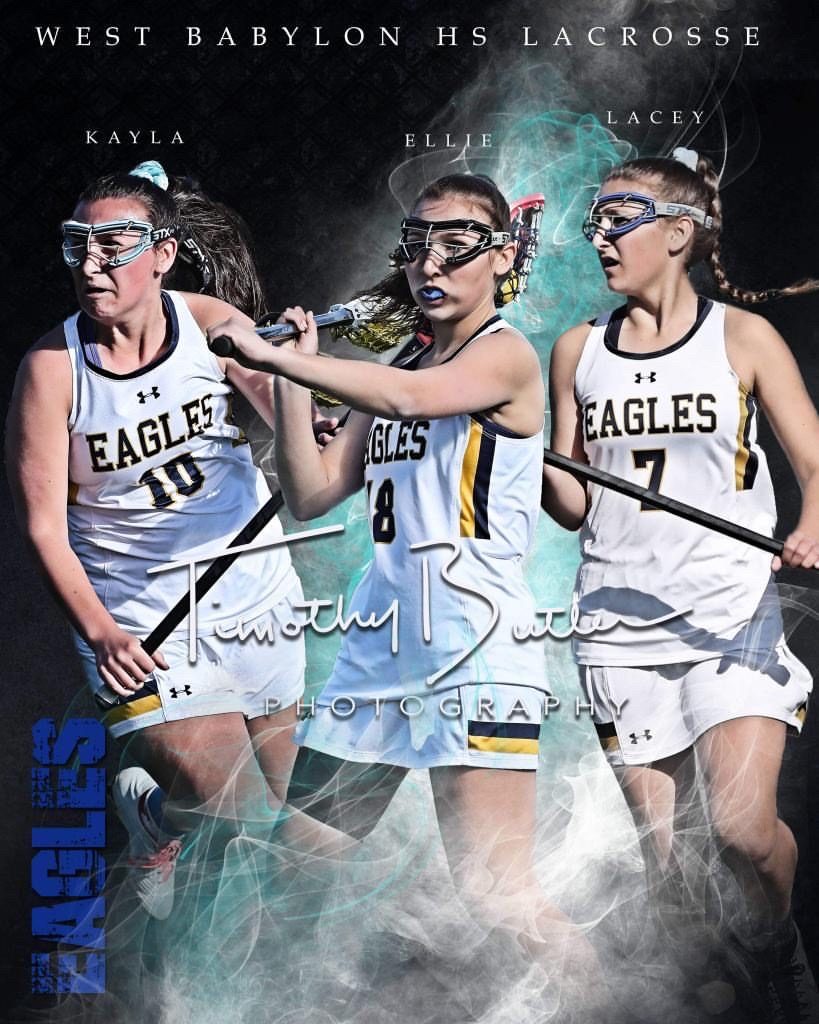 Kayla lit Suffolk county on fire last season. As a senior, she finished eighth in Suffolk county with 91 points. The senior midfielder was a leader of the West Babylon team that rostered her two younger sisters, Lacey and Ellie.

The Downey girls compiled a 14-4 record during their big sister’s final campaign as an Eagle. Kayla netted a season-high eight goals against Comsewogue early in the season, and the torrid scoring pace did not slow down for the Eagle’s star. Putting 60 in the net is a remarkable milestone Kayla achieved, and proving that no moment was too big for her, she put in six during the team’s semifinal victory over West Islip. The fairy tale season came to an end, with a gut wrenching one goal loss to Eastport South Manor. Kayla put up two points in defeat, capping her incredible Eagle career. Kayla Downey is now enrolled at Stony Brook, the local product stayed close to home and is ready to continue her scoring powers at the collegiate level.

Q: How have you been adjusting to college?

When I first moved in it was a huge adjustment, but I adapted to the college lifestyle fairly quickly. Finding time to eat is one of my biggest struggles due to my crazy schedule but I am starting to figure it out. Lacrosse is definitely a change. I never thought  I would be learning things about the sport that I am. I am thankful for the coaching staff that we have here at Stony Brook because they have the sport down to a science.

Q: What was it like being able to play with your two sisters?

I am very blessed that I was given the opportunity to play alongside two of my sisters. My family and I would talk about the three of us playing varsity together since we were in elementary school. I know sometimes I would yell at them on the field but it was only because I love them. Ellie would just roll her eyes and Lacey would start yelling back. Yes we fought sometimes, just like sisters do, but we always brushed it off right after. Before you knew it, we were helping each other score goals. The one thing that I absolutely loved was that we always had each others backs on the field no matter what. I always knew if something happened Lacey and Ellie would always be there to back me up. A missed shot or a bad pass, they always lifted me up and I am thankful for that.

Q: What do you think your legacy is at West Babylon?

Having 3 younger sisters I knew I had to start my family’s legacy in West Babylon athletics. Being the oldest sister it held me to a very high standard. I knew that I had to steer not only my teammates but my sisters in the right directions.Playing multiple sports in a year has shaped me to the student athlete I am today. I found that balance between school and sports that not many people at a young age can. I have a lot of pride in my town and wearing a different jersey every few months led me to the legacy I hope to have left for future athletes.

Q:What are your expectations for the team this year?

After playing with this new team for a little over a month, I believe that this team can definitely make a national championship run. That has always been the goal since day one and I think this is the team that can do it. Ally Kennedy and Taryn Ohlmiller are incredible players and I think they can definitely lead this team to the top. If we keep working hard everyday in practice we can make our dreams become reality.

Q: How do you want to improve as a player?

There are two things I really want to get better at, dodging and not stopping my feet when I feed. I have a really bad habit of feeding with my feet planted and staring at the place I want to feed the ball. In high school I would get away with it but now at the higher level defenders are smarter and faster. Coach always tells me “two steps” and it helps me.

Q: Where do you see yourself after college and how does lacrosse play into that?

I would say I have a pretty abstract plan after college. My goal is to get my undergrad in Biology and my masters in education. After I receive my masters I’d like to go into the FBI. The reason I want to get my masters in education is because god forbid the FBI doesn’t work out, I have something to fall back on. If I become a teacher, I would love to coach varsity lacrosse. After being with Coach Spallina for a little over a month I have learned so much. Hopefully I will be able to pass along everything I’ve learned from him to my players.

Swell Taco in Babylon has the best tacos! I always get the buffalo chicken taco and the crunch and munch taco.