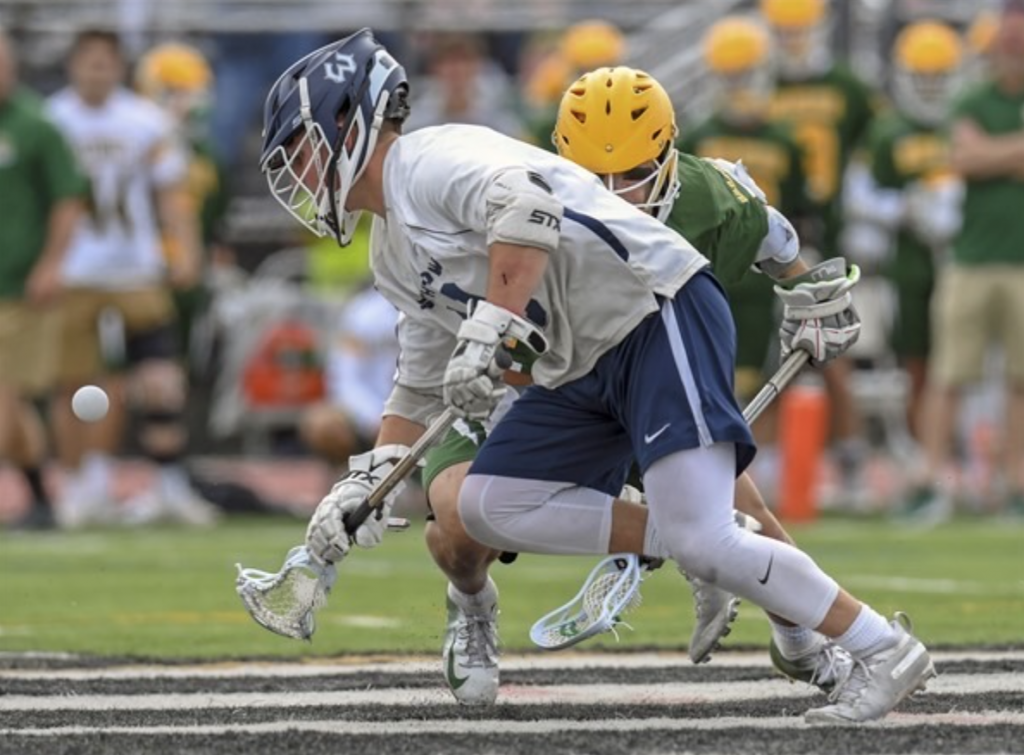 When Conor Calderone is on the field faceoffs are a forgone conclusion; he will win. The long time Smithtown West star is one of the best faceoff players Long Island has ever seen.  During his time as a Bull Calderone was routinely acknowledged as an elite player. Three times he was All-County, three times he was All-Long Island and three times he was named specialist of the year. On top of the local accolades, twice he received national recognition as an All-American. To top off his outstanding high school career Calderone won the Lt. Ray Enners Award as the most outstanding player in Suffolk County.

Calderone’s personal success helped lead his Smithtown West team to a 31-5 record during his past two seasons. Conor played some of his best lacrosse during the highly competitive Suffolk Class A playoffs. In the semi-finals against West Islip Calderone put on his usual stellar performance winning 18 of 20 faceoffs, and he added a goal in the Bulls 14-4 win. In the finals Calderone and the Bulls lost a heartbreaker in overtime to Ward Melville. Calderone’s high school career is still one for the record book, and now he is beginning the next phase of his lacrosse journey. He accepted a scholarship to the University of Maryland and prior to his debut as a Terrapin, Conor took some time to answer some questions for the LILJ.

Q: How has the transition to college been so far?

The transition to college has definitely had its ups and downs. It’s very weird being away from home for the first time and being away from your friends and family. Being surrounded by such great people here makes it much easier. Getting adjusted to a college level workload and the speed of the college game is takes some getting used to, but there is a lot of support here at UMD and it really has been a lot of fun.

Q: Why did you choose Maryland?

I chose Maryland for its great lacrosse tradition as well as the strong academics it provides. The coaching staff really stood out to me in the recruiting process. They are a staff that truly cares about their players and will do anything to help us succeed.  Maryland was the place that I saw myself having a great career and a place that instantly felt like home.

Q: What are missing most about Long Island?

What I miss most about home and Long Island is without a doubt my friends and family. Growing up with such a tight family and a friend group that was always together it was hard to leave. Of course I also miss the great food like bagels and pizza.

Q: What are your takeaways from a devastating loss to end your high school career?

Obviously an overtime loss is not the way I wanted my career at Smithtown West to end. I was really proud of the way my team fought our way back in that game and I think we showed a lot of great things. It’s unfortunate the game didn’t end the way we wanted it to. Even though it hurt to go out that way, it also taught me how to deal with adversity.

Q: Who had the biggest impact on you as a lacrosse player?

I’d say my parents have had the biggest impact on me as a lacrosse player. They have provided everything for me to be as successful as possible as both a player and a person. They sacrificed so much for me, whether it’s travelling to summer tournaments, driving me to practices, being at all my games or buying my equipment they were always there for me. They have been such great role models and since the day I was born and have taught me so many that translate to the lacrosse field.

Q: What have you gained from being a part of the U19 USA training team?

Going through the U19 USA tryout process and being a member of the training team has helped me grow as a player and person. It has helped set me up for the workload and speed of Division 1 lacrosse. It has been a great experience that taught me so much, and it is such an honor to wear USA across my chest. An opportunity I never take for granted.

Q: What goals do you have for this upcoming season?

My goals for the upcoming season are to learn and grow as both a player and a person. I am excited to learn from the great upperclassmen and amazing coaches we have here at Maryland. I hope to be able to contribute to the team in any way possible and help us win a national championship.

Q: Where do you see yourself after school and does lacrosse play a role in that endeavor?

After college I would love to stay involved in the game as much as possible. Whether that’s continuing to play after college or transitioning into the coaching world. I see myself being around the game for years to come. I have gained so much knowledge already, and will only gain more during my time at Maryland, I hope to help those who come after me to continue to grow the game.