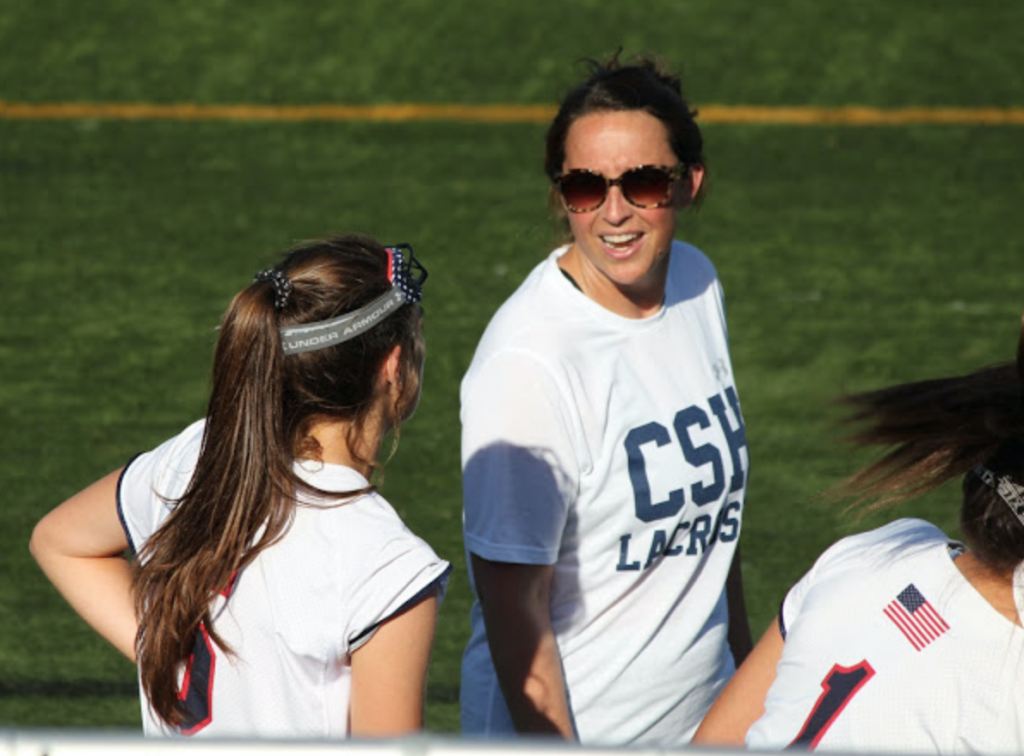 I was always involved in sports but I started lacrosse pretty late, almost middle school aged.  I slept over a friend’s house and went to her town game the following morning. Ended up on the field that day, came home and said “I have to become a lacrosse player”.  I immediately fell in love with the sport and tried to be around it as much as possible. From that moment on I was a 3-sport athlete.

I went on to be an All-American at Farmingdale HS (Tracy Wiener) played club lacrosse for the queen bee (Carol Rose) and received a scholarship and became a captain at Hofstra University.

Q:How did you get into coaching?

Coaching is something I feel I was meant to do.  As a young athlete I worked camps, clinics and gave more lessons than I can remember.  I coached travel for the Long Island Elite Yellow Jackets for years and Shelley (Hofstra now JMU coach) even provided me the opportunity to be the graduate assistant after my senior year.  As much as I enjoyed being at Hofstra, alongside some of my past teammates, I ended up taking a leave replacement for PE in Connetquot that spring and coached their JV team. That following summer I interviewed with Jim Amen at CSH and landed my first High school team at 23 years old.  Looking back, I was probably a little young to take on this role but couldn’t be more grateful for the opportunity. I was extremely young, competitive and gave myself a timeline that wasn’t quite long enough. At the time my brother was about to be two-time NCAA champion at Hopkins and I desperately wanted to have more rings than he did.  Plus, I told my HS coach she couldn’t retire until I beat her one day.

Q: What is your motto

My team would laugh at this question.  I love inspirational messages, quotes, songs, videos and I share them often. Here are some of my favorites

Worry about the things you can control

Roles- everyone has a role and every role is important

What are you doing when no one is watching.

United front- be on the same page

Q: How do you motivate a teams that has won back-to-back titles?

Obviously we do put an emphasis on winning but there are so many other important parts to being on our teams. The girls do an excellent job at motivating each other daily.  Since this is a high school team the spring in the last season they’ll play for their school. It’s the last time these seniors will wear their school colors. We always talk about leaving something behind and leaving your jersey in a better place than when you first got it.

I have many highlights and moments that will stick out forever. The championships would be the easy ones to name, but career wise 2014, the year we lost at states sticks out the most. Those girls gave this program the biggest break through its had.  They put us back on the map and fought to the end. They didn’t win their final game, but they were certainly champions. The groups that came before the ones who succeeded laid the foundation to our success. They are the reason the teams now are as good as they have become…I will never forget that team or year.”

Q: What are your expectations for the upcoming year?

This season we have the same expectations we have every season.  To be prepared, to work hard and to be better in May then we are in March.   It’s never easy to win or to keep winning and we have some big shoes to fill, but I think the standard are set high and we have no plans to lower them anytime soon.