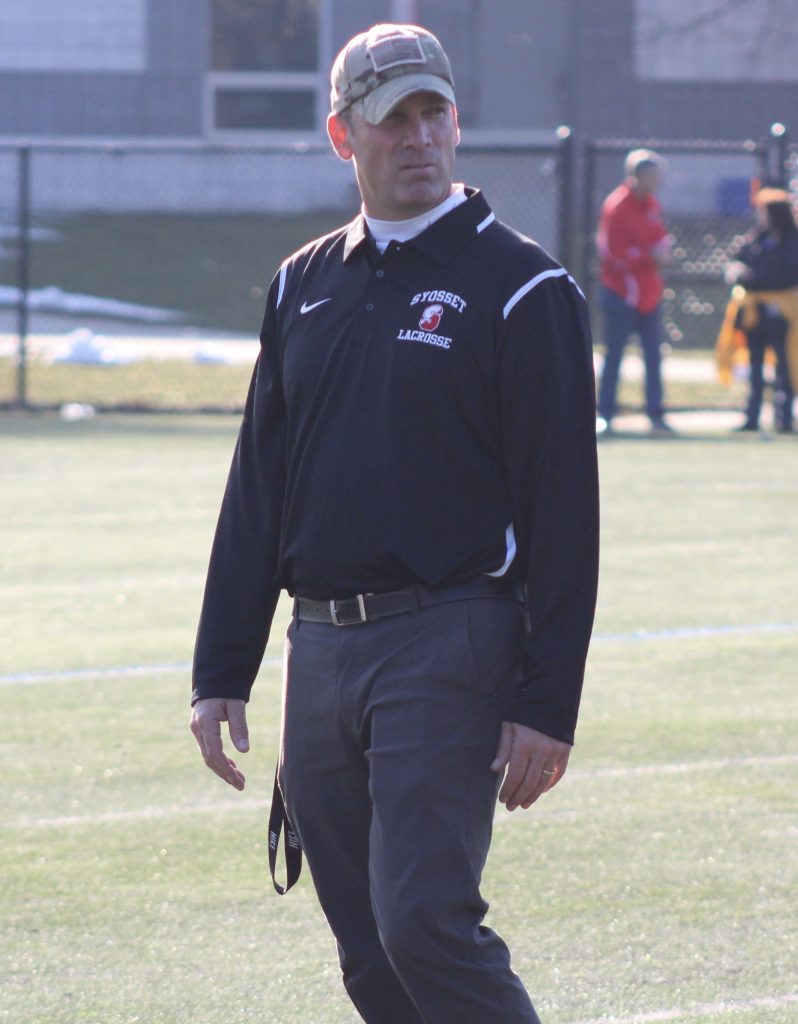 John Calabria has taken Syosset and turned into a town that’s known for very good lacrosse. With five county championships and 2 long islands under his built, the Braves of Syosset have become one of Long Island’ top programs. Year after year, Coach Calabria gets the most out of his players with his tireless effort, unlimited experience, and passion for molding boys into young men. What’s most amazing, players consistently come through his program prepared to take on the college game at some of America’s premier programs. Mac O’Keefe (Penn State), Lucas Kotler (Yale), the Cohen brothers (Harvard), to name a few, are all studletes who have come through John Calabria’s guidance before dominating at the next level.

Tune below is as Coach Calabria talked with LILJ staffers about his lacrosse background, how he got into the art of coaching, and more.

Q: What is your lacrosse background? I graduated from Sachem North HS and played Football, Wrestling and Lacrosse.  I was an All County Lacrosse Player both Junior and Senior Year – Graduated 1989 played for Rick Mercurio. I attended Adelphi University from 1989 – 1993 and played 2 years Division 1 and 2 Years Division 2.  We were Division 2 National Champs in 1993 and i was a 1st team All American Attackman. I was the team MVP and leading scorer

Q: How did you get into coaching?  I graduated Adelphi with a BBA in Business Management/Finance but got my maser in secondary education/History.  I got into coaching from working lacrosse camps during the summers

Q: Why coach high school?  I believe Coaching HS is an extension of the classroom and the development of young men.  I believe there is no greater triumph then grinding with teams and working towards an ultimate goal of winning a championship

“The Braves Lead The Way…ALL THE WAY!”

Q: How do motivate a team that lost in the county finals?

The 2020 team will play with an edge after losing 11-9 to Massapequa last season.  We were their closest game and will be determined to get back into that game in 2020.

Q: What was the highlight of your coaching career? I believe that every season is different with highs and lows.  I would say my highlight is bringing a Non-Playoff, run of the mill, easy beatable lacrosse program at Syosset and transformed it into a Long Island powerhouse program that has won 5 Nassau County Championships and 2 Long Island Championships.

Q: Is there a particular player or team that stands out to you?  There have been about 15 All Americans that have come through on several different teams.  Each year stands alone in my mind

Q: What are your expectations for the upcoming season?  I think this teams need to continue to get better, buy into coaching and show up on each and every game day!