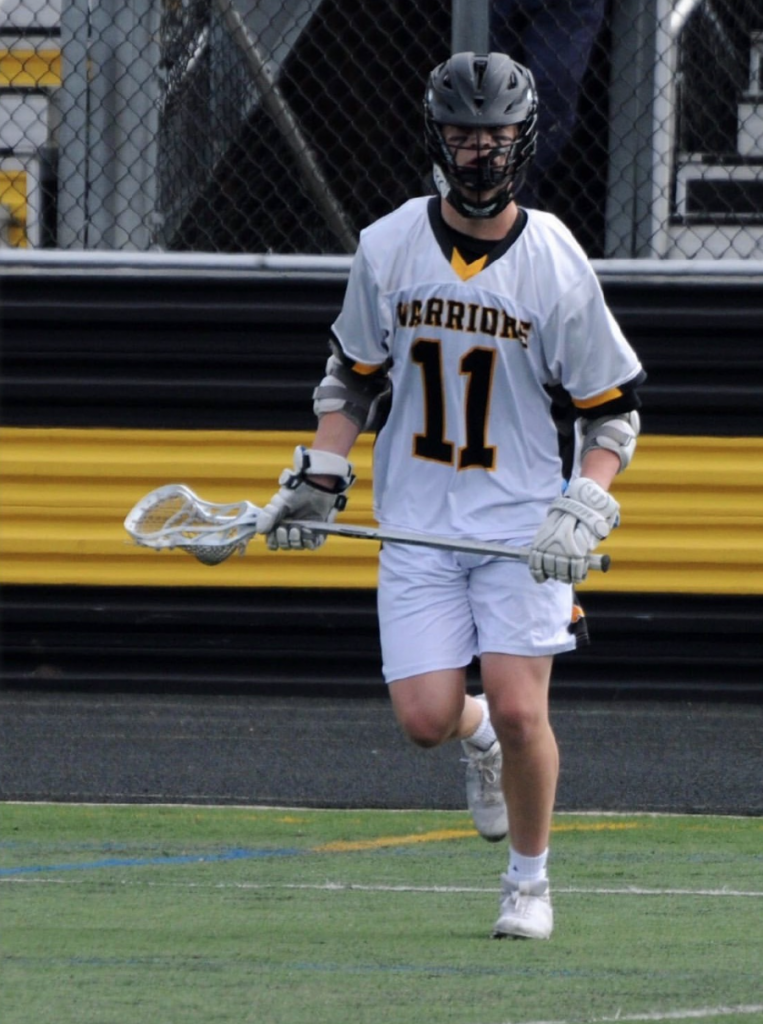 Touchdown Teresky! Nick Teresky just wrapped up a phenomenal senior season on the football field. The Wantagh running back rushed for over 1,000 yards and scored a whopping 15 TDs. The one pass Nick threw went for a 19 yard. Wantagh went 7-3 and  qualified for the Nassau Conference III playoffs. Nick embodied the spirit of a Warrior during their quarterfinal match against Mineola. He ran it in for two scores and even recovered a fumble while on defense. Unfortunately, Wantagh’s season came to an end that night; a hard fought one touchdown loss 28-21.

Teresky is now focused on the upcoming lacrosse season, where he and the Warriors are on a quest. It was an incredible regular season for the Warriors in 2019, and Teresky was no small part of their success. He put 35 goals and 30 assists, a very impressive stat line for anyone, let alone a junior. These were not empty statistics, the team matched his success by  going a nearly unblemished 10-1 in conference play. That record netted the Warriors the number two seed in the playoffs, where in the quarterfinals they matched with Mineola. Teresky played one of his best games, four goals and one assist in an easy 11-4 victory for Wantagh. The season came to an abrupt end in their following matchup against Locust Valley. Nick’s two goals were not enough as the Warriors were defeated 12-5. Now a year older and a year stronger Nick is ready to lead the Warriors one more time in 2020, but before he suits up he took the time to answer a few questions for the LILJ.

Q:How has senior been so far?

Senior year has been great so far as I’m really just trying to enjoy it. It’s already moving quickly as I just finished football and am into the basketball season. Last year playing with all the kids I grew up with so I’m just enjoying it all while I can.

Q: What was the highlight of football season?

Highlight of my football season had nothing to do with the accolades or individual awards but being named a captain. Being chosen by my teammates means a lot as I know they really trust me on the field and give respect. Being Captain of the football team was definitely a big chance but it helped me grow and mature. It made me become a better leader.

Q: Why did you choose Rutgers?

I chose Rutgers because it’s close to home and still away at the same time. I always had a liking for Rutgers growing up and I always wanted them to pick up the phone and call me when the time came. When I went on my visit in October everything felt right about it and I almost knew. The lacrosse program has a good thing going and I couldn’t be more excited to attend their university

Q: DId you ever consider playing football in college?

Football has always been great to me since I was little kid and I always had the thoughts of playing college football but whenever lacrosse season came around I always knew how I would want to pursue a lacrosse career in the future.

Q: Why did you gravitate to lacrosse?

I started gravitating towards lacrosse around the time I started playing travel for True Blue. Playing with other stands outs from across Long Island I always knew I had a bright future in the game.

I have big expectations for our team this spring as we came up short the last two seasons. We bring back many key players and I expect nothing less than being back in the county championship competing to bring one back for Wantagh.

Q: How do you want to improve?

Individually I want to improve my communication the most as I should be expected of that being a senior leader. Communication makes a team successful and could shape a season. It all starts day one in March so I will be very vocal.

Q: What is one thing, above all else, you want to accomplish before leaving Wantagh?

The main goal I have before leaving wantagh is to win that county championship. This entire 2020 class works so hard and I know their will be other kids playing for the same reason I am. You aren’t gonna remember how many goals or assists you put up in a season but you all will remember that feeling of winning counties.