Maria Themelis; No Time Off 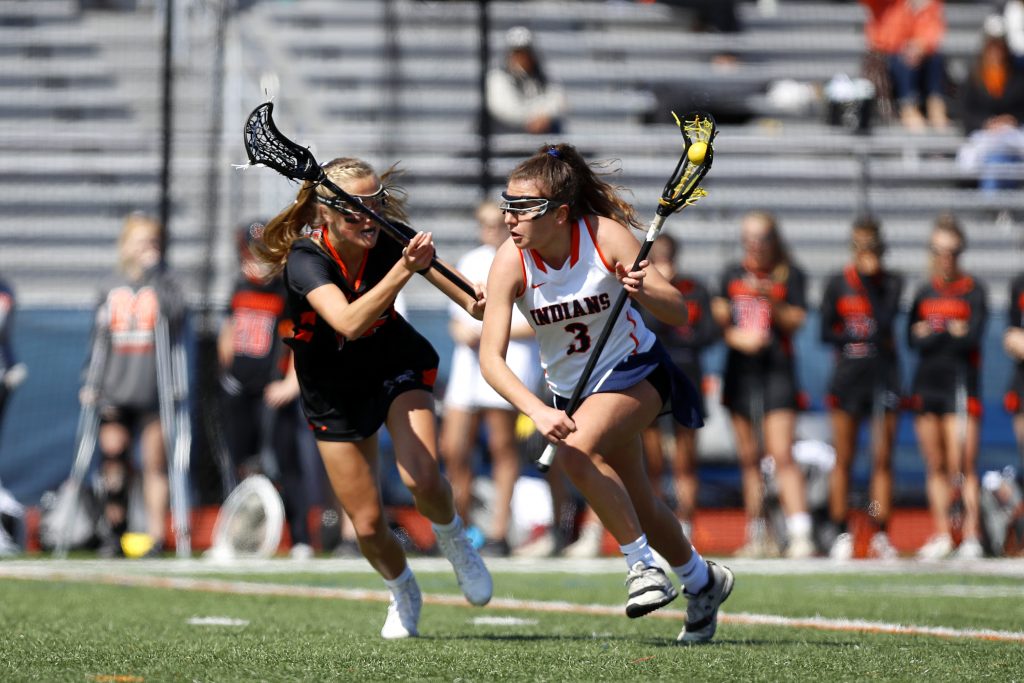 Not one, not two but three sports for Manhasset’s Maria Themelis. The senior studlete shines as a soccer, basketball, and lacrosse star for Manhasset high school. Recently she concluded an excellent career on the soccer field. The Indians went 7-10 on the season and Themelis played her heart out for the team, her final goal came during a September 28th match against Mepham. A 6-3 victory for Manhasset in which Maria also recorded an assist. With almost no time off Themelis has already begun her basketball season.  The season tipped off December 3rd and Maria put up a double-double in a 57-46 against Island Trees. Manhasset looks to improve upon their 17-5 season a year ago and after one game they look prime to compete for a county title.

There is no off-season for Maria Themelis, almost immediately after she’s done hooping she’ll jump right back into lacrosse for her final season on Long Island. Returning to the reigning Nassau county champions there is now a target on Themelis and the rest of the Manhasset team. Themelis is looking to take on a newfound leadership role as a senior. Personally, she is coming off an outstanding junior season scoring 35 points and 14 assists- what else would you expect from a point guard. The three sport star is always moving but found some time in her busy schedule to answer some questions for the LILJ.

The start to my senior year has been awesome! The first couple months have been really flying by so I have been making the most of every moment. I’m always pretty busy since I’m in season all year round, but I wouldn’t want it any other way.

Q: How was your final season of soccer at Manhasset?

My final season of soccer at Manhasset was so much fun, and I still can’t believe I’ll never be wearing a Manhasset soccer uniform again. However, I’m so thankful for all the lessons I’ve learned from this sport and I can’t thank my coaches enough for everything they have done for me over the years.

Q: What are you most excited about for this upcoming basketball season?

I’ve always had a special spot for basketball because it was one of the first sports I ever played as a kid. I have been through so much with my varsity basketball team, and I’m so happy that I have been such a huge contribution to building the basketball program into what it is today. I hope to help guide the team to our first Long Island title since the 1986. I watched my brother win it last year, and I hope to follow in his footsteps. I’m also so excited to play with my basketball teammates again. A few of us laxers have been on the basketball team together for 4 years now, so we’ve created such a strong connection on the basketball court which also transfers to the lacrosse field.

Q: How do your soccer and basketball skill aid your lacrosse game?

I have been the starting point guard of my basketball team since my freshman year, and this helped me develop leadership qualities on the court since I have to call out all the plays, as well as having good vision to draw my defenders and then dish it out. This has definitely transferred to the lacrosse field because I usually play at the top of the 8 and set up our offense.  So, my role on the basketball court and the lacrosse field are very similar to each other. In addition, we play a lot of different zone defenses in basketball, where we have to pass on cutters to our teammates and protect our individual zones. Our zone defenses in lacrosse work the same way so basketball definitely helps me a lot. Also, soccer requires the most conditioning out of all 3 sports, especially since I play outside midfield, so playing soccer in the fall keeps me in very good shape. I usually use my speed to run down the outsides and then cross it to the middle. So, soccer has helped me have very good field vision to see where different cutters are.

Q: Did you ever consider playing basketball or soccer in college?

Although I love soccer and basketball just as much as I love lacrosse, I always knew I wanted to play lacrosse in college. From living in Manhasset I have always looked up to the plethora of successful lacrosse players who have came out of Manhasset High School and went on to break records and make names for themselves in college. Having them to look up to definitely played a role in me wanting to play lacrosse collegiately.

Q: Why did you choose Penn?

I chose Penn because it has everything I’ve ever wanted in a school. I plan on majoring in business and the Wharton School is one of the most prestigious in the country. Also, not only is Penn competitive academically, but the lacrosse team is extremely competitive as well. Whenever I went to Penn camps, I saw how close all the girls on the team were. With such a strong team chemistry and an amazing coaching staff, Penn lacrosse has been successful year in and year out, and I can’t wait to be a part of such a special group of players and coaches.

Q: What has been the highlight of your athletic career at Manhasset?

I have been lucky enough to play in big games in all 3 sports throughout my high school career, but I would say the highlight of my athletic career would have to be my sophomore lacrosse season. We opened up against Cold Spring Harbor and lost 10-9, which was not the way we wanted to start our season, especially after not even making it to the county championship our previous season. However, we kept working hard and from that game on we never looked back. We had a group of 6 amazing seniors who were all great leaders, and our team chemistry was like no other team I’ve ever been a part of. We went undefeated the rest of the way, which included wins against Darien, St. Anthony’s, Garden City, and our double over time LIC game against ESM, which is a game I’ll never forget. That season was an eye opener for all of us because what paved the way for our success was our team chemistry. We were not the most talented group that’s ever came out of Manhasset, but we played as one team. “One” was our motto that season, and we definitely exemplified what it means to be “one” team.

Q: How do you want to get better this season?

As a senior, I want to lead by example and be a good role model for all of the underclassmen. I’m fortunate enough to have had such great senior classes in the previous years and I hope to teach all the underclassmen as much as the previous seniors have taught me. Our team has one of the tougher schedules in the country. Outside of playing all the great teams on Long Island, we also play powerhouses Darien and McDonogh. So, it is my job as well as the rest of the senior class to be leaders on the field and to always play with a chip on our shoulders, in order to win the big games.

Q: What are your expectations for this upcoming season?

Every year our goal is to first win counties, then LIC’S, and lastly to win states. The way we practice is the way we play, so I expect our team to push each other every day to get better at practice. We always take things one game at a time and we need to remember to always keep our foot on the pedal if we want to achieve our goals.