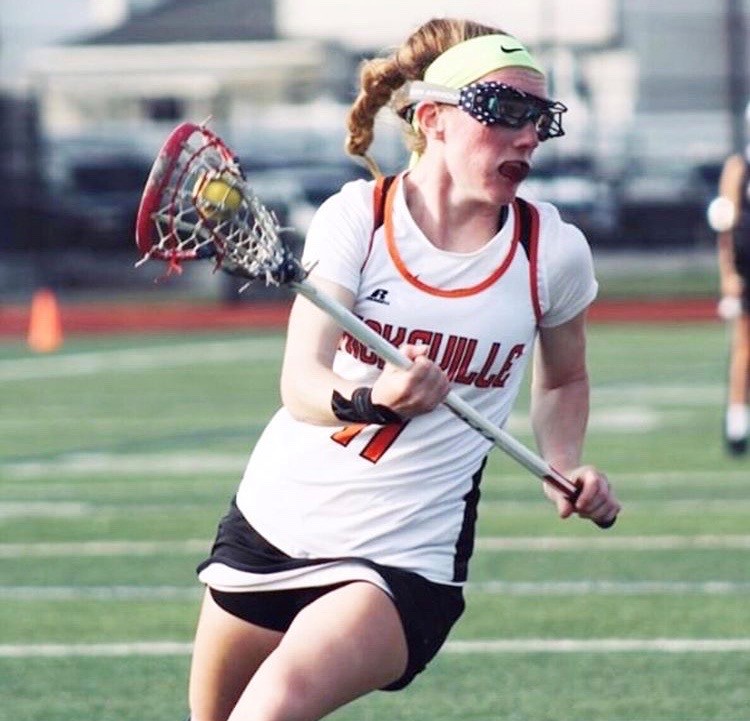 Goal, goal, goal, goal, and goal! That’s five, one for each year Kerrin Heuser played varsity lacrosse at Hicksville High School. The star midfielder is the school record holder with a whopping 225 career goals, peaking with 63 during her senior year. Heuser is a truly gifted offensive player her ability to score at will is truly one of a kind. She garners speed and endurance from her career running track at Hicksville. Through her high school years she ran both Cross Country and Winter track, and was one of Nassau’s most feared runners.

Kerrin didn’t go far for college, joining Joe Spalina and his vaunted Stony Brook Seawolves. The Seawolves already bolster one of the nation’s best teams and with Heuser’s scoring prowess the sky’s the limit for a Seawolves team still looking for that elusive national title. Heuser is just a few months away from her collegiate debut, and before the dawns the navy and red for the first time she answered a few questions for the LILJ.

Q: How has transition to college been?

My transition to college was difficult to say the least. Not only managing my school work but also lacrosse took some time. But besides those two things, finding time to get rest and eat was also challenging. Here at Stony Brook we are known for our “blue collar” mentality so getting extra reps and runs in is extremely important. Therefore, it took me getting up a little earlier to get to the wall or to go on a run to keep that “try hard” work ethic that Stony Brook athletes are known for. However, as I create a schedule for myself each week I learned how to manage everything.

The reason I chose Stony Brook was due to the University having an intense medical program but also a fantastic lacrosse team with amazing coaches on top of that. When I got the chance to come here I didn’t think twice about it because not only was I going to get a great education, I had the opportunity to play for Coach Spallina who I knew would make me into a better player and teammate. Stony Brook was my dream school ever since 8th grade and everyday I would work harder so I could achieve that dream. Therefore, commiting here wasn’t only a dream come true, I knew I would come out of Stony Brook being a better athlete and also a better student.

Q: How does your track experience help you on the lacrosse field?

.My track experience has helped me on the lacrosse field tremendously. As a midfielder, getting up and down the field at the fastest time possible for a long duration is the most important thing. Therefore, I knew I had to do cross country and track when I got the chance. The training I did in track and cross country not only built up my speed and stamina, it also made me more mentally tough as every race was more of a mental game then actually physical. As everyone says I’m a “psycho” because I love to run, I do it because I know I can be a better lacrosse player if I’m in the best shape.

Q: What was the highlight of your lacrosse career?

My highlight of my lacrosse career was breaking my high school record for most goals. Breaking the record was such a humbling experience and It was good to know by hard work paid off! However, breaking the record wouldn’t be possible without my team and the late nights at the wall and field shooting around with my mom.

Q: Is there anything you would have done differently last season?

Something I would’ve done differently last season would ironically be to take more recovery time. As the weekend were light during lacrosse season with either having Saturday practice or a game and Sunday off, I would go for mile runs and after that I would go to the field to shoot around and get extra reps in. However, as the season started to come to an end, my body was shot and recovery was well needed but I didn’t listen to my body. Therefore, if I had to change something it would be to take Sunday runs out of the equation and just stick to shooting and wall ball for the weekend

Q: What is the most glaring difference between your high school team and your college team?

The most glaring difference between my high school team and college team is the speed of practice. As college lacrosse is much faster than high school lacrosse, I knew practice was going to be very different. As our practices here at Stony Brook are fast paced and tough, It makes us even better for games and gives us a chance every day to compete against one another so each of us can get better.

Q: What are your goals for this season?

My goals for the season is to see myself on the field but as a team our sole focus is to win the National Championship. I have total faith in this year’s group which is led by a tremendous senior class who deserves to bring the trophy home to the Island. Therefore, every practice  and extra reps outside of team practice is so I can contribute my best lacrosse skills to this team who deserves taking home the title.

My ideal goal post college would be working as a Nurse Practitioner. As my passion and love for lacrosse is tremendous I hope that lacrosse will play a role. After gaining so much insight from Coach Spallina and the rest of the coaching staff here just from fall ball, I hope to pass on that insight to the younger generation of lacrosse players.