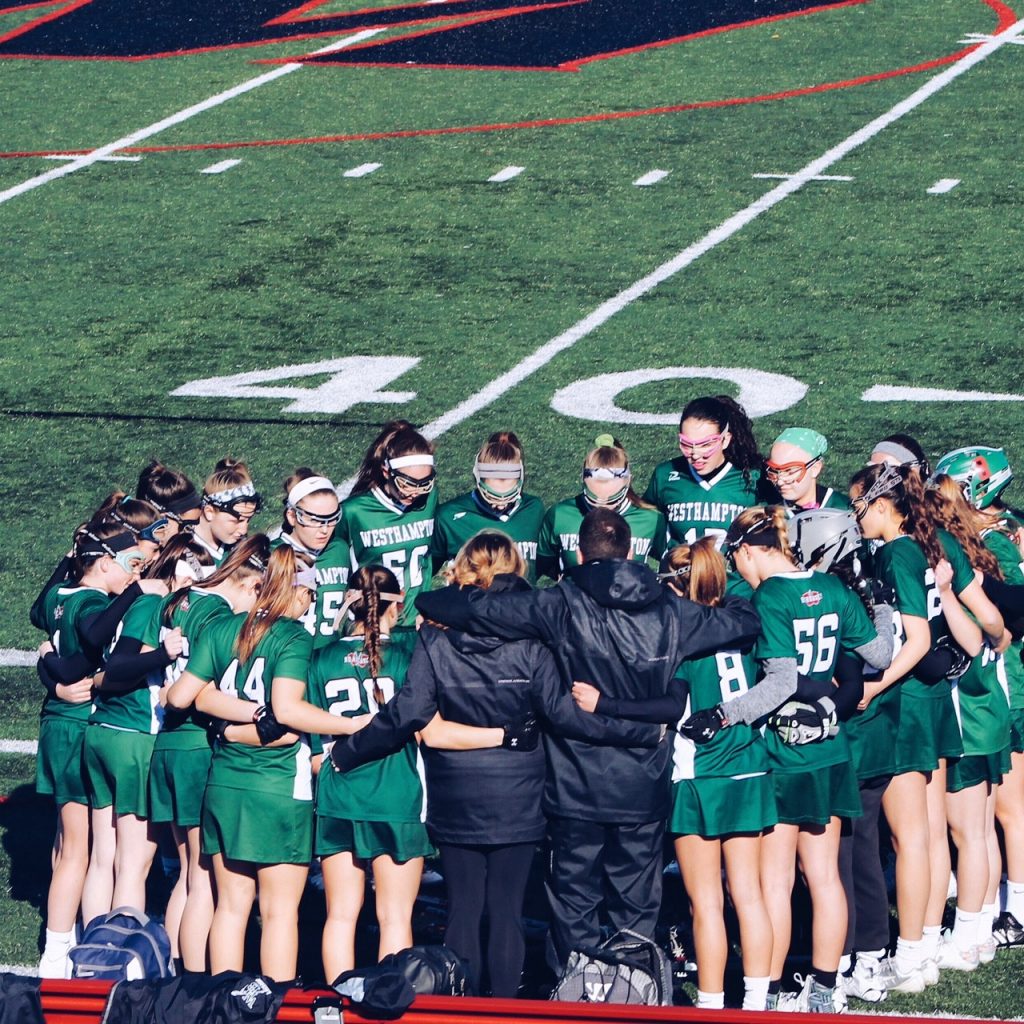 Mary Bergmann has been instilling an All or Nothing mentality amongst her Westhampton girls since Day 1. This has paid dividends as her Westhampton program has steadily risen towards the top of Suffolk County Class C. Being a Championship contender and knowing how to win it all certainly isn’t something Mary is a stranger of. Learn more about Mary’s story, what inspires her, why she got into coaching, and where the Hurricanes are heading in 2020.

I actually only started playing lacrosse my junior year of HS because it was a first-year sport that year.  I fell in love instantly and spent that summer going to every camp I could go to. I wound up picking it up pretty quickly and was talking to Hofstra, SBU, CW Post, and St. John Fisher College.  I wound up picking Fisher because it was a new program and they felt I would be a four-year starter (which I was). It had the best facilities out of all the schools and they also offered me the most money.  After college I thought I was going to go get my MBA, but the English Lacrosse Association recruited me to work for them following college so I declined my acceptances for grad school and made the move to England.  I worked there for a year coaching and playing lacrosse and that led me to international lacrosse. I ended up guest coaching in Czech Republic and playing for the Netherlands National Team from 2008-2012.

Q: Why did you get into coaching?

Ultimately the whole experience above got me into coaching.  Since I was travelling back and forth from Europe, coaching was the perfect fit for me. After England, I wound up coaching at Miller Place for three years when the program was pretty young. I was the head varsity coach but honestly didn’t really know what I was doing.  In 2009 I was given the opportunity to be the JV coach at SWR under the legendary Bob Vlahakis and for three years I learned so much. When he retired he turned the reigns over to me and I became the head coach at SWR for three years. In 2014, I was given the opportunity to be a full-time physical education teacher at West Hampton Beach High School, and it just so happened that the Varsity position opened at the same time.  It wound up being one of the best moves I could have made and I have been at WHB since then.

Q: What makes your program unique?

WHB is such a great community.  It is very close knit and fairly small as we are in class C.  Most of our athletes play at least one other sport during the year and many participate in all three seasons.   This makes how we handle off season stuff different than some of the other schools that we compete against. Something that we have done every year is travel for three days for team bonding.   We do a day of project adventure, participate in scavenger hunts, and we always play New Canaan in CT for an always competitive Non League game.

Q: What is your motto?

Our motto has always been a Dutch saying with is Alles of Niets which means “All or Nothing.”  We try to teach the girls that it is very important to give it everything you have every day. This translates to life as well.  Love what you do and do it well. Give your passions everything you have because life is too short for mediocrity.

I would say that I have a bunch of highlights.  While the easy one would be to say winning a state championship in 2012 at SWR, there is really a bunch of moments that all come to mind.  The one thing all these moments have in common are they are moments that we accomplished something that deep down we weren’t sure was possible.  Those three different moments were 1. Beating Islip in 2014 for our programs first ever playoff win.  2. Beating Huntington senior day and last game of season (I think this was 2015 but not sure) to slide into the last spot of playoffs.  Huntington was undefeated that year and we were not supposed to win that game. It was an overtime game and we won 14-13.  3. When we beat Bayport in 2018 for the first time in program history to punch our ticket to the County Championship game.  All three of these moments were awesome and it is so much fun to see the girls experience these amazing wins.

Q: Coming off a semifinal loss how do you motivate the team this season?

Last years loss was tough, but Bayport was the better team.  We use their strengths to motivate us. We have started winter league and will be starting open fields soon so as coaches we try to get the upper classman to help motivate the new comers.  The upperclassman this year have been in this program since I started coaching at WHB and there is definitely a feeling of wanting to get the job done as they come to the end of their HS careers.  We definitely try to keep reminding them that we are considered one of the top teams. Six years ago, it was amazing just to win a playoff game and now we have our sights on getting back to that championship game.