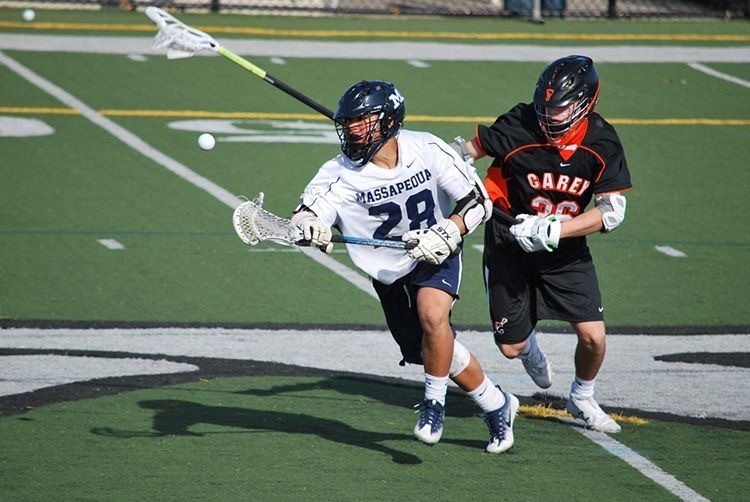 Angelo Petrakis is a young man of perseverance, athleticism, and toughness. His stand-out High School career at the face-off X and on the wrestling mat, led him to one of the most demanding academic and athletic institutions in the country, Cornell University. Not only does Cornell attract some of the brightest minds, it has one of the richest traditions in college lacrosse. Petrakis is no stranger to storied programs. Massapequa is a perennial power in Nassau County. Last year, the Senior Chiefs led their tribe over the bridges of Long Island after capturing a LIC, to win the 2019 Class A State Championship. Hear more about Pequa’s journey to a state title and Angelo’s perspective on life after High School below.

How has the adjustment been to college?

The transition from Massapequa High School to Cornell has been challenging at times, however, I feel that my High School coaches and teachers did a very good job of preparing me for this portion of my life. Also, my coaches and teammates at Cornell have done a tremendous job of helping me acclimate into the University, both as a student and athlete.

What’s the biggest difference between the High School game and college game in your eyes?

As I have noticed thus far, I believe the biggest difference between high school and college lacrosse is the pace at which the game is played. I feel as if the shot clock in collegiate lacrosse provides a sense of urgency to always score, opposed to high school where teams hold the ball and stall.

How has wrestling made you a better lacrosse player?

I believe that wrestling is one of the best sports a young athlete can participate in. Not only does wrestling teach mental and physical toughness, but it also teaches balance and coordination which can be translated to any sport. As a faceoff man in lacrosse, it is directly correlated to wrestling in the sense that they both are a 1 vs. 1 matchup. Also, wrestling allowed me to develop mechanisms to distribute my body weight and fight for leverage throughout the duration of a face-off.

What was the biggest challenge last season in your state championship run?

Who was the toughest player you went up against on the faceoff x?

The toughest player I faced off against last year was James Ball and Tyler Sandavol of Chaminade High School.

Cornell offers an opportunity to compete at the highest level athletically while obtaining one of the best educations. I also fell in love with the program’s culture, the standards and expectations along with the competitive atmosphere that Cornell Provides will enable me to be the best possible version of myself.

I was originally committed to Lehigh before committing to Cornell. But other than that a few BIG 10 schools along with some other Ivy’s.

What is the goal in your freshman season at Cornell?

My goal in my freshman season at Cornell is to be the best version of myself and help my team in any way that I can. I want to provide a competitive nature at practice that is inspiring and will help guys get better each and every day.

Who’s on your pregame playlist?

To be honest, I rarely listen to music before games. But when I do, I enjoy listening to Drake.

Where do you see yourself after college and does lacrosse play a role?

I have always had an interest in Biology and the Human anatomy so I can see myself down the road pursuing a medical career. As far as lacrosse goes, I have not put too much thought into that far down the road. I’ve just been focusing on the present and how I can prepare for this upcoming season.