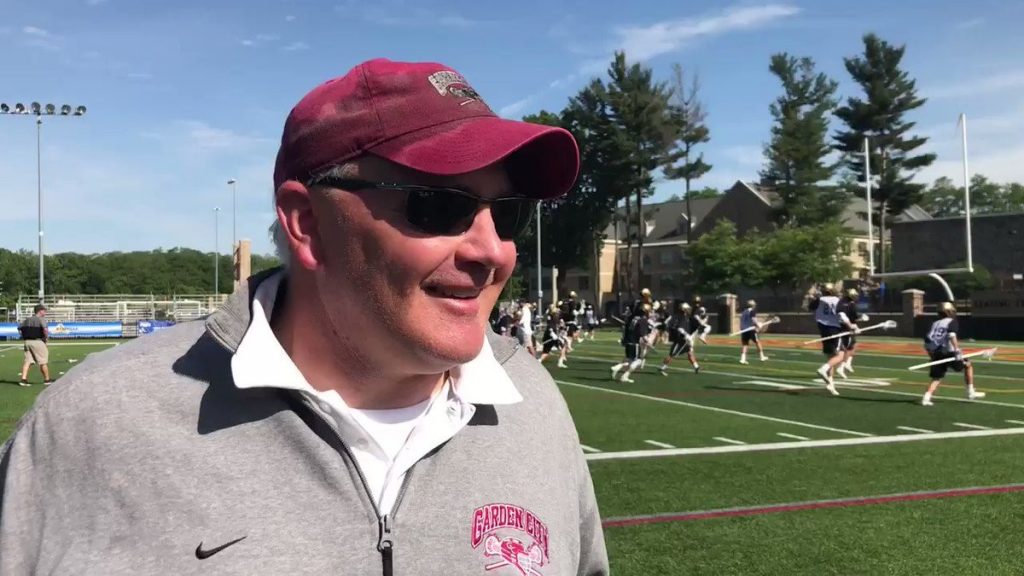 Steve Finnell will go down in history as an all-time great in Long Island High School lacrosse. His playing and coaching pedigree to match, are second to few. His impact on the Garden City community stretches well beyond his playing days in the late 80’s into the early 90’s. After a short stint coaching collegiately at his Alma Mater Duke University, Steve moved back home to Long Island where he would pursue High School teaching and coaching.

Coach Finnell took the time to share his story with LILJ. From GC studlete to one of GC’s most legendary figures in the community as a coach, leader, mentor, parent, and teacher; Coach Finnell has seen it all. If you ask Coach Finnell about his success as a coach, the credit is often with his supporting cast of great coaches, mentors, and players. Finnell is a master of establishing individual team identities, and getting his athletes to realize the power of Garden City’s athletic traditions. Take a minute to read more about Coach Finnell, one of the GOAT’s of LI High School lacrosse.

How do you describe this past football season?

Outstanding job by our seniors leading a “new” group to another County championship. We graduated many key players like Yeboah-Kodie, Hart, Coppola and Boccafola. You can not replace those guys – so we needed to find our identity.  We always want to play in the LIC and these boys figured out a way to get there. Very proud of them for that.

What is your lacrosse background?

Played at GC. Graduated in 1991. Went to Duke and played for Mike Pressler. Was a captain in 1995 and then coached at Duke as an assistant for two years. Went to Final Four in 1997 – Dukes first time ever. Coached at Mepham HS for two years with John Campbell.  Coached JV lacrosse at GC in 2002 with Tom Flatley and John Scorcia. Was Doc’s assistant from 2003-2006 before becoming the Head Coach in 2007. Fortunate to have coached with Doug Dwyer as well who was Doc’s assistant for 20 years while GC won 4 New York State titles.

Why did you decide to get into coaching?

Probably my experience with Tom Flatley and other mentors led me to teaching and coaching.  I became a Social Studies teacher in 1998.

What has been the key over the years in turning Garden City into a powerhouse lacrosse program?

Doc and Doug Dwyer made Garden City a powerhouse for two decades – that 20 year run is quite remarkable.  My hope when taking over was to build upon what the program had already accomplished. I feel great that we have been able to keep the bar raised – hopefully we can continue that but its a lot harder than people realize. We have had a great run of assistant coaches over the years that have made GC one of the top programs as well- Dave Ettinger, Joe Jacovina, Bryan Walker, Mickey Blum, and Tim Holman.

You have coached plenty of State championship and Nassau County winning teams. With that being said, are there any seasons that stand out more than the others?

2007 was my first season – great group of kids and parents to start with.  I have become friends with many of those boys as they are close to 30 years old now. The 2010 group got GC past the LIC for the first time in 10 years and started a 4 year run of playing in the State Finals. 2011, 2012 and 2013 teams had some of the best players to ever wear a GC uniform.

What has been your favorite memory from coaching?

2010 double OT game against Comsewogue for the LIC. Tommy Gordon scored on a fast break to win it, but it was the defense that made key plays to give us a chance.  In 2013, Dale Stasco scored with a second left in state semifinals vs an undefeated Niskayuna team. Play started with Justin Guterding dodging and moving the ball to Cody George, who found Stasco for the winner. In 2018 – Justin Coppola winning the face-off with :08 seconds left in State Final after we gave up on a two goal lead to Victor. He passed to Liam Muldoon who hit James Basile he scored the winner with :01 second left to help win the State Championship.

Do not really have one. GC sports are a tradition – I was lucky to be a part of it and want to share that experience with the current players.

What are your thoughts on the upcoming season?

We lost a lot of outstanding players – we will not replace them, that would be impossible.  Our boys are highly motivated to compete next spring – we will not be the favorite so we have some work to do. We hope to get to the County Finals and have a chance to win it.

Check out the play that won the 2018 NYS Class B State Championship right here. Video presented by Lax.com