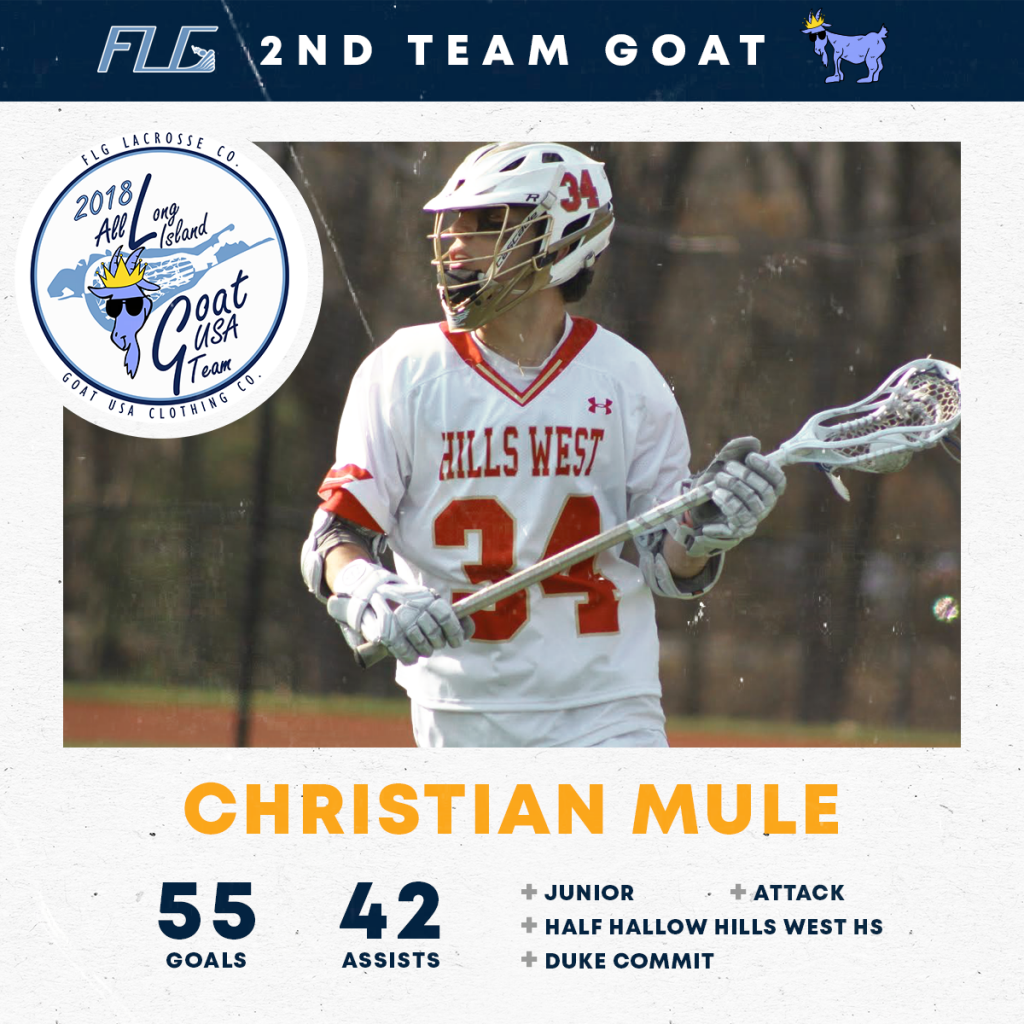 Christian Mule made one of the tougher decisions a high-profile, highly-touted recruit should have to make. After committing to his dream school, he was prepared to take a post-graduate year. This would give Christian the opportunity to refine his craft, and better prepare for his college experience. However, prior to starting his prep year, doubts began to creep in and another amazing opportunity came knocking on his door. Check out this exclusive interview with the LILJ on Christian’s recruiting process and what he’s up to now.

Q :What’s the biggest difference between the high school game and the college game in your eyes?

For me transitioning from the high school game to college game was definitely an adjustment. The speed of the game is much faster, the defensmen are way bigger, faster, and stronger. The window for skip passes closes up quick and the slides come quicker. Everything is a couple notches up but throughout the fall I continued to get more comfortable with the speed.

Q: Why did you decide to decommit from Duke?

Deciding to decommit from Duke was by far one of the hardest decisions I have ever had to make. Duke has always been a dream of mine since I was younger. I was told that I had to attend a prep year before getting on campus so that turned me into a 2020 and I played summer ball with Team 91 Crush. I was planning on attending Salisbury Prep for a year but as the summer went on I started to have some doubts. After meeting with Coach Cassese I knew if I wasn’t going to go to Duke that I wanted to play for him. At the end of the day I had to make a decision to go to a school that I was going to be the most happy because in the end that’s really all that matters. And for me decommitting from Duke and attending Lehigh was the right choice.

The opportunity to compete for a Patriot League Championship, the schools excellent academic reputation, Coach Cassese and the winning culture all drew me to Lehigh. Lehigh gave me an opportunity to get on the field right away, which to me means so much because I’ve always just wanted to compete. Coach Cassese and Coach Crawley are the real deal and I am excited to play for them. With Coach Cassese your getting a guy who has been through it all and knows the recipe to success. The opportunity to join one of my best friends Justin Tiernan who I played with my entire life and 91 teammate John Sidorski also played a big part.

Q: What other schools were you considering?

Before committing to Duke I visited UNC, Notre Dame, and Michigan

Q: What is the goal in your freshman season at Lehigh?

My goal for my freshman season at Lehigh is for us to win a Patriot League Championship, make the NCAA tournament and see where we go from there. We have had a great fall winning our three scrimmages against Marist, Hofstra and Syracuse but as the guys on the team and the coaches would agree we have a lot of work to do to be successful this season like we know we can. On a personal level I hope to be the best teammate I can, continue to grow as a player and learn as much as possible from our coaches.

Q: How were you able to have such a successful high school career?

I think in my opinion I had a successful HS career because of how much work I put in throughout my life playing lacrosse. Training all year long with my 91 coaches and teammates really helped me to take my game to another level. Playing in so many competitive tournaments growing up prepared me for my HS career. I tried to make sure I was always getting in extra work whether it was being the first one out on the field shooting before practice, or staying after and shooting. I think things like that and the competitive part of me is what led me to where I am today.

To be honest im not really sure what the future holds, I love the game of lacrosse and I hope it can always be apart of me but at this point im focused on getting the best grades I can and being the best player that I can be. Hopefully by doing that I can have a successful future no matter where it leads me.