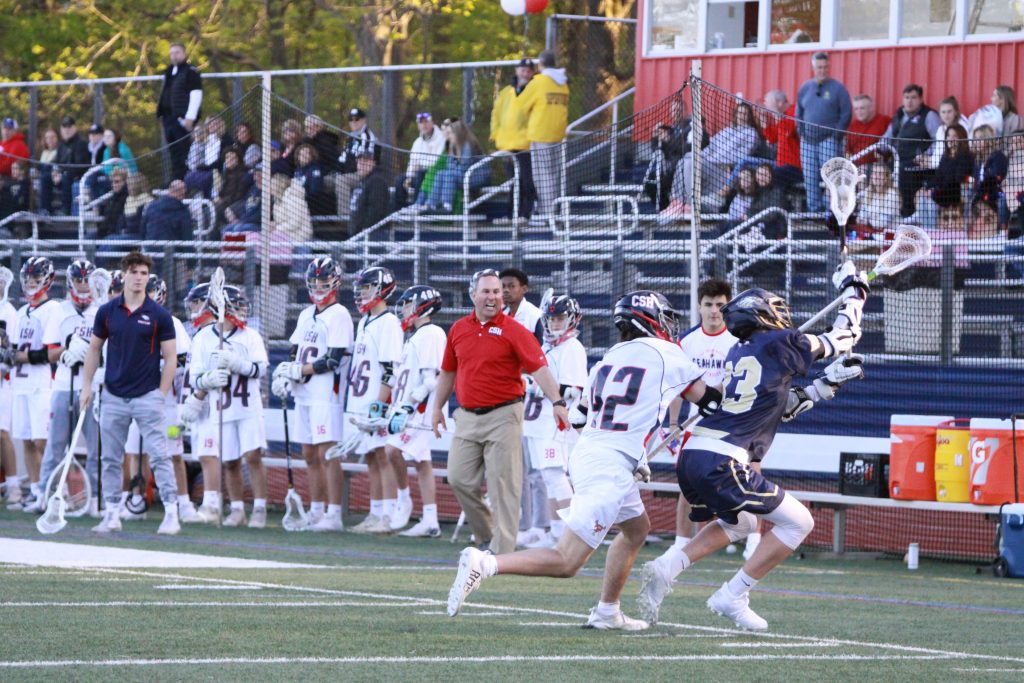 Earning a tough ground ball. Knowing your match-ups weakness. Reading the defense. Substituting at full speed. At Cold Spring Harbor, they always strive to take care of the little things. This mindset comes from the top down. For Cold Spring Harbor, Coach Bonn has instilled this mindset since he took over the program. To date, Coach Bonn has 4 State Championship rings as the Head Coach of the Seahawks. This perennial power on Long Island has manufactured top talent, rising to best programs across the country. Part of this is a rich lacrosse history, great athletes, a tremendous youth program, but the other part includes tremendous coaching at the varsity level. While the Seahawks made it to the Long Island Championship over the last two years, that’s considered falling short of expectations. With 17 returning Seniors and a history of going all the way in the New York State Championships, Coach Bonn will not let complacency stop him and his Seahawks from falling short in 2020. Hear about Coach Bonn’s journey and what’s next for his Seahawks in a recent interview with the LILJ.

I grew up in Elmont and went to Sewanhaka high school from where I graduated in 1984. I played for the legendary Coach Tom Flatley, who was the coach of the Gold winning 1982 USA team. From Sewanhaka I went on to play at Nassau Community College.  Where in 1986 we won the National Championship, I was voted the game’s MVP, and was selected to the 1st team All-American team. I then went on to attend and play for Hofstra University graduating in 1989. After college I played club lacrosse for 8 years for the North Hempstead Lacrosse club.

Q: Why did you decide to go into coaching?

I decided to go into coaching because of three reasons; the coaches I played for over the years who helped shape me, my oldest brother who is a college football coach, and the fact that I love sports. The coaches who I had the privilege of playing for is unbelievable!  Each of my former lacrosse coaches have been selected to the Long Island and/or National Lacrosse Hall of Fames…Tom Flatley at Sewanhaka HS, Richard Speckman and George Powers at Nassau CC, John Danowski and Rich Donovan at Hofstra University, and Doc Doherty and Doug Dwyer at Garden City HS.

Q: What has been the key in building a powerhouse program at Cold Spring Harbor?

There many key components that have helped us build our program here at Cold Spring Harbor but first and foremost is the fact that we are blessed to coach good, hardworking lacrosse players! Other factors that have helped are that we have a strong feeder program, community and school support, and I personally have had, and currently have, fabulous assistant coaches at all levels.  I truly know how lucky I am to be the head coach at Cold Spring Harbor HS! Another reason why the CSH program has been successful is that we are consistent in our approach to teaching the players.  We preach the little things day in and day out such as defense, ground balls, faceoffs, riding, and time of possession…those aspects are the hallmarks of our program and will never change as long as I am at CSH.

Q: Are there any teams you have coached that stand out more than others?

Obviously, I would have to start with the four NYS championship teams of 2006, 2015, 2016, and 2017. Those teams were able to reach the top of the mountain and call themselves champions!  I would love to see a game be played between the 2006 and 2017 teams!  I am proud to say that each team over my 20 years as the head coach has had success; yes, some more than others but each in their own right were successful.

Year in and year out I have two mottos that I like to preach:

“Do the little things” and “Know your job…Do your job”

Q: What does Cold Spring Harbor have to do in 2020 to get over the hump and go back to the State Championship?

We ALL need to get back that hunger, that desire to be the very best we can be!  And that all starts with me…maybe I got a little content, a little to comfortable.  I promise you that will not happen again in 2020.  This year’s team has 17 returning seniors and almost the entire starting lineup intact which will obviously help us reach our goals both personally and as a team.