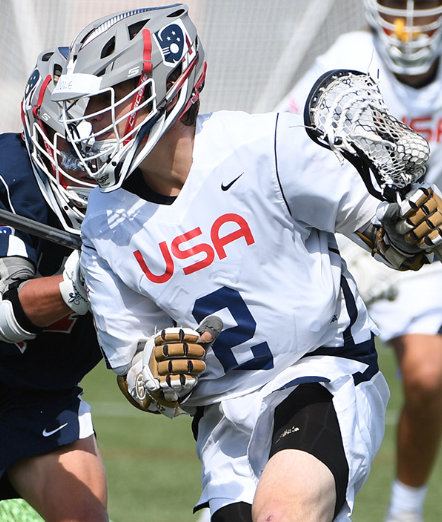 Photo by US Lacrosse Magazine

Following the Spring Premiere in San Antonio earlier this month, Myers and the U.S. team staff narrowed the training roster to 24 players. (According to US Lacrosse Magazine). Included in those 24, are 8 from the island. The U19 team won both of its games in San Antonio, beating Team Premiere 17-3 and Japan 14-2. With over 30% of the roster being from Long Island, it’s evident the USA coaches recognize where top players hail from. Learn about each Long Islander representing the stars and stripes by clicking below.

Michael Alexander is an absolute stud on the defensive side of the ball. Alexander is a 2019 graduate from West Islip High School and is currently playing at Yale University. Alexander is coming off a season that earned him defenseman of the year and also was a two-time All-County player at West Islip and Mr. defense in 2018-19. Alexander was arguably the best defender to come out of Long Island in quite some time and will be bringing his defensive skill set to Team USA U19 this summer.

Face-off specialist Conor Calderon is going to have the edge more times than not at the X. Calderone is a graduate of Smithtown West and won 93 percent of his face-offs in his senior season! Calderone is currently playing lacrosse at the University of Maryland and as a selection to the Team USA U19 team, he is looking to continue his outstanding face-off percentage for the red, white, and blue.

Liam Entenmann is one of the best in the business in goal. Entenmann, a Chaminade graduate in 2019 was rated as the No. 1 goalie by inside lacrosse in 2019l. Entenmann is currently playing at Notre Dame University and is now bringing his elite goalie skills to the Team USA U19 team.

Patrick Kavanagh is an explosive athlete that can get to the goal any time he wants. Kavanagh is currently playing lacrosse at Notre Dame University and brings elite scoring to the table. In 2019 Kavanagh was rated as the No. 26 lacrosse player by Inside Lacrosse and was selected to the Under-Armour All-America Long Island team in 2017 and 2018.

Midfielder Jack Monfort is a complete player who can rack up a heavy number of goals and assists. Monfort, a graduate of Syosset High School is playing lacrosse at Yale University. Monfort will rep the USA team after his freshman year at Yale.

Jake Naso is one of the best face-off specialists to come out of Long Island in 2020. Naso is currently playing at St. Anthony’s and is committed to play lacrosse at Duke University after high school. Naso won 151 of 199 face offs last season and is looking to continue that trend this season for St. Anthony’s as well as in the future both for Duke and Team USA U19.

Brennan O’Neill is nothing short of spectacular on offense. The senior attacker is in his final season at St. Anthony’s High School and is going to continue his lacrosse career at Duke University. Last season O’Neill racked up 39 goals and 11 assists and was the No. 1 player in his class as well as the Long Island Player Of The Year. As a selection to the Team USA U19 squad, O’Neill will be another huge threat on offensively and will have no problems doing everything else in the job description.

Goalie Jared Paquette makes it very difficult for opposing teams to score goals. Paquette had a save percentage of 71 percent in his final season at West Islip High School and is now in his first year at Yale University. As a selection to the Team USA U19 team, he will continue to wreak havoc for teams looking to put up a lot of points.