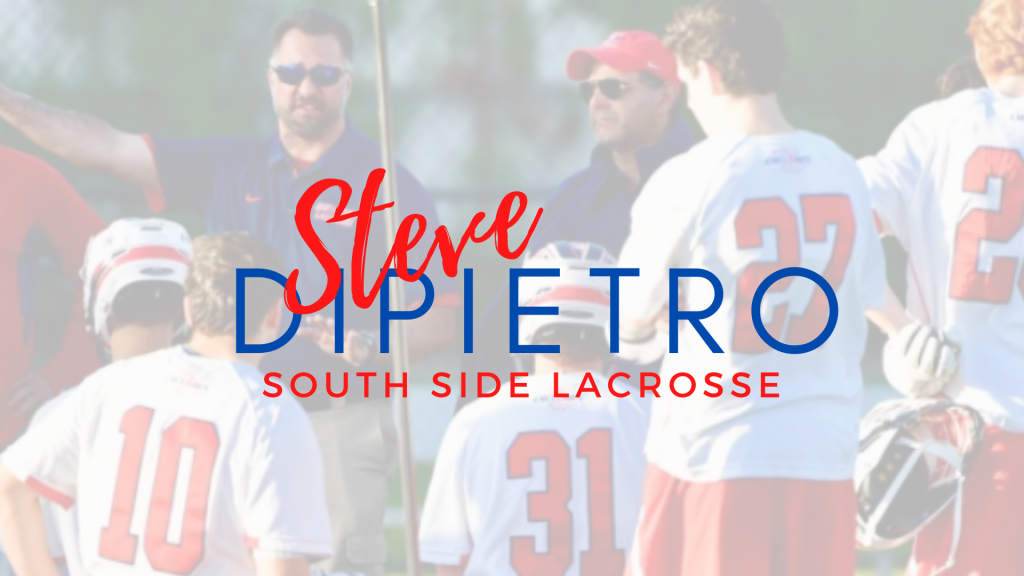 South Side’s success is nothing out of the ordinary. In fact, Head Coach Steve DiPietro has carried this success over his 20 years of coaching. Since his debut in 1998, he has been praised for his work along side with the likes of Brian Spallina and Steve Mutz. His passion for the game is shown on the field. With the help of a stellar lacrosse program, South Side has appeared in five straight Final Fours. And with the help of a stacked 2020 roster, Coach DiPietro is confident that the team can surely add one more. In his interview with LILJ, he emphasizes the team’s work ethic and clear ability to win. Read below for the full interview.

Q: How did you start coaching for South Side?

A: I started coaching at South Side back in 1998 as the Head Middle School Coach.  I coached the middle school team for 3 seasons going 24-1 in 98, 99 and 2000.  In 1999, I did double duty as the Head MS Coach and then would go work with the Varsity as well under Coach Steve Mutz.  In 2000, Joe Baccarella became the Head Varsity Coach and I continued that season as the offensive coordinator for the Varsity finishing up my career at the Middle school level.  I was Joe’s assistant from 2000 through the 2007 season along with Brian Spallina, two guys I learned a lot from.  I took over as the Head Coach for the 2008 season and have been in that role since.

I have been blessed to have worked with a lot of very talented and caring coaches, players, parents, and community members that have all had a hand in the success we have had over the years from the PAL all the way through the Varsity level.  Having Dan Ferrick as our JV Coach as well as a teacher in the building helps keep a solid foundation and consistency for our players.  Getting to work with great assistant coaches on the Varsity level from John Gorman, Mike Bryant, Mike Skudin, Pete Gibbons, Steve Serling, Mike Lucchesi, Chris Passuello, and now lucky enough to have been working with Tom Martello, Carl Iacona, and Connor Horl have always given our kids some great mentors and leaders to learn from as well as continuing to help me on my evolving and growth as a Head Coach.

Q: Your team went 12-5 in 2019 and went 6-2 in conference play. How does your team keep up production and even improve in the new season?

A: We have been to 5 straight Final Fours and have 18 seniors this year that have been through all the battles.  We have an experienced and deep group.  Probably the deepest team since that 2008 group that made it to the Nassau County Finals.  We have excellent leadership and had some young players get some valuable experience last season.  There are no shortcuts in our conference.  Beating Manhasset and Garden City, that are always 2 of the best teams in the country, you have to bring your best and limit your mistakes just to get out of our county.

Q: What are some of your key coaching philosophies?

A: We always talk about the process and the journey.  If we do the right things on and off the field, then we will have an opportunity to do something special at the end of the season.  We always have scheduled a difficult non-league schedule with the likes of Cold Spring Harbor, Syosset, Northport, Port Washington and this year had Massapequa and Farmingdale as well.  Iron sharpens iron.  Those are all great teams that are well-coached and really give us a great idea how close or far we are from where we need to be in May to try and win a championship.  We don’t try and just rack up wins, we try and expose where we are lacking in order to use the rest of the season to address those areas to put us in the best position to be successful.  As a teacher in the High School and being involved with the RVC Future Program from grades 3-7, we try to build a great relationship with the kids and families stressing both on the field and off the field expectations and learning experiences so when they leave us, they will hopefully have the tools as young men to make good decisions that will help them for the rest of their lives.

Q: South Side graduated some key contributors in 2019. Who do you expect to step up for the team in their place?

A: We did lose some excellent leaders and players in 2019 for sure.  We were very young last year as evidenced by our 18 seniors this year and the underclassmen we had playing important roles for us last year.  We have returners all over the field.  On defense, Nick LiCalzi (Navy) leads the way as a 2x All Long Island and 2x All-American and Nassau County LSM of the year.  He is a very special player and when your best guy is your best guy everyone else can’t make excuses.  He never takes a rep off and always leads by example.  He will go down as one of the best players in South Side history.  Jack McDonald (Maryland) and TJ McNicholas (Albany) are returners and award winners that will hold us down on that end of the field with their athleticism and stick skills.  Eamon McGowan and Matt Lozito will round out the defensive unit.  Ezavier Brewster (Cortland- football/lacrosse) returns as SS D-Mid of the conference last year. At the midfield, Tim Mann, Thomas Kelly (Binghamton), Griffin O’Shea, and Brady West lead the way with others like Matt Melkonian and Luca Arongino fighting their way onto the field this year.  Controlling face-offs we have our 2 seniors, Aidan Kelly (Lafayette ) and Richie Petrone that both won 60% last season back with a lot of experience.  On attack we have both William Pickett(Cortland- football/lacrosse) and TJ Sheehan (Denver) as our leading scorers and starters with John Jude Considine and Chris Bochilo filling out our attack unit.

Q: How does it feel that the 2020 season could be in jeopardy and what does it mean for the team?

A: I would be devastated for our seniors and our team.  We all fully understand there are bigger things than sports with everything going on in the world, but it is heartbreaking for the amount of time, work and energy that this team has been building towards for this season.  Personally, I have known and worked with these players for a long time and developed a very close relationship with them so the thought of not being able to see them out on the field would be something very disappointing to go through.  We are keeping our fingers crossed that things will get better and we will possibly be able to have some kind of shortened season.  Our thoughts and prayers obviously go to everyone that is being affected by this global pandemic.

Q: What are you looking forward to most in the new season?

A: Everything.  We have high expectations and hoping we get to give it our best to reach them.  We are looking forward to that process of laughs with the players, the adversity along the way and the pride of getting this group of young men to hopefully achieve all the goals they have as a collective group and in that process teaching them lessons that they can take with them in all aspects of their life when they leave us.