Then and Now; Pat McCabe 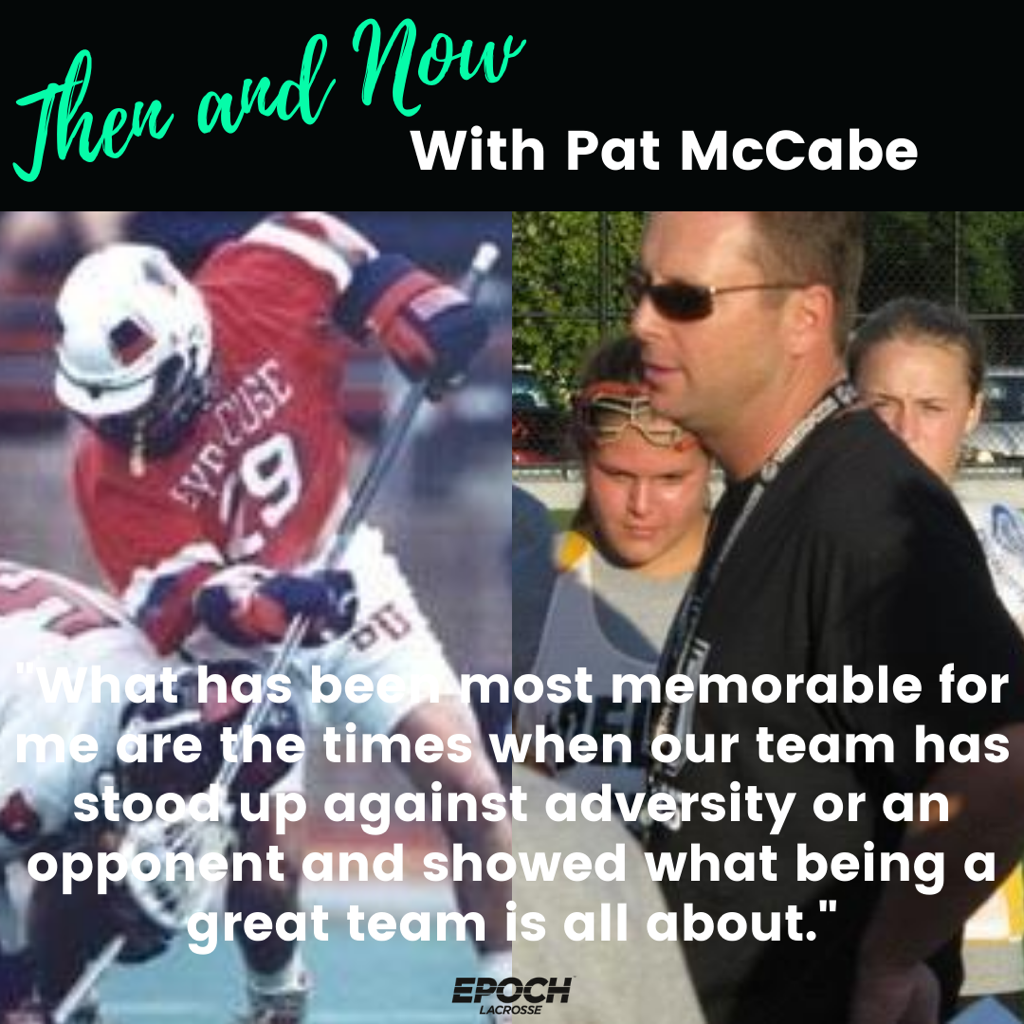 Lacrosse wasn’t the first sport that Pat McCabe grew up playing. As a baseball player for much of his childhood, he didn’t start playing lacrosse until the eighth or ninth grade. He was able to see the lacrosse field from across the diamond, and always thought it looked like fun. It took some convincing from his friends to get him to play, but once he did, he never looked back. Throughout the various levels and teams that he played for, McCabe was a winner everywhere he went.

McCabe was a star defenseman at Elmont High School where he was part of a team that won the New York State Championship. While playing for Elmont McCabe considered those years to be the highlight of his lacrosse career.

“Our Elmont team was a special group that had been preparing for the opportunity since the 10th grade.  We had a tremendous senior class and some talented underclassmen.  At that point I considered HS lacrosse to be the highlight of my career.”

After Graduating from Elmont in 1987, McCabe continued playing in college at Syracuse University. Not knowing what to expect when he got their, he ended up being a part of three Division I National Championship teams. While winning the championships were special for McCabe, he believes that those Syracuse teams also changed the game and made young people want to play.

“Our Syracuse teams were special and in many ways changed the game.  Yes, we won championships but we did it in a way that left people entertained and made an impression.  I like to think those teams made a lot of young people want to be lacrosse players.”

Playing lacrosse at the professional level wasn’t something that McCabe gave much thought but certainly had the talent to do so. All he cared about was playing against the best competition that he could find. That competition was in the USCLA where he says that was the best lacrosse that he had ever played.

“This was the best lacrosse on the planet and I’d put those top club teams against anything you see today.  The players I played with and against in those days were some of the smartest guys I’ve ever seen on a field and all they cared about was winning games.”

McCabe went on to play professionally for the New York Saints and the Long Island Lizards where he won two championships in 2001 and 2003. What made playing for the Lizards special was that many of the teammates he played with were part of the LI Hofstra Club Lacrosse team.

“We were able to set the culture and bring on some really talented guys who bought into our style and added their own dimension.  The friendships I made in those years are special and having the chance to play with some younger guys that I admired as players but never really knew was great.”

McCabe’s love for working with young players drew him into coaching. He was given the opportunity to coach at C.W. Post as the defensive coordinator for the men’s lacrosse team from 1999-2001. Tom Postel gave him this opportunity and says he learned a lot from him.

“I learned a lot from Tom about how to understand players and he was a master of figuring out how to put the right pieces in the right places.  That’s probably where it started for me.”

After being named the head coach of Adelphi’s women’s lacrosse team in 2014, he has won three Northeast-10 Championships, three NCAA National Championships, and has appeared in the NCAA Tournament five times. With everything that McCabe has accomplished, it’s how his team handles adversity that he says is most memorable.

“What has been most memorable for me are the times when our team has stood up against adversity or an opponent and showed what being a great team is all about.  It’s easy to be a good teammate and stick to the plan when things are going well, but how you act or react during the difficult times is a true measure of who a person or a player really is.”

Coaching gives McCabe a slightly different view of the game then when he played, but was able to learn from a lot of smart people who taught him the importance of learning every position on the field and the responsibilities that they have. McCabe says that not being able to go on the field and make a play is the most difficult thing about being a coach.

“The hardest part of being a coach is that you can’t go out there and make a play, you have to trust that your team is prepared.  It’s very satisfying when our girls come through and rely on their preparation to get them through a tough in game situation.”

In addition to being at the helm of Adelphi’s women’s lacrosse team, McCabe is the founder of the Shooting Star Lacrosse Camp which has been operating since 1999. What is satisfying for him about working with young players is seeing them develop and being able to master something that was once foreign to them. He takes pride in coaching views sports as a way to build up confidence and self esteem.

“Coaching is about seeing the potential in someone that they may not see in themselves. If you can build a young person’s confidence on the field, they will be more confident off the field and that’s what it’s all about. Sports can be the ultimate self esteem builder and it is nice when you see a young person walk a little taller and hold their head up high because playing a game has made them feel good about themselves.”