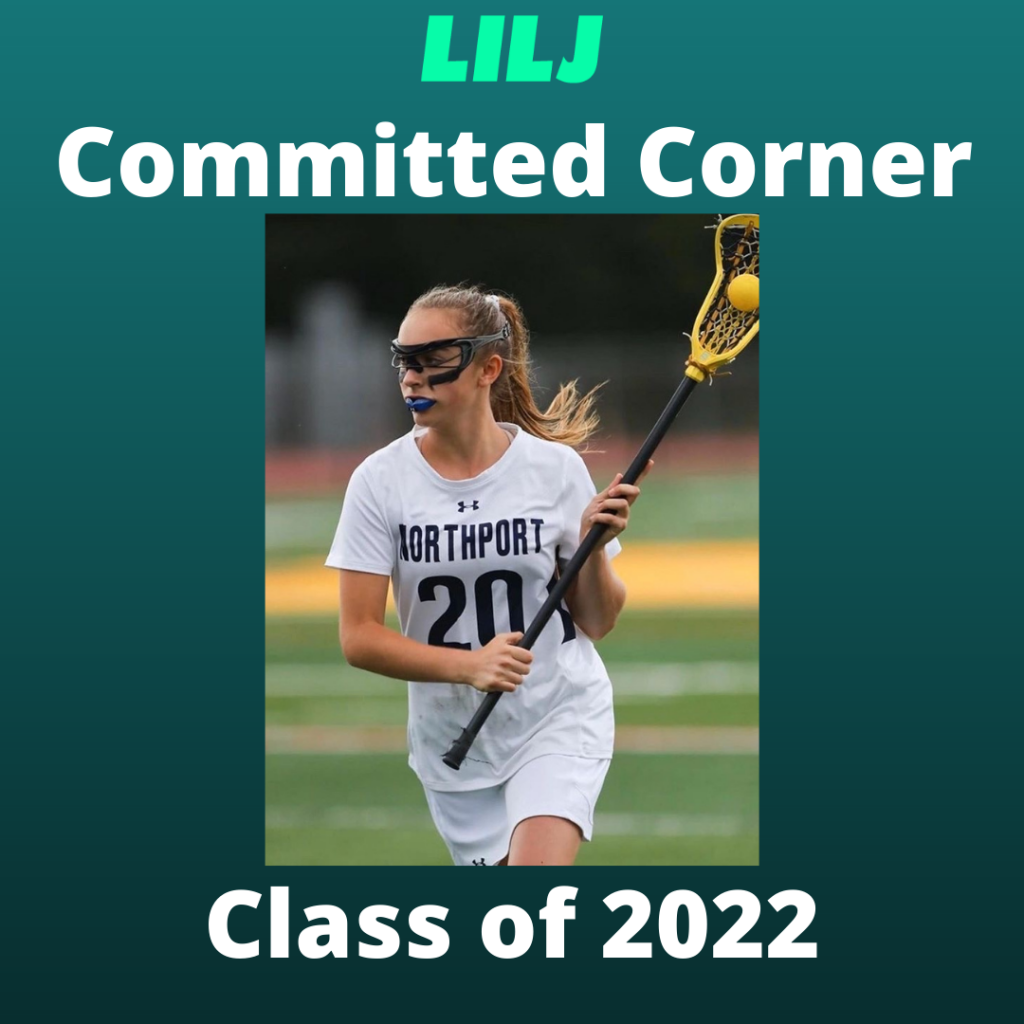 Francisco Cortes (2022, Midfield, SWR)- Harvard: Cortes is an all-around stud on the field. He has an incredible grasp of the game and demonstrates a unique athletic ability. This includes a lethal combination of speed, agility, and timing with is matched by his laser of a shot. He will be an asset to a Shoreham Wading River squad that is in need of an offensive scoring threat. The Harvard commit looks to get it done in 2021.

Dan Eagers (2022, Defense, Northport)- Delaware: Northport’s Eagers is an absolute unit. The junior never shies away from hard contact and if often the relentless defensive force his team needs. He has surprising speed for a defender, which he utilizes in locking down opposing offenses and moving the play downfield. The recent Delaware commit is on course to have his best year with the team.

Brady West (2022, Midfield, South Side)- Loyola: West is set to explode on offense this season. The nifty midfield threat is going into this season with a gaping hole in this year’s attack team. In 2019, the junior earned himself 10 goals and five assists on a stacked South Side team. Now, it appears that the field is his. Look for the recent Loyola commit to have a stellar season in the new year.

Curren Johnsen (2022, Midfield, Bellport)- Lehigh: Curren Johnson will be the midfield anchor that Bellport needs this season. The current junior had a fantastic run in 2019, scoring 15 goals and 10 assists on the year. He also steps into a key leadership role for his squad this year. With significant strength and a fantastic lacrosse IQ, it would surprise no one to see the Lehigh commit have an even better 2021.

Tyler Martini (2022, Attack, Wantagh)- Binghamton: Martini will lead Wantagh’s attack team this year. The recent Binghamton commit is set to have a field day following the departure of many of the team’s offensive threats. In 2019, the junior had an impressive 17 goals and 5 assists on the year. The hardnosed attackman is a threat to any opposing defense and is known to be a crafty scorer. He’s one to watch next season.

Gavin Jacobsen (2022, Midfield, Port Washington)- Binghamton: Recent Binghamton commit Jacobsen is simply a stellar player. The offensive-minded midfielder can make it look easy using a combination of agility and unique lacrosse IQ. He is a great scorer who has the ability to glide through opposing defenses. All signs point to Jacobsen having his best and most important year yet.

Aaron Cho (2022, Attack, Herricks)- Boston University: Herricks is lucky to have a player like Cho. He had more than an incredible season in 2019. The attackman earned himself a massive 73 points which included 40 goals. He is more than just a scorer, though. Cho put on a passing clinic with 33 assists during the year. With a keen sense for all things offense, the Boston University commit will more than likely have an even better 2021.

Hunter Panzik (2022, Midfield, Manhasset)- Air Force: Hunter Panzik is Manhasset’s best-kept secret. The junior has some of the best footwork on the island and demonstrates incredible poise on the offensive end. His agility is matched by his ability to score from close range. This year, the player should be seeing a significant role within the team’s dynamic. The recent Air Force commit is an exciting one to watch.

Jameson Smith (2022, Midfield, Bayport)- Johns Hopkins: Smith creates the perfect storm of offensive grit and impeccable lacrosse IQ. The recent John Hopkins commit was an essential part of Bayport Blue Point’s 2019 roster, where he scored 31 goals and a contributed 15 assists. His ability to control the game will make him an asset once again in 2021.

Danny Fitzgerald (2022, Defense/LSM, Mepham)- Mercy: Fitzgerald is a lockdown defender for Mepham. He will play a much larger role in the team’s dynamic and defensive play in 2021. He has significant speed for a defender while also making his mark as the team’s LSM. The junior has the hard-nosed mentality needed to scare opposing offenses, which will prove well when he attends Mercy College.

Charles Balsamo (2022, Attack, Chaminade)- Duke: Chaminade’s Balsamo is a nightmare for opposing defenses. The attackman is one of the best in his class, combining his impressive stick skills with incredible agility and a cannon of a shot. Never shy of making a game-deciding play, he remains poised under adversity. It is without question that the recent Duke commit is set to have his best season yet in 2021.

Brendan Staub (2022, Defense, Garden City)- Cornell: Cornell commit Brendan Staub is a tank on defense. He has an overwhelming presence that is characterized best by distinct strength and aggressive on-field mentality. The hard-nosed junior is great on the transition and invites gritty play. He will be an asset not only to his Garden City team but in his tenure with Cornell Lacrosse in 2023.

Kimberly Greenblatt (2022, Midfield, Massapequa)- Rutgers: Greenblatt is a source for all things offense. The Massapequa junior is simply a talent on the fast break, known for the surprising speed and keen footwork. She has a quick release which proves to be lethal to opposing defenses. Look for the recent Rutgers commit to step into a larger leadership role and making it happen in 2021.

Ella Cabrera (2022, Midfield, Northport)- UNC: Recent UNC commit Ella Cabrera is an exciting midfield threat with impressive agility. Her ability to move the game downfield is amplified by her surprising speed and movement through traffic. She will join a Northport squad that has been absolutely incredible during Coach Rose’s tenure and will surely be an asset to an already talented offensive unit.

Tanner Scarola (2022, Midfield, St. Anthony’s)- Army: Scarola is a talent for St. Anthony’s roster. The midfielder has an impeccable lacrosse IQ and impressive footwork to match. She does it all on offense but has the tendency to make a key pass leading to the score. Look for her agility to be a definite plus for her this coming season, as the recent Army commit will be doing all over the field in 2021.

Kaylie Mackiewicz (2022, Attack, Northport)- Duke: Recent Duke commit Mackiewicz is one of the best scorers on Long Island. Her role on Northport’s attack team will only get bigger in 2021. Two seasons ago, the junior already put on a clinic with 45 goals and 14 assists. With significant speed and a knack for all things offense, it should be no surprise to see Mackiewicz doing more of the same during the new season.

Emily Scorcia (2022, Defense, Bay Shore)- Loyola: Bay Shore’s Scorcia is a lockdown defender with a hard-nosed lacrosse mindset. The junior earned herself an impressive stat sheet in 2019, winning 26 ground balls while showing off her surprising offensive capability. Following the team’s departures, the Loyola commit will be one of her team’s key defensive leaders and will look to hold it down in 2021.

Jessica Lampasone (2022, Defense, Kellenberg)- Towson: Kellenberg is lethal with the addition of Lampasone. She is an intimidating presence on defense, often barrelling toward the ball to regain possession. Incredibly fast for a defender, the junior has the ability to bring the game all the way downfield and make the accurate pass. She will be an asset to Towson and her team this upcoming year.

Emily Iacobellis (2022, Midfield, South Side)- Cornell: Emily Iacobellis is a scoring machine. On a roster packed with offensive threats, the South Side midfielder put together an impressive campaign with 24 goals and 6 assists. Her speed helps her tremendously in moving around defenders for the open shot, a trend that will most likely continue in 2021.

Courtney Quinn (2022, Midfield, Ward Melville)- Stony Brook: Recent Stony Brook commit Quinn is a dominating force on offense. She uses her strength and distinct lacrosse IQ to control the pace of the game. With a quick first step, the Ward Melville junior seems to glide past defenders, creating the open shot or converting the assists. Look for her to do more of the same.

Jessica Peluso (2022, Midfield, East Islip)- Colorado: East Islip’s Peluso does a wonderful job in the midfield. The junior uses a distinct combination of scoring and passing skills to enhance the team’s offensive production. She was a threat in 2019, scoring 15 goals on a crowded roster. With a great sense for the game, the Colorado commit looks to finally break the doors down come the new season.

Olivia Marlow (2022, Defense, Massapequa)- UConn: Marlow’s agility is what makes her a stand out player for Massapequa. Besides doing a stellar job on locking down in key moments, the hard-nosed defender often brings the ball down-field with a great amount of speed and footwork. Expect her to make the key pass when needed. She will certainly look to have her best season yet with the team.

Delilah Mile (2022, Defense, Mount Sinai)– Albany: Mount Sinai’s Mile will be a threat for her team in 2021. Her presence on defense would give any attacker a difficult time. She possesses great strength and vision when intercepting the pass. Mile has a great sense of the pace of the game and is expected to have a greater leadership role with the team this season. She’s on track to have another great campaign.