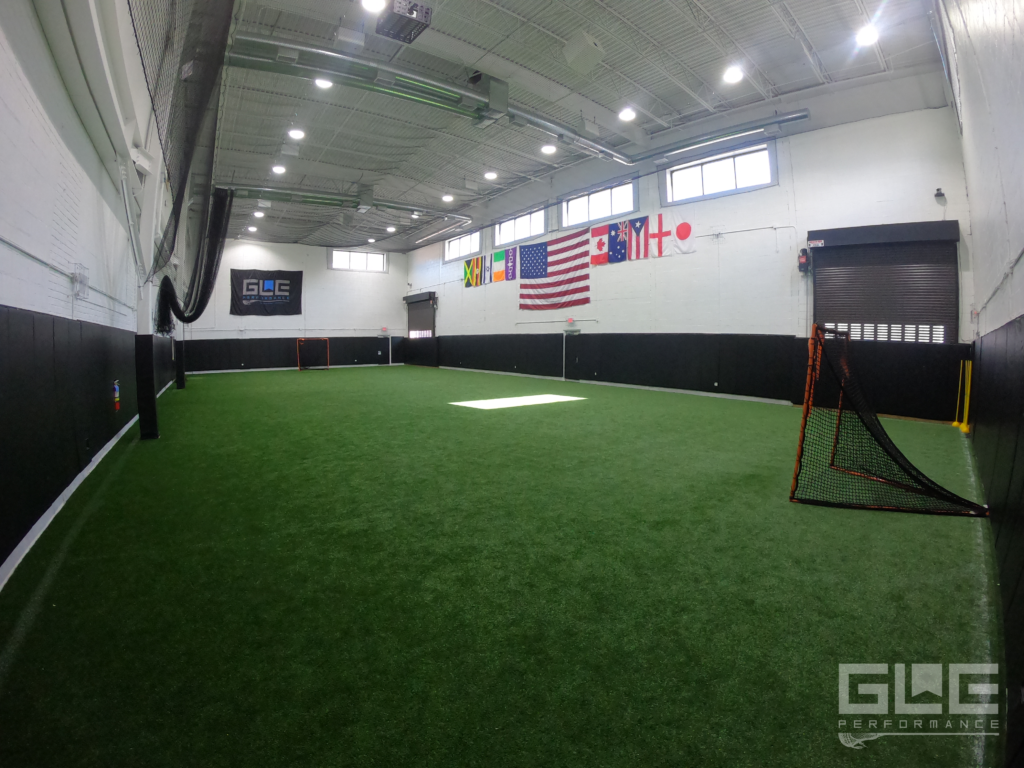 On an island where lacrosse is a way of life, a space has come onto the scene that was designed for that very culture. Built for lacrosse players, by lacrosse players, Goal Line Extended Performance is a brand new indoor, lacrosse specific training complex designed with all the bells and whistles, while maintaining the structure and programming to push lacrosse players towards the best versions of themselves.

Founded by Ithaca College graduates and lacrosse alums, Cody Swing and Ryan Dance, GLE can be described as a playground for the lacrosse community. This play space includes just that, a place to play the game, as well as a place for athletes to undergo thoughtful training programs to their own specifications which guide athletes to get bigger, faster, and stronger.

Currently, GLE is running a slew of programming for boys and girls lacrosse players youth thru High School that gives the lacrosse community a chance to get better during what’s been a very difficult 2020. For more information on signing-up, click here. The highlight of so many kid’s days are walking through the sliding glass doors of this lacrosse lovers haven, to enter a world where they can simply grow in a sport they love, amidst others celebrating and working to achieve greatness in what is the creator’s game.

Being post-collegiate lacrosse lovers themselves, Cody and Ryan decided to use Monday nights in November to give back to the ‘washed-up’ by running the inaugural GLE Adult League. Drawing young adults aspiring to prep for their HS seasons to insurance brokers who are still willing to put a stick in their hand for a few hours, the Adult League has displayed tremendous success thus far. Two weeks in, the league promotes fast paced play, a shared sense of camaraderie, Monday Night Football projected throughout the facility, and even celebrity appearances by Long Island’s very own, Kylie Ohlmiller.

When taking with Kylie about why she plays in the league, she said, “I’m a big fan of what GLE Performance does for the lacrosse community in Long Island because they provide a ton of unique experiences, this adult league being one of them.” Ohlmiller added, “Unfortunately there aren’t a ton – if any – opportunities to get real time game reps after high school, for players at any level. So for someone like me who’s trying to train on her own to play professionally – a co-Ed fast paced fun but competitive league where I can get some game scenario touches that I wouldn’t see otherwise is a no-brainer for me!”

Ohlmiller is currently training to make the USA Women’s team final roster. The US women are set to compete in the summer of 2021. Her involvement in GLE’s Adult League left goalies digging balls frequently out of the net, defenders spinning, and the scoreboard ringing.

A co-ed league where girls and guys alike can mix it up and just play, shows how GLE is inclusive,  welcoming, and all about the game.

After Team Amp took home the ship in week 2, it remains to be seen who will reign champ in the final Adult League session next Monday night, November 16th. A special shout out to Amp founder Alex Perreault, and his three HS ringers – Marcus Wertheim (Smithtown East, Brown Commit) James Laudenslager (Chaminade, Middlebury) Anthony Koehler (Chaminade, Brown) – who helped Team Amp finish night 2 undefeated. After winning a shootout thriller in semi-finals, the fellas at AMP most certainly deserve some recognition on the LILJ.

Since GLE’s inception, the Adult League has been something Cody and Ryan have wanted to do. After talking to Co-Founder Cody Swing about why they decided to move ahead with the idea this November he said, “We wanted to bring the Long Island lacrosse community together in a competitive and fun environment. The structure is simple, highly skilled movements with minimal contact, similar to pick up basketball. Our league has high school seniors playing against college athletes who are also competitions against weekend warriors.  The energy and level of competition are what excited us most and we’re excited to continue to see how the league grows over the next couple of months.“