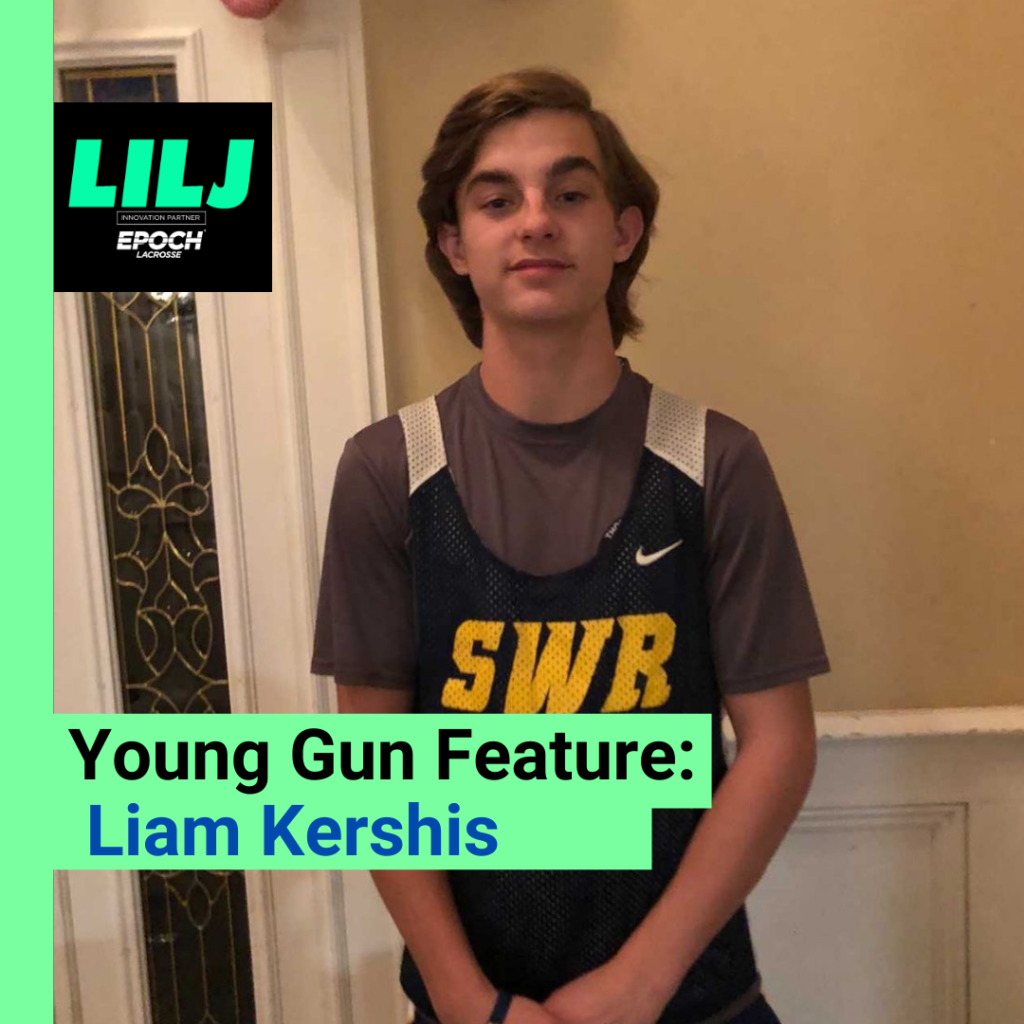 Shoreham Wading River has a lot of young up-and-coming talent that is poised to help the team be a Suffolk County powerhouse once again in 2021. One of those young players is freshman attacker Liam Kershis. He is a two sport athlete, excelling in both football and lacrosse and is looking to make an impact for the Wildcats in 2021. This will be his first season playing on the varsity level where he will get to learn and play alongside some of the most elite players on Long Island. In 2019 the Wildcats had a season for the ages, winning both the Long Island and state championship. With the 2020 season being canceled, 2021 will be their first opportunity to run it back and remain the team to beat. Liam Kershis recently spoke with the LILJ about his thoughts on the upcoming season, and his desire to be a collegiate athlete. Read more about him down below in this Young Gun Feature!

Q. How did you begin playing lacrosse?

A. It’s actually a funny story.  My dad was a Division 1 baseball player for Towson University. My mom played girls club lacrosse at Walt Whitman HS. My dad wanted my brother Alex and I to play baseball and my mom wanted us to be introduced to lacrosse as well. We played both for a while starting in kindergarten but since it is in the same sport season, we had to make a choice.  My brother and I picked lacrosse and that’s how we started playing.

Q. As a multi sport athlete, are there any similarities in the preparation that you put in for a football game and a lacrosse game?

A. There are definitely similarities in how I prepare for football and lacrosse games. One major and important similarity is footwork. Footwork is extremely important because it allows you to create space from the opponent guarding you.  In lacrosse, having fast footwork allows you to beat your defender causing the defense to slide and hopefully create offense to score.  Same thing in football, “juking” your defender for a far run can set up a potential touchdown. Quick feet is needed for effective juking.

Q. Do you envision yourself playing sports in college whether it’s football or lacrosse?

A. Yes, definitely!! I would be honored and thrilled to play either or both in college.

Q. SWR has one of the strongest programs on Long Island. What does it mean to you to get to play for such a storied program?

A. It actually means a lot.  SWR has a long history of success.  For years I have been watching Chris Gray, Kevin Cutinella, Xavier Arline, the Schwarz Twins and Jake Wilson play on SWR’s Varsity team.  Watching them has made me want to play for SWR and follow in their footsteps. Now I have the opportunity to play along side of some of these players and it will only motivate me to become an all around better athlete.  SWR’s lacrosse program also affords me to be coached by an incredible coaching staff, led by Coach Mike Taylor. Coach Mike Taylor and his staff I know can guide SWR to another successful season as they did in 2019.

Q. As you head into your freshman season, are there any goals that you’ve set for yourself that you would like to accomplish?

A. The goals I have set for myself is to develop into the best player I can be by learning from my teammates and coaches.  It is also important for me to be a leader/role model on and off the field.  And of course, I want to win a state championship.

Q. What is your confidence level in SWR’s team heading into the 2021 season?

A. SWR is filled with raw talent inside and out.  We have a large amount of seniors that are D1 commits and a hungry group of underclass men.  We have amazing coaches that can help lead our team to success.  There is nothing stopping SWR from going all the way in 2021.