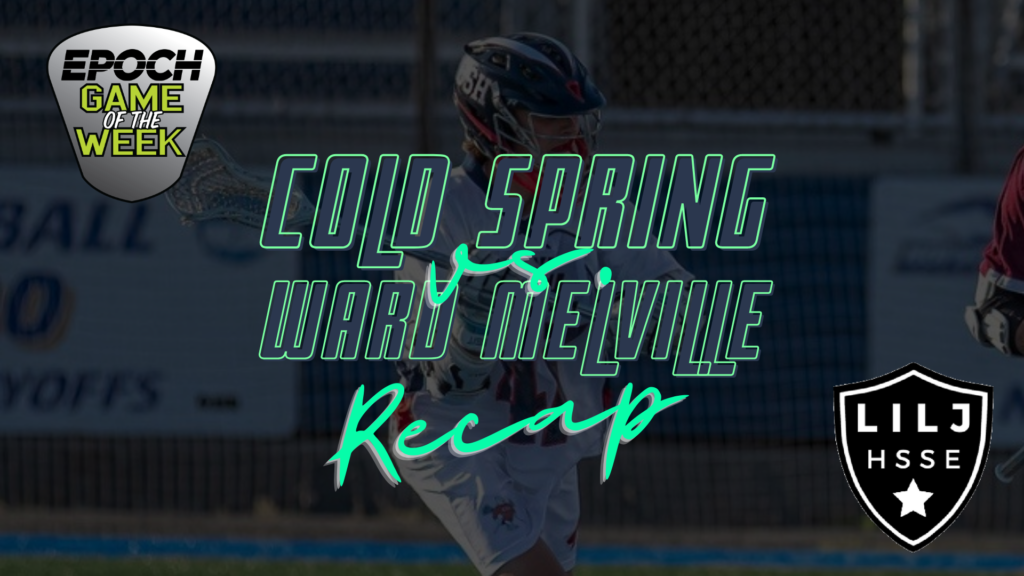 It was our first boys Epoch Game of the Week for the LILJ High School Spring Experience, and it was a dogfight from start to finish. The Cold Spring Harbor Seahawks were victorious in the end, topping the Ward Melville Patriots by a final score of 13-5.

The game started off close as each team exchanged goals before Cold Spring Harbor took off for four straight, assuming a lead they would never lose. Every time the Pats would score, the Seahawks answered with another three.

Leading the Seahawks was Face-off specialist Max Hawkinson (Rutgers Commit), who scored an absurd five goals on the day with four coming on near back to back plays. He was unstoppable, pulling out all the moves against a young Patriots defense en route to one of our two Epoch Players of the Game.

Beside Hawkinson, the Seahawks saw great production from both goalies in Spencer Will (Junior) and Carson Kirchner (Sophomore).  Per usual, the Seahawks saw stellar play from Senior Amherst Commit, Ben Bruno, who does it all for the Seahawks. One of the highlights of the game was when Junior Garrett Geraci stuck a bar down jump shot to extend the Seahawks lead in the second half. CJ Reilly (Sophomore) had himself a day, netting a hat-rick against the Pats. The defense held it down behind Junior Division I commits in Patrick Pisano (Dartmouth) and Jesse Phelan (Lehigh).

The other Epoch Player of the Game went to Patriots attackman Nico Barbero, who led a young Ward Melville team littered with freshman and sophomores, against a veteran-heavy Seahawks team.

“Overall, we played really well as a team,” Barbero said. “We have a bunch of freshman on our team. We’re really younger, and nobody plays scared and everybody plays hard.”

This young Ward Melville team put up a great fight against the Seahawks all game. Working in three young goal keepers, the Patriots had one ☝️ goalie in particular stand-out in Charlie Giachetti (Sophomore) who was 50% saving the ball against a very skilled Seahawks group. Between the lines, Madden Murphy (FOGO), Nick Gaffney (Middie), and Dan Cosentino (LSM) really stood out for the Patriots. These guys battled against older, more physical midfielders all game long. On the offensive, The Patirots have a goat in the making in Nick Brucker, who scored two pretty goals on just two shots.

Overall, it was a rough-and-tough, hard fought matchup that certainly lived up to the Epoch Game billing! The Seahawks will take on Commack (0-1) this Sunday and the Patriots will face-off against Calhoun (0-1).

Tune into all the action this Sunday by clicking the link below, which will bring you to our LILJ Vimeo channel.