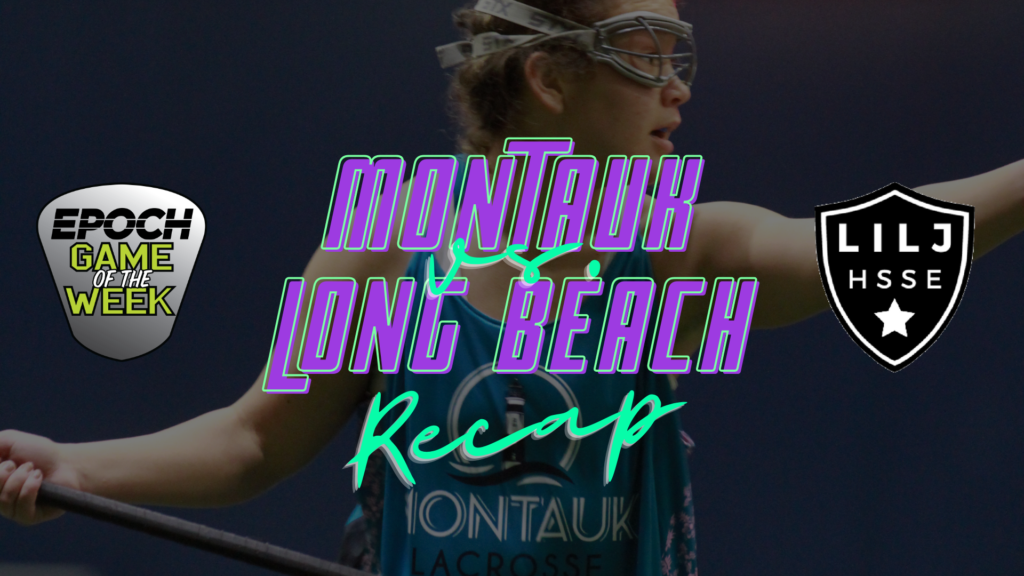 Welcome to the first girls Epoch Game of the Week recap of the new LILJ High School Spring Experience. We are going to take a look at the fan voted Epoch game of the week between Long Beach and Montauk.

Long Beach jumped out to a one goal lead when Delaney Radin (Super Soph) found Alexis Morton (Richmond Commit) for the goal. Radin and Morton both dominated in our winter box league. As a sophomore, Radin led the league in goals and points while Morton won the championship MVP with her Manhasset Indians. Now, Morton and Radin are teammates and will be one of the most dangerous duos in this league.

Another dangerous duo that showed out on Sunday was Grace Gately (Villanova Commit) and Emma LoPinto (Florida Commit) for Montauk. Gately assisted to LoPinto for Montauk’s first two goals of the game giving them a 2-1 advantage. Morton quickly answered by driving through Montauk’s defense for her second goal.

Both teams traded goals for the first half and neither team had more than a one goal lead. Maureen Duffy came right back and scored for Montauk regaining the lead. On the next possession, Leah Chasin ran through the X to find Radin on the left side of the cage for the quick goal.

Normally in a game, Gately would look to score at will, but for this game she found herself being the team facilitator. She found Ashley Newman (Yale Commit) for an easy goal right in front of the cage. Gately finished the game with four assists all of which came from the X position.

But, Long Beach wouldn’t go away in the first half. Morton came back and found an opening on the left side to rip a shot in for the goal. Once again, the game was tied.

Montauk came out of halftime ready to take control of this game. LoPinto assisted to Meghan McLaughlin (Army Commit) for the first two goals. Then, Mackenzie Beil (Pitt Commit) found McLaughlin for her third goal in five minutes.

To open the second half, Montauk scored the first six goals which effectively sealed the game. Long Beach could not recover from a six goal deficit.

“We met in the beginning to talk strategy,” Epoch player of the game for Montauk Emma LoPinto said about how her team is a mix of free agent players. “We played better together towards the end.”

Alexis Morton was named the Epoch player of the game for Long Beach after scoring five goals and scooping three ground balls. After the game, she was just happy to be back out on a turf field playing lacrosse.

She said that her team needs to work together and “capitalize on the clears” to improve for their next game.

Long Beach has the offensive talent to beat any team in this league, so I expect them to use this game as motivation to play better and hopefully beat Montauk if they play them again.

Also, be sure to vote for next week’s Epoch Game of the Week by following our instagram account @LiLaxJournal

You can even watch all the games from Week 1 by clicking the link below!