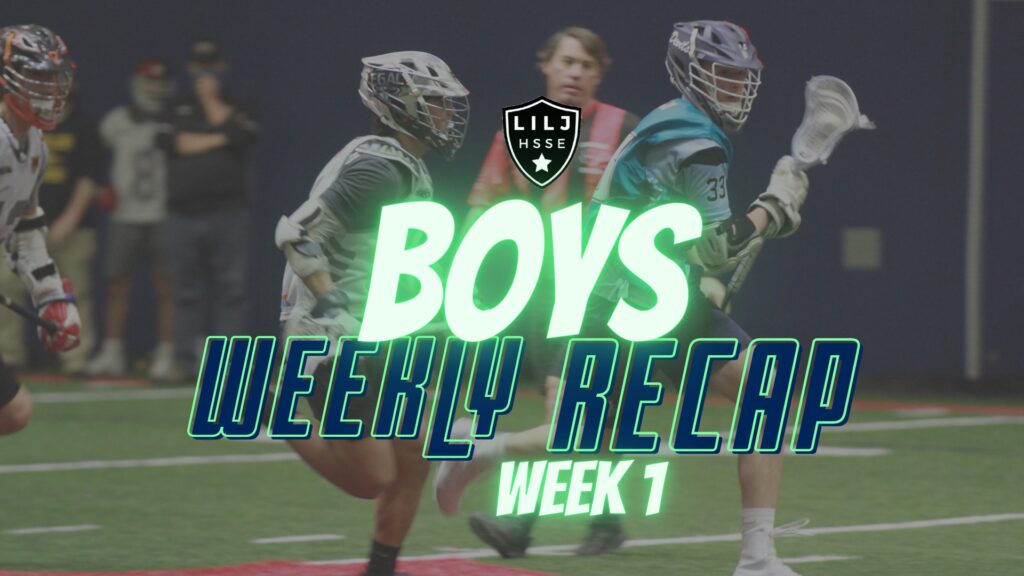 Welcome to the first LILJ Boys High School Spring Experience recap. We watched five more incredible games of lacrosse on Sunday evening and we are going to give you the quick recaps of each game. If you want to watch the full games, click this link for the streams.

To kick off the first week for our HSSE season, Montauk Green faced off  against Commack. Montauk Green is a free agent team which means it is a mix of players from different school that couldn’t participate in the HSSE. Gavin Jacobsen scored Montauk’s first goal after whipping the ball into the back of the net.

Montauk scored the first four goals of the game which turned out to be the deciding factor the rest of the game. Ryan Smith for Commack broke the seal by scoring off of a bounce shot with just six minutes left in the first half. The first half ended the same way it started, with Jacobsen sniping the top left corner. Montauk Green led Commack 6-1 at halftime.

Montauk did not let up in the second half. Christopher Maichin beamed the ball for the goal. The Epoch player of the game for Montauk was Jack Delipizzi who finished with one goal. He earned the recognition with his play win the face-offs by scooping five ground balls. Delipizzi talked to our announcer mid-game after they asked what his favorite deli was. He chuckled and said his favorite was Summerwind Deli on Montauk Highway. With his play on Sunday, he deserves a sandwich named after him! Comment a sandwich name and that could be his nickname for this season.

Montauk beat Commack 10-3 with a sub-par second half by both team’s standards. The first four goals scored by Montauk made the difference and both teams will look to improve for their next game.

Once again, this Montauk team is also a mix of different players from different high schools. However, this team is comprised of younger players. Smithtown’s Joe Hobot scored the first goal by faking the goal with some convincing pump fakes.

This game saw a number of flags, as Montauk saw at least five man-up opportunities. Alex Siegel nailed the top left corner for Montauk’s first goal shrinking the deficit to just one point. Right before the half, Smithtown’s Epoch player of the game, Marcus Wertheim wrapped around the cage and found the goal for a 3-1 lead going into halftime.

Wertheim was already familiar playing with a shot clock. “Over the summer, I played in a league that had a shot clock,”  he said. “Coach’s game-plan also helped us.”

Wertheim started the second half with an offensive rebound a goal giving Smithtown a three point lead. Montauk struggled with the shot clock and lost possession multiple times this game because of shot clock violations. Aidan Carrello, Montauk’s Epoch player of the game, said that the more his team plays with aa shot clock, the more aware they will be of it.

We saw many teams struggle with the shot clock on Sunday, but these players must learn how to play with one if they hope to play at the next level. This game saw a lot of penalties by Smithtown, but that didn’t hinder their game. Smithtown East won the game 8-2 over Montauk Pink.

If I had to choose the best game of week 1, the game between Syosset vs. North Babylon would take the cake. An intense, low-scoring game that came down to the wire, what more can you ask for! On Syosset’s opening possession, Joseph Beuti found Nicolas Accardo cutting in front of the cage for a goal.

Syosset started the game strong scoring on their first two possessions. Ethan Cotler found the top left corner for an impressive shot getting it passed North Babylon’s goalie Timothy Vine (Albany Commit). Syosset jumped out to a 4-0 in the first half. North Babylon played a flat first half, but had a great opportunity to score at the end of it. With just 10 seconds left, North Babylon’s Mike Hardiman (Swarthmore Commit) drove right down the middle in front of the cage and shot it. But, Syosset’s Epoch player of the game, Joey Greco saved the ball and secured a shutout for the first half keeping the score at 4-0.

Greco said that he, “has to stay focused at the end of the half because the other team wants to score right before the half.”

His save at the end of the half ended up being the defining moment of this intense game.

To open the second half,  North Babylon had to score and Brendan O’Connor stepped into a shot from about 12 yards deep and whipped it in for North Babylon’s first goal. Then, Hardiman found the back of the net for another quick goal. At this point in the game, the momentum began to switch towards North Babylon.

On North Babylon’s next possession, Amir Slaughter sniped one from about 15 yards away for N. Babylon’s third goal in five minutes. Slaughter was named N. Babylon’s Epoch player of the game for his energy that he brought this game. He had all of the viewers cheering for him as the game went on. Slaughter is a senior and has not committed yet, so any college coaches reading this, check him out!

With seven minutes left in the game, Elias Bowie wrapped around the goal to tie the game at 5-5. The ensuing face-off between Luca Accardo (Binghamton) and Ronald Zepeda was the most important of the night. Luca Accardo won the face-off and found his brother Nicolas Accardo for the goal to give Syosset the lead.

Syosset was able to hold on to the 6-5 lead and win the most exciting game of the week. I highly recommend watching the full game in the link below.

Game 4: Calhoun vs. The Saints

The Saints came out hot to start their first game of the season against Calhoun. Their Epoch player of the game, Patrick Carragher (2023) scored the first goal. The Saints scored the first four goals of the game before Alex Vieni (Stony Brook Commit) launched a shot from 14 yards away. In the process of his shot, he broke the head off of one of the Saints defender’s stick. Wow!

The Saints went on another four goal run with Carragher scoring two straight goals give the Saints an 8-1 lead. Calhoun wouldn’t go away though, scoring two goals in the last two minutes of the half and went into halftime down 8-3.

Carragher already had a hatrick in the first half and he went for another hatrick in the second half. He finished the game with six goals! He said he has been working extremely hard in the “Thoman gym” in the offseason. This would be a good time to say that Calhoun’s Epoch player of the game was Peter Thoman, founder of the Thoman gym.

Both these players are friends off the field and during the Covid-19 offseason, the two of them and others went to Thoman’s garage where they had a little gym setup. Their dedication in the offseason showed up on the field for both players and we are excited to watch more of them as the season goes on. The Saints went on to defeat Calhoun 15-4.

Check out my fellow LILJ journalist Ryan Magill’s in-depth recap of our first boy’s Epoch game of the week!