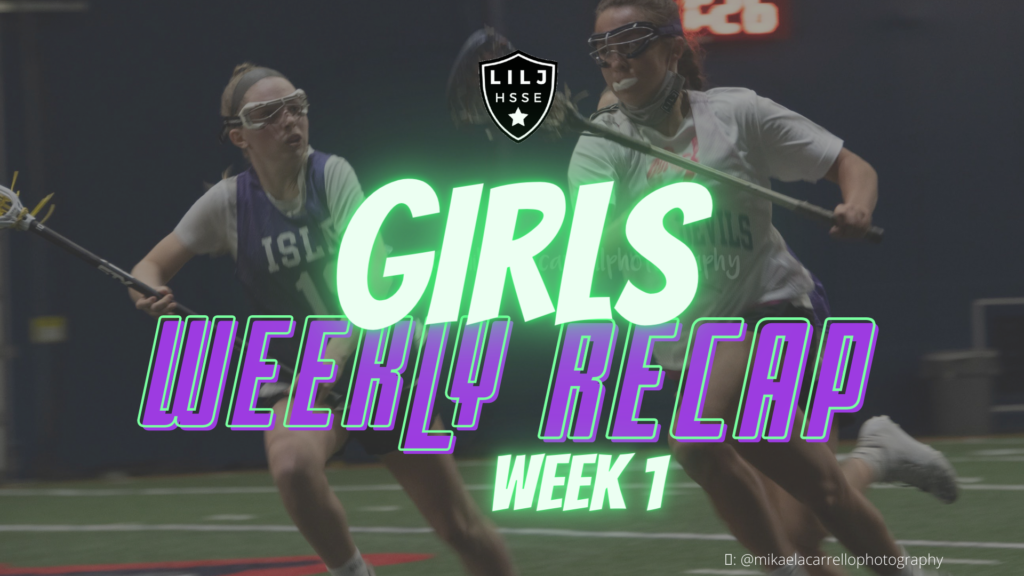 After an incredible day of lacrosse on Sunday, let’s take a quick look back at each game. There were five awesome girls games for our week 1 of the LILJ HS Spring Experience. Let’s kick things off with the cross-county match-up between the Warriors of Wantagh and the Cat of Shoreham.

The game started slow as both teams had to get used to playing on full-field turf again. Wantagh scored the first goal of game when Leena Moussa face-dodged the defender giving her an open shot. Eighth grader, Reese Marcario immediately answered sniping the top left corner for a SWR goal.

The rest of the first half was competitive. Each team couldn’t get more than a one goal lead. Epoch player of the game for Wantagh, Madison Alaimo drove through the defense and hit the top left corner of the cage. She finished the game with four goals and one assist.

After the game she said , “I’ve worked on my stick work during the offseason.”

Wantagh led SWR 6-5 to end the fist half. SWR’s Epoch player of the game, Catherine Erb quickly scored to open the second half. Catherine is a relentless player who says she “challenges every play” and doesn’t give up. Wantagh’s Paige Martin answered giving the Warriors the lead.

Catherine came back to tie the game with 1o minutes left. After, Wantagh’s offense really clicked and scored the last three goals of the game. Alaimo assisted on the first goal and capped off her Epoch performance with a wrap around goal to give Wantagh the 11-8 win.

The second game of the day showcased the runner up of the LILJ Winter Box League Huntington Blue Devils against a young Islip team. Huntington came out quickly with their big three scoring the first three goals. Their leader Jordan Forte (Stony Brook Commit) scored the first goal after winning the first draw of the game.

Huntington scored five goals before Islip had an offensive possession. Islip’s first goal came after Devin Lange had three straight free possessions, what toughness! Lange is only an eighth grader going against one of the better defenses in this league. This Islip team is one of the youngest teams in this league and even though they didn’t score a lot, they played tough.

The first half ended with Huntington leading 7-2. Epoch player of the game for Huntington, Katie Browne (Bucknell Commit) said that it felt great to get back out on a turf field. She finished with three goals and two assists. She said that she hopes for her team to start implementing plays in this season so they are familiar with them for the real spring season.

Islip’s offense couldn’t keep up with Huntington’s defense and had real trouble getting their offense set. But for many Islip players, they hadn’t played organized lacrosse in over a year. For example, the Epoch player of the game for Islip, Madison Neary said her only practice in the offseason passing with her brother in her backyard. Huntington would go on to win the game 16-3.

Westhampton came out of the gates strong scoring within the first minute of the game. Maureen Duffy (Virginia Commit) scored for Westhampton and finished with three goals earning Epoch player of the game for Westhampton. She said she was excited to get back out on the field and play, but the new shot clock “threw a wrench” in her team’s game plan.

After Duffy’s goal, Bayport came back and scored six straight goals. Three of those goals were scored by Alexandra Fusco. Then, Westhampton came back to score three straight goals of their own to start the comeback. But, Westhampton failed to catch up to Bayport who led 8-4 at half.

To start the second half, Bayport’s Epoch player of the game, Hayden Eisfeld stole the ball from the goalie and found the back of the net. This goal sparked another run of goals for Bayport scoring six straight goals again. Eisfeld finished the game with five goals and said she found a “sudden urge” to score at will in the second half. Like many other players, Eisfeld was just excited to play some lacrosse after a year long offseason.

Duffy was the only player for Westhampton to score a goal in the second half and ended up losing 20-5.

Game 4: Epoch game of the week! Long Beach vs. Montauk

Go check out my previous article where I write an in-depth recap of our week 1 Epoch game of the week!

To round off the first week of the girl’s HSSE season, Sachem North took on the Stony Brook School. Alexa Nuzzi (LIU) for Sachem scored the first goal of the game after a slow start from both teams.  The first half of this game focused around the defenses and goalie play. Epoch player of the game for Sachem North, Healey Torres played an impressive first half only allowing three goals.

She said her team was texting about this season all week because of how excited they were to play. Hearing how happy this league has made these players really makes all of us at the LILJ want to create the best league we can for them. Being down two goals, Stony Brook seized an opportunity to tie the game. Lindsey Lucia weaved through Sachem’s defense and scored. Then, Stony Brook’s Epoch player of the game, Alexa Spallina drove across the goal to tie the game.

Spallina said that her brother Joey Spallina, our best ranked player for the class of 2022, inspires her to be better everyday. And she performed today, scoring three goals and assisting on three more as just an 8th grader!

The first half ended in a 3-3 tie. To open the second half, Spallina scored on a free position, and then assisted to Erin James for a quick two goals. With the help of Spallina, Stony Brook took over the second half scoring nine goals and winning the game 12-6.

If this first week is any indication, we are in store for an amazing HSSE league that you won’t want to miss. Keep an eye out for more articles this week including a boys week 1 recap and a preview of the two Epoch games of the week dropping later this week. You won’t want to miss a thing!