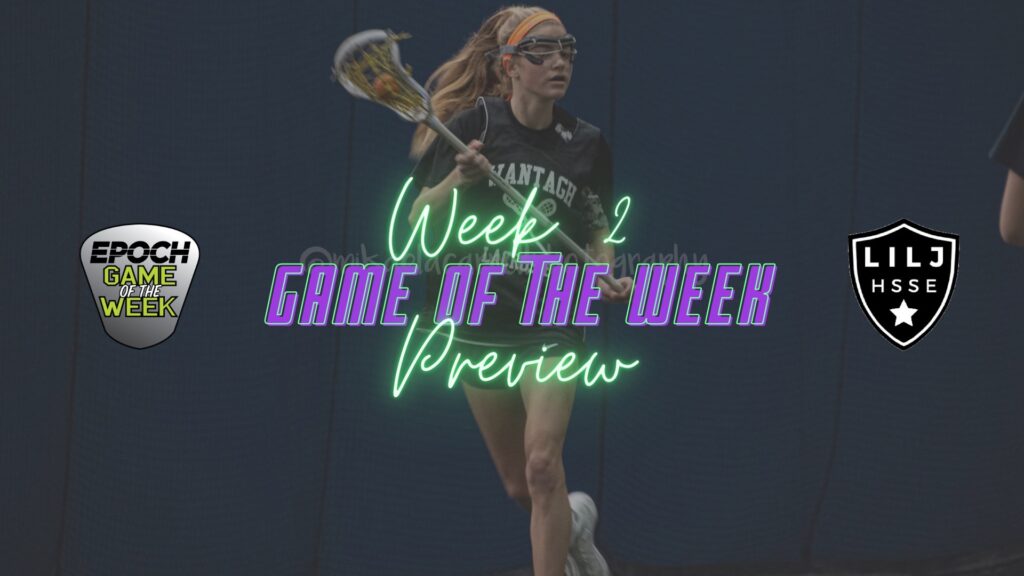 As we patiently wait for week 2 of the LILJ HS Spring Experience, we at the LILJ want to preview the fan voted Epoch Game of the Week. Last week, Montauk defeated Long Beach 17-9. Will Montauk move to 2-0 or will Wantagh stay undefeated?

We will take a look at how both teams played last week and what they can do this week win. Let’s take a look at Montauk’s free agent team first, then Wantagh.

Appearing in their second Epoch Game of the Week, Montauk is a mix of extremely talented girls who need a couple of games to play as a true team. In the case of last week, it took the team about a half to get warmed up. Starting off the game slow, Montauk was  tied 5-5 at half with Long Beach. Then, Epoch player of the Game, Emma LoPinto (Florida Commit) went off scoring four goals and assisting on four.

LoPinto’s partner in crime, Grace Gately (Villanova Commit) also showed up assisting on four goals and scoring one. This duo is nearly impossible to defend. Montauk’s offense can rattle off five plus goals unanswered in the blink of an eye. To open the second half, Montauk scored six straight goals! These types of scoring run demoralize opponents and could effectively end the game. But, Montauk can’t afford a slow start as the season goes on as they continue to play these tough girl’s teams.

We can already tell that this team is a fan-favorite. Their offensive firepower begins with passing and finding the open girl for an easy shot. These girls will pass up a good shot to find the best shot. This is a nightmare to defend, but let’s look at what Wantagh can do to win this game.

Wantagh played in the very first game of the HSSE league against Shoreham Wading River where they won 11-7. Their Epoch Player of the Game, Madison Alaimo was the focal point of their offense. She scored four goals and assisted one. She will need to perform for Wantagh if they want to win this game.

Alaimo said in the postgame interview, “We can’t get rushed on offense.” Wise words coming from a sophomore! Wantagh’s game-plan has to involve taking their time on offense. Even with a shot clock, the offense should move the ball and girls should be cutting to find the openings on defense. Montauk’s game-plan is to score fast and often. Forcing them to wait 40-50 seconds playing defense could put their offense out of rhythm.

On defense, senior Shannon Sullivan has to step up. She is a master at scooping ground balls and sprinting to the offense to initiate the transition. She already has experience playing LoPinto and Gately from the Box League, so her team will look to her to help stop them. Last game, she scooped eight ground balls and scored two goals. Her GB ability and grit will have to rub off on her team in order for Wantagh to compete with this Montauk squad.

Comment below who you think will win! Thank you for reading this week’s preview. Don’t forget to read my preview for the Boy’s Epoch Game of the Week between Montauk Green and Syosset. Then, check back next week for even more High School Spring Experience content!