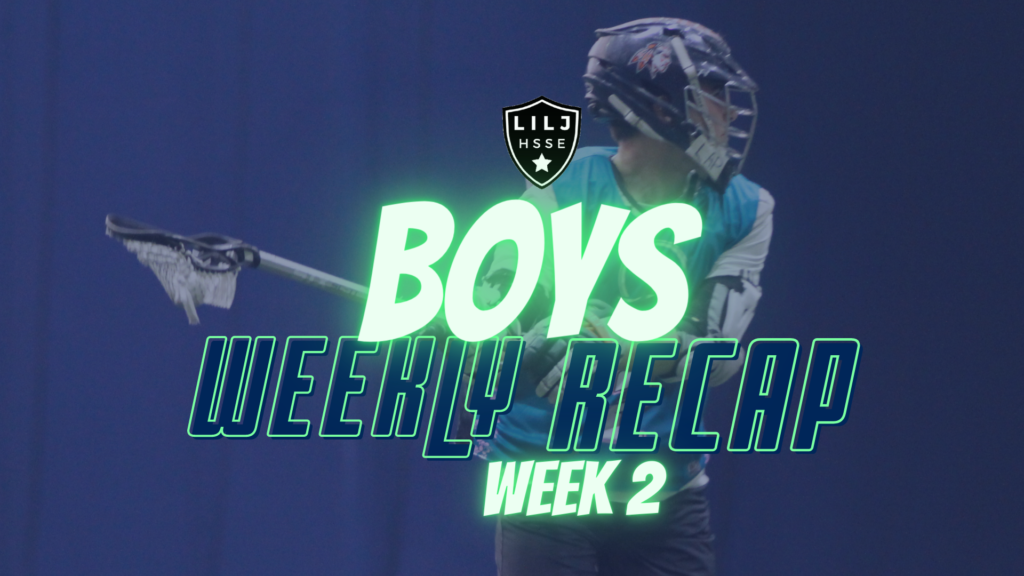 Epoch Game of the Week: Montauk Green vs. Syosset

To kick off the second week of the Boy’s High School Spring Experience, Montauk Green battled Syosset in a nail-biter . Check out Ryan Magill’s in-depth recap of the Epoch Game of the Week, then come back to read how the rest of the week went!

Game 2: Montauk Pink vs. The Saints

In the second game of the day, we saw the young Montauk Pink team face off against the one of the best teams in the league. Gavin Jacobsen scored the first goal of the game ripping it in the cage.

Colin Gols answered tying the game. Then each team traded goals with Drew Haugen scoring for the Saints then Matt Perfetto beaming a shot in the top right corner for a Montauk goal. The first half ended with the Saints leading Montauk 4-3.

To open the second half, Montauk Pink’s goalie SammyMac Arner made some incredible saves to keep his team in the game. Montauk’s Epoch Player of the Game was Will Levonick, who was a big part of the defense to slow down the Saints offense. He said that the defense had to recover better to stop the Saints from scoring ” shots down the alley”.  But, Montauk’s offense didn’t click in the second half.

The Saint’s Epoch player of the game, Jack Speidell scored his two goals in the second half. His first goal was nominated for our GLE Performances Top 5 Plays of the Week after getting his defender tripped up on the back of the cage and then wrapping around for the goal.

“I saw the defenseman trying to recover really fast,” Speidell said. “So I brought him over the cage and rolled back.” It was an amazing shot to keep an eye for later in the week! The Saints shutout Montauk’s offense in the second half and went on the win the game 11-3.

This game started slow with a lot of good defense being played. North Babylon struck first after Spencer Mace found Ian Votta for the goal. Then, we saw some great saves made by North Babylon’s Epoch Player of the Game, Timothy Vine. Vine showed respect for his opponents saying that he has to “expect the unexpected” like behind the back passes or shots. He did admit that he got lucky on a couple of his seven saves on Sunday, but that has to do with his preparation before games.

For Smithtown East, their Epoch Player of the Game came out ready to score. Owen Carroll scored three goals in the first half including one of the best plays we’ve seen in this league with a behind the back shot in the top left corner. Be on the lookout to see if this shot will also be featured in our GLE Performance Top 5 Plays. Those are the only type of shots that can get passed Vine. A man of few words, Carroll said that he was “Just having fun with the guys” out there during the game.

The first half ended with Smithtown East leading 6-2. In the second half, Smithtown East stepped up their game and rattled off three straight goals en route to their 11-3 win over North Babylon.

To open this game, Commack’s Epoch Player of the Game, Jason LeMay came out firing. He scored the first two goals for Commack with two impressive shots. Then, Max Hawkinson for CSH responded by scoring two quick goals. It was make it, take it for Hawkinson in this one. After, LeMay fired in his third goal of the day. After missing the first week, LeMay was happy to be back out there playing with the boys.

The rest of the first half was close including a third goal for Hawkinson to give him and LeMay three before halftime. CSH led 6-5 going into the second half. To open, CSH’s Epoch Player of the Game, CJ Reilly snuck the ball in the top right corner for one of his FIVE goals for the game.

Only a sophomore, CJ said he enjoys playing against varsity players because it “raises the level” of his game. He also realized that he can’t win a game with just him scoring so he also wants to get his teammates involved including his brother. After Luke Breslin scored Commack’s fifth goal making the score 8-5, CSH scored five straight goals to end the game winning 13-6.

In the best game of the week, Ward Melville and Calhoun battled each other in an epic back and forth game. Going into halftime, we were tied 5-5. I guess you can call that foreshadowing.

To start the second half, Jonathan Lewis won the opening face-off and immediately scored for Calhoun. Then he came back and hit a bounce shot that landed in the top right corner putting Calhoun up two. With just one minute left in the game, Ward Melville was down 8-7.

Going down to the wire, Ward Melville’s Epoch Player of the Game, Andrew Bell’s had to make a move. With just 10 seconds left,  Ward Melville had the chance to tie and Andrew got the ball with four seconds and shot it from outside 10 yards to tie the game!

“I didn’t even know what was happening,” Andrew said. “I just shot it and it went in.” Definitely another GLE Performance Top 5 nominee, and after Andrew tied the game there was a buzz in the facility like nothing we’ve seen. People were looking at each other hoping for more lacrosse. Then, the officials lined up the players for the face-off for our first sudden death overtime this season!

After Ward Melville turned the ball over in overtime, Calhoun’s Epoch Player of the Game Braeden Vieni scooped the ground ball and bolted to clear. After finding his brother on the left side of the cage, Alex and Braeden Vieni ran a pick and roll that freed up Braeden right in front of the goal for the game winning shot!

“I was gassed, but I pushed through and handed it to my brother,” Braeden said. “Then, it was a simple pick and roll. We run that everyday in practice.” After a week that started with the Forte sisters scoring the first goal of their game, it was a beautiful to see the Vieni brothers end another amazing week of lacrosse. Calhoun won the game 9-8.

Thank you for reading, and if there are any games that you want to watch, click here. Next week we are going to have a Weekend of Lacrosse. Instead of just Sunday, we will have games on Saturday as well. Is anyone else just as excited for that as I am, comment below!