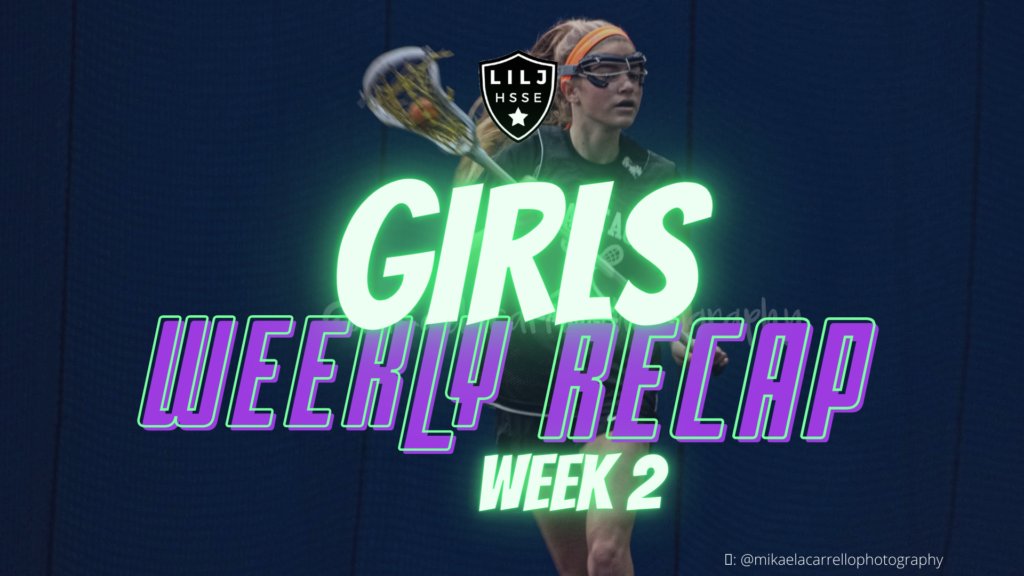 To kick off our second week of the High School Spring Experience,  two teams searching for their first win took the field. SWR scored the first goal after Sachem North turned the ball over in the clear, leading to an open net for Charlotte Erb.

SWR started the game strong leading Sachem North 3-1. The story of this game was the defense by SWR, destined to stop a strong North Sachem offense. SWR’s Epoch player of the game, Mia Rosati, earned the award for her incredible defense. She forced two turnovers and said, “Our team figured out how to work together.” She emphasized how important it was for her team to know when to talk on defense.

In the first half, Sachem North’s Epoch player of the game, Danielle Scarfolgliero (aka Scarf) scored three of her four goals. In order to improve, she said she wants to hit the backyard for some wall ball. Instead of using a wall, Scarf uses a chimney for a narrow target to perfect her accuracy.

SWR went into halftime leading 6-5. To start the second half, Mackenzie Giddens for Sachem North stole the ball from SWR’s goalie and scored. Then, Riley Eaton for Sachem North scored giving them their first lead of the game. But, SWR rattled off seven straight goals to put the game out of reach, winning 13-8.

To open this game, both the Forte sisters came out ready to play. On the opening draw, Jordan Forte won it and ran right down the field to find her sister Gianna for the first goal. After, Westhampton answered with three straight goals topped off by a third straight free position by Lily Graves. Each team battled for the whole game and neither team had control.

Going into half, Huntington led 7-6, but Maureen Duffy came out of half time ready to win. She scored the first goal after a nice stutter step, then assisted to Graves for another Westhampton goal. Huntington saw themselves down 10-7 in a flash, but Epoch player of the game Tess Calabria tried her best to stage the comeback. She stuffed the stat sheet with four goals, two caused turnovers and three ground balls.

With a little over three minutes left in the game, Huntington was down 12-8. Reagan Sansiviero wrapped around and scored. Then, Katie Browne came down and scored for Huntington again and were only down two. At this point, Westhampton felt the pressure and could not score again giving Huntington a chance to comeback. Jordan found Gretel Cassel for another Huntington goal bringing them within one with less than two minutes left. Finally, Westhampton weathered the storm and Reese King found Joely Schaumloffel for a last second goal sealing the 13-11 win for Westhampton.

In one of the more surprising games of the week, two high powered offenses squared off in our third game of the day. But, Bayport played incredible defense on Long Beach all game long. Bayport started the game scoring the first eight goals of the game! To add salt to the wound, Bayport also shutout Long Beach in the first half and that was thanks to Bayport’s Epoch player of the game, Alexis Niblock.

Niblock said she understands her importance on the defensive side. She said she is the only returning defender for this team so she has to be a leader on the field for the new players. She also said their defensive gameplan revolved around sliding early on Delaney Radin. Their scheme for Radin worked because she did not score this game.

Coming out of halftime down 8-0, Long Beach had to find a spark, but Bayport did not make to easy. Even Long Beach’s Epoch player of the game, Cate Miller said, “We were too messy and did not want it.” After a tough game, it is important to understand what went wrong and Miller said the whole team needs to find open players for easier shots on goal. Easier said than done against a Bayport team who is looking really tough to beat right now. Bayport went on to win 17-2.

Epoch Game of the Week: Wantagh vs. Montauk Girls

Check out my fellow journalist Ryan Magill for his in-depth recap of our second Epoch Game of the Week, coming soon!

To end week two for the girl’s HSSE league, we watched a battle of the youngest teams in this league. Looking at the rosters for both of these teams, there are only two seniors for Stony Brook and one for Islip. Islip has more middle schoolers playing than seniors!

Stony Brook struck first with Amanda Sweeney scoring the first goal. As young as both teams are, they were aggressive and even a little too aggressive. There were two yellow cards called and even one was called on Carley Mullins, Epoch player of the game for Islip.

Carley is only a freshman, but on the field she commands respect. As she saw her team losing, she almost demanded the ball from her teammates. She said that her team needed someone to take control of the offense and thought she was the right person for that job. I would agree!

At the end of the first half, Stony Brook led 6-2 with the help of Alexa Spallina and Epoch player of the game Nicole Matthews. She sprinted around the field all day scoring two goals and assisting on two more. For her, she said it felt amazing to be back out on the field playing lacrosse. She credits her speed and stamina to her winter track practices where she runs the 300 meter dash. As a former 300 meter and 400 meter runner, let me tell you that only the fastest people run those races. She helped her team dash to a 13-5 win and all of the sudden this young Stony Brook team is 2-0 and a team to watch out for!

Thank you for reading and following our HSSE league. If there are any games you want to watch, click here for all the streams on the games on Sunday. Keep an eye out for the boys recap as well as our GLE Performance Top 5 plays of the Week on Instagram. And finally, look out for our Epoch game of the week previews that will drop at the end of the week!