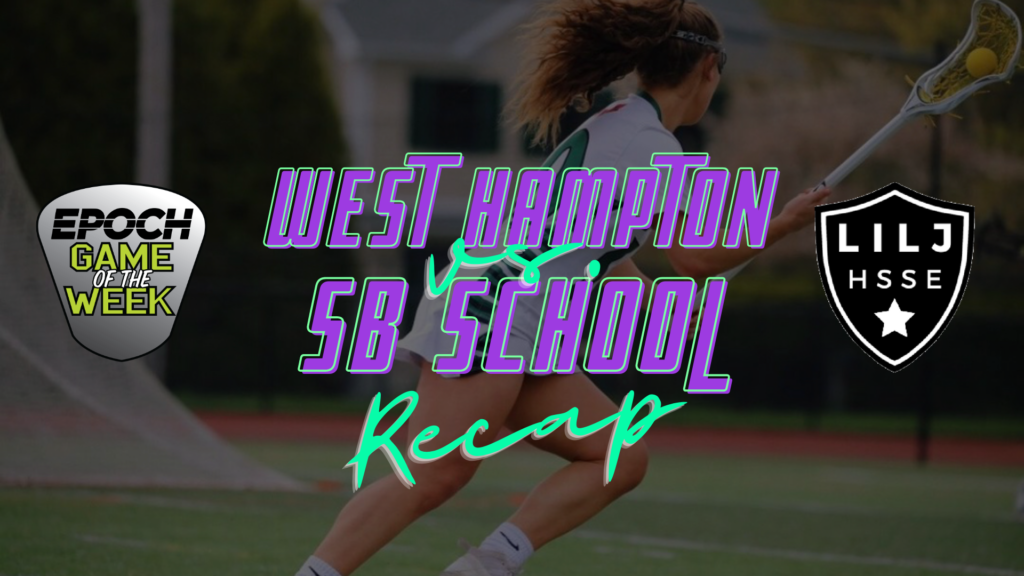 It was a solid team effort for the Westhampton Hurricanes on Sunday, as they defeated the Stony Brook School 14-8 in our Epoch Game of the Week.

Stony Brook got off to the early lead thanks to an Ava Simonton’s goal from off the draw control, before Olivia Rongo of Westhampton tied it up with an alley bounce shot. Soon after, Madison Mosher’s goal gave Westhampton lead.

But Stony Brook answered back as Aubrey Icefeld took it herself to the net for the score to tie it at 2-2. But Westhampton’s Mo Duffy quickly responded yet again to keep the lead in the Hurricanes favor before Stony Brook’s Abby O’Connor grabbed her own missed shot for the rebound and highlight reel goal.

With about 6:30 left in the first half, Westhampton’s Reese King scored a free position goal to take the lead again 4-3. Abby O’Connor then made one of the nicer goals you’ll see all weekend, with a backwards-facing low shovel shot that sniped the bottom left corner. Then, teammate Ashley Bonitch scored her free position goal to retake the Stony Brook School lead at 5-4.

Duffy’s take down in the middle tied the score back up 5-5 with about two minutes remaining before Rongo got the lead back to the Hurricanes 6-5 going into the half.

In the second half, where Westhampton started to run away with the game, Sierra Burns doorstep goal got things started before Stony Brook’s Perfetto’s goal brought the game back to 7-6. When Rongo scored her second on that day though, Westhampton was on a two goal run to go up 9-6, before an Icefeld goal put Stony Brook back within two.

However, Madison Mosher kept the Canes up again with another dodge to the crease for the goal to put her team up to double digit goals on the day before Julia Amato scored to put the team up for good.

After the game, Olivia Rongo of Westhampton and Abby O’Connor of Stony Brook were named the Epoch Players of the Game.

“As a team, we like to work it around a lot and take shots,” Rongo, who finished the day with 4 goals, said in a postgame interview. “We create open spaces for players to cut and for our middies to catch a break when we pass it around. But we are always taught that if we have an open lane to the goal, you take it.”

“Well I play attack, so that’s where I always stay on the field,” O’Connor said of her scoring role in two of her teams goals. “My dad also played attack so we always work on ball-handling drills and tight stick movement. So that way, when I have the ball in my stick I’m ready to go whether that’s an assist or a goal.”

The two teams, after their game, remain neck and neck in the Girls Spring Experience rankings, as they go into the Easter break looking for a chance to rest and recuperate in time for the final weekend.