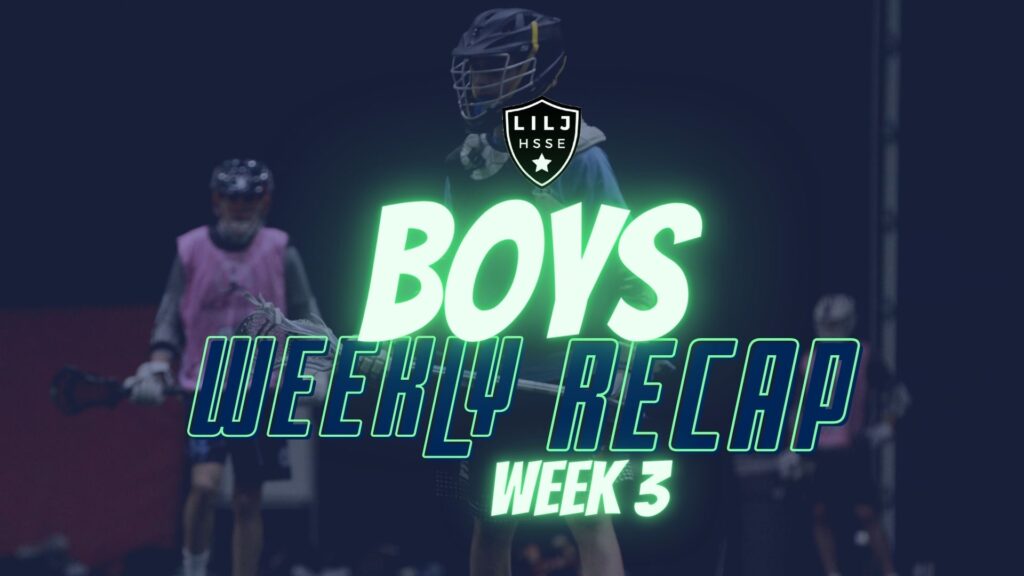 Going into the half way point of the High School Spring Experience, many teams are hitting their stride and making a push for a final four spot. We had some exciting games all weekend long, so enjoy  the weekend recap!

As Montauk Pink searched for their first win of the season, they ran into a tough Syosset team looking for their second win. The game started with Montauk Pink’s Epoch Player of the Game Shaun Hill winning the first face-off and found Matt Perfetto for the goal. Hill had a tough match-up in this game going against Luca Accardo at the face-off X.

“[Accardo] is very strong, I was trying to get it out as fast as possible,” Hill said after the game. “A lot of times when we were tied up he was winning.”

Hill took 15 face-offs and won 10 which is a big reason why this game was close until the very end. He also scored once in the first half which propelled Montauk to a 5-4 lead going into halftime.

Syosset struck first in the second half with their Nicholas Accardo sticking one from 12 yards deep as Syosset was a man up tying the game. Each team went back and forth all the way until it was 7-7 with less than 15 seconds. Epoch Player of the Game AJ Alexander dodged on the left side of the cage spun away from defenders and hit the game winning shot!

“I looked at the clock and there was about 17 seconds left,” Alexander said. “We needed a goal so I did whatever I could to score.”

Alexander produced a GLE Performance Top 5 play to win the game for Syosset so keep an eye out for his game winning shot. What a game!

As Montauk Green came in looking to stay undefeated, they ran into a short handed North Babylon team. To start the game, Epoch Player of the Game for Montauk Christopher Maichin beamed a shot past North Babylon’s goalie Connor Murphy. Maichin finished with four goals in the game.

Montauk took advantage of the short-handed North Babylon team and in a one-sided game, it sometimes can be difficult to stay focused. For Maichin, he said that he doesn’t focus on the score but instead focuses on each play. He said he “resets” every play so he can stay focused on what he has to do for his team.

“It started from face-off X we didn’t have possession the whole game,” Hardiman said. “We were stuck on defense.” The more that a team plays defense the less time they have to execute on offense and Hardiman thinks that winning the possession battle in the future could result in more goals for North Bab. Montauk won the game by a final score of 15-1.

In one of the most exciting games of the weekend, Ward Melville squared off against Commack. The first half started slow and was close. Ward Melville went into halftime leading 6-4.

Starting the second half, Commack came out shooting, finding the back of the cage on their first offensive possession. Then, Commack’s Epoch Player of the Game Tristan McManhon scored his second goal of the day. As we all know, defenders say they make the best shooters, and McMahon showed how good of a shot he is on Saturday.

“I definitely like defense better, but I like to get in on the offense and contribute to the team,” McMahon said. A big goal from a defender can spark momentum in a game and McMahon showed how valuable he is to Commack’s defensive and offensive scheme.

With about a minute and a half left in the game, Ward Melville was up 9-8 as Jay LeMay for Commack brought the ball up the field. He threw a perfect pass to McMahon who shot it, but it was saved by Ward Melville’s Epoch Player of the Game, Davon DiFede. Then, Commack got the offensive rebound and found LeMay who beamed one and DiFede saved it again but with his helmet this time! Two huge saves that sealed the 9-8 win for Ward Melville and his team swarmed him after the game to congratulate him.

“You have to trust your defense in those situations,” DiFede said. ” Honestly, it came down to me wanting to win because our boys played really hard and I wanted to pull out a dub for the boys.”

What a team player and those two saves could be featured on the GLE Performance Top 5 plays so look out for them!

To end Saturday’s slate of games, we watched a high intensity match-up between Calhoun and Smithtown East. Calhoun opened the game with a rocket from Peter Thoman. Looks like he’s been hitting the famous Thoman gym! But, Smithtown East came to play, jumping to a 3-1 lead. Then, Epoch Player of the Game for Smithtown East, Joe Hobot won a face-off and ran directly to cage and scored.

“I just wanted to pinch and pop and get out,” Hobot said. “Then, I saw an opening, to be honest, I just shot the ball and wasn’t even really aiming.”

After his goal, neither team scored for a couple of minutes.

Epoch Player of the Game for Calhoun, Jonathan Lewis scored their next goal after beaming it from the left side of the cage. Not only did Lewis score, but he won face-offs against Hobot, and also played defense with a long stick.

When asked about his versatility, Lewis said, “Especially now, we are short on players and guys have to step up like me and others.” Any team would love a Swiss army knife type of player like Lewis and he showed his importance to this team on Saturday’s game. Smithtown East pulled away in the second half winning 11-6 in the last game on Saturday.

Game 1: Syosset vs. The Saints

After missing the Saints on Saturday, they opened up Sunday’s action against Syosset who just won on Saturday. The Saints jumped to a 7-0 lead in the blink of an eye. With all the firepower on offense for the Saints, the reason for this quick start was thanks to their defense. Epoch Player of the Game for the Saints, Luke Martin had one caused turnover and two impressive ground balls in this game.

Martin’s stats don’t tell the whole story because he motivates his team to play hard and passionately. Martin understands the importance of team defense. Along with him playing “sound defense”, he also has to work with his team. As an underclassman, he is a leader for this team and he said he thinks of himself as a leader and he credits his team for allowing him be that leader on the defense.

The Saints led 7-2 going into halftime. Syosset was missing some players, so this game was going to be tough to win. The Epoch Player of the Game for Syosset was Nicholas Accardo after scoring one goal and scooping four ground balls. Accardo said that his team just needs to have more guys because they were missing a lot. He still is confident that his team can beat the Saints if they run into them again, but Syosset needs to have a full team for that match-up.

For our battle of Montauk, we decided to split up each team a little to create a more exciting game. Green came out string with Nick Biscardi scoring the first goal. Then, Kevin Radman won the ensuing face-off for Green and bolted to the cage for the goal. Gavin Jacobsen came down for Green and scored again putting Green up 3-0.

Chris Bergersen scored the first goal for Pink after wrapping around the cage and found the angle for the shot. Pink had a tough time scoring on the stout Green defense in this game and went into half down 5-1.

Matt Perfetto came out of halftime and stung one for Green. The second half didn’t have as much scoring as the first half, but we saw some great performances from all the players for both teams. Montauk Green ended up winning the game 7-3 pushing them to 4-0 on the season.

Instead of an Epoch Player of the Game, we decided to choose an Epoch Squad of the Game choosing three Green players and two Pink players. For Green we chose Gavin Jacobsen, Matt Perfetto, and their goalie Chris Allen. For Pink, we chose their goalie Owen Connolly and defender Chris Butler. Here is the full post-game interview.

In our next match-up a sizzling hot Ward Melville team ran into a short-handed North Babylon team. Ward Melville sprinted to a 6-0 lead to end the first half. Epoch Player of the Game, AJ Folkman scored once during the first half then he caught fire in the second half finishing with four goals. Some of Folkman’s goals were shot from past 12 yards.

“When I’m shooting in my backyard I practice on that righty step-down shot,” Folkman said. He even admitted to breaking one of his own windows while shooting in his backyard. Oops… “I had to use my own money to fix it,” he said. Let that be a lesson young lacrosse players, just hit the cage.

Even though Ward Melville scored 14 goals, Epoch Player of the Game for North Babylon, Gregory Herbst played some solid defense scooping tough ground balls. Herbst is a consistent player that goes into every game the same way.

“I try to keep my playing style the same,” he said. “I try to get every ball I can and just push it as fast as possible without slowing down.” Herbst finished with three ground balls and one caused turnover.

Ward Melville won their second game of the weekend 14-2 and seem like a tough match-up for any team in this league. They have caught momentum and are extremely confident now so watch out for them!

For our final game of this amazing lacrosse weekend, we saw Smithtown East face-off against Commack in the boy’s Epoch Game of the Week. Check out Ryan Magill’s in-depth recap of this game by clicking right here!