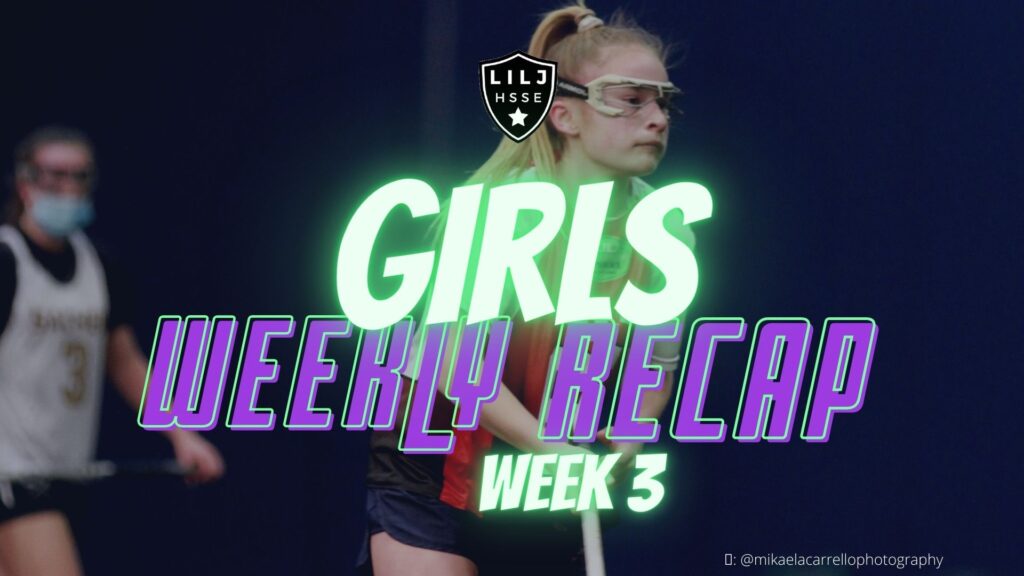 What a weekend of lacrosse! We had games on Saturday and Sunday this week for the High School Spring Experience. So sit back, relax, and read up on the girl’s games we saw this weekend!

To kick off their third game of HSSE, Bayport and Wantagh squared off. Bayport looked to move to 3-0 and stay undefeated while Wantagh tried to beat one of the best team’s in this league. Wantagh struck first when their Epoch Player of the Game, Leena Moussa dodged her way to the cage for the goal.

Wantagh understood the challenge of beating Bayport, especially when they were missing some players to fall sports. Moussa is a senior that understands her role on a young team. After the game said,

“The seniors are trying to be a good influence to [the younger players] and hype them up during the game.”

After Moussa’s goal, Bayport rattled off seven straight goals showing their team’s chemistry and offensive power. Epoch Player of the Game for Bayport, Katie Clare scored two goals and assisted to Alexandra Fusco. She has a great feel for the game and uses her speed to bolt by defenders. She said that she likes to pull herself back away from the defender before dodging so she can “gradually increase” her speed making it impossible for a defender to slide in front of her. Bayport moved to 3-0 after beating Wantagh 14-5.

Go check the recap of our Epoch Game of the Week for Saturday’s match-up between Stony Brook and Westhampton by clicking right here.

Our third game on Saturday was between Montauk and Shoreham Wading River. Montauk, searching for their third straight win started off strong with Anna Thorton scoring a quick goal. Montauk handled its business in the first half scoring seven goals that was capped off with two assists by Montauk’s Offensive Epoch Player of the Game, Emma LoPinto. She finished the game with one goal and three assists.

Along with LoPinto, Montauk also had a Defensive Epoch Player of the game with Jennifer Seebach. Mid-game, you can actually hear Seebach yell “LoPinto is on FIRE!!” after LoPinto made a great play. LoPinto and Seebach don’t normally play together, but they had an instant connection. LoPinto talks about Seebach’s defense and said,

“We played in the fall and she guarded me, and I really couldn’t get by her, honestly.”

Seebach is one of the best defenders we have in this league and I credit that to how loud she is on defense. She said,

“The more we talk, the more stops, interceptions, and ground balls we had.”

For SWR, they picked up their play in the second half with their Epoch Player of the Game Carlie Cutinella quickly scoring. Cutinella has enjoyed the atmosphere of the HSSE league because she said it allows for more “player interaction” due to no fans being in the facility. She said her parents also enjoy watching the live stream with commentary so they have a better understanding of what’s going on in the game. She scored three goals in the second half after her and her team realized that this league is “all for fun, there’s nothing on the line”. However, Montauk’s early lead was too much to overcome and Montauk won 17-4.

To end Saturday’s games, we were treated to an intense game between two formidable teams. Long Beach started the game fast after Delaney Radin found Ava Main for the goal. Then, Reagan Martinsen stole the clear and scored for a quick 2-0 lead for Long Beach. On Huntington’s next possession, Epoch Player of the Game, Jordan Forte found last week’s player of the game Tess Calabria for the goal.

Jordan will play for Stony Brook next year and playing in a Stony Brook facility “really gets [her] excited”. During our post-game interview, Jordan was a very kind person, but when she’s competing you don’t want cross her.

Jordan plays with a sort of toughness that will help the Lady Seawolves for the next four years.

For Long Beach, super sophomore Delaney Radin earned Epoch Player of the Game after scoring three goals and assisting on two. She thought Long Beach started the game strong, but she said that her team needs to improve on the “little things” during a game. Radin has played on varsity since 7th grade and she understands that lacrosse is a team sport so she said, “I like to get the whole team involved.”

After finishing the day on Saturday, Long Beach came back on Sunday and played Shoreham Wading River in the first game of the day. Delaney Radin for Long Beach scored a quick goal to start, but SWR’s Epoch Player of the Game GraceAnn Leonard scored on a free position and dodged her way to another goal putting SWR up one.

Leonard says her team has a lot to work on because the team is so young. She was supposed to play on varsity last season before the cancellation, so she wants to use this league to build chemistry on the field.

“Not everyone is used to playing together yet,” Leonard said after the game.

But, she said she is happy to be out on the field playing with her team. SWR trailed 4-5 after the first half.

The story of the second half was incredible goalie play by Long Beach’s Epoch Player of the Game, Sarah Gusler. She only allowed two goals in the second half. Gusler says that she is very vocal on the field and “try to help [her teammates]” by telling them what they should do. Gusler continued to talk about the chemistry of her team. Playing varsity since a freshman, Gusler saw the importance of growing with the team and as a leader of the team now, she tries to get all of her teammates involved.

With Gusler’s goalie play, Long Beach secured their first win of the season beating SWR 13-6. Long Beach has had a tough first three games, so maybe this win will put them in a groove going into the second half of the season.

Like always, go check out my fellow LILJ journalist, Will Wiegelman’s in-depth game recap between the top two teams in the HSSE league. Watching this game felt like watching two all-star teams play so make sure to read and even watch this game for some of the best girl’s lacrosse on the island.

We had a short day for the girl’s games. So, for our last game of Sunday’s action, we watched the young Stony Brook team looking to win their third game while Wantagh looked to win their second. The beginning of the game started fast and in the blink of an eye, there were five goals scored.

Epoch Player of the Game, Eva Ingrilli scored the first goal for Wantagh followed by Leena Moussa stealing the ball and scoring for Wantagh. Then, Madison Nuzzi scooped an offensive rebound and scored for Stony Brook. Stony Brook scored two more goals to give them a 3-2 lead.

Eva missed the first week of this league due to an injury while playing club. But, she came ready to play on Sunday and showed off her new skill of throwing pump fakes at the goalie before shooting.

“I’ll even go to my backyard and sit right on goal-line extended and just practice those fakes,” Eva said. “I work on low angle shots and it’s been working for me.” She finished the game with three goals and one assist.

Stony Brook struggled in the first half trailing 15-6. Coming out of halftime, Stony Brook’s Epoch Player of the Game Ashley Bonitch scored two straight goals from eight yards deep. Bonitch said that she hasn’t played a lacrosse game in a really long time and is happy to be back out there. She impressed herself out there with some of the shots she hit.

“I’ve never shot like that,” Bonitch said after the game.

After she made her first of three goals, she said she knew she could find the back of the cage a couple more times which she did. Wantagh’s great first half propelled them to a 21-9 win over Stony Brook in a game that saw 30 total goals. Wow!