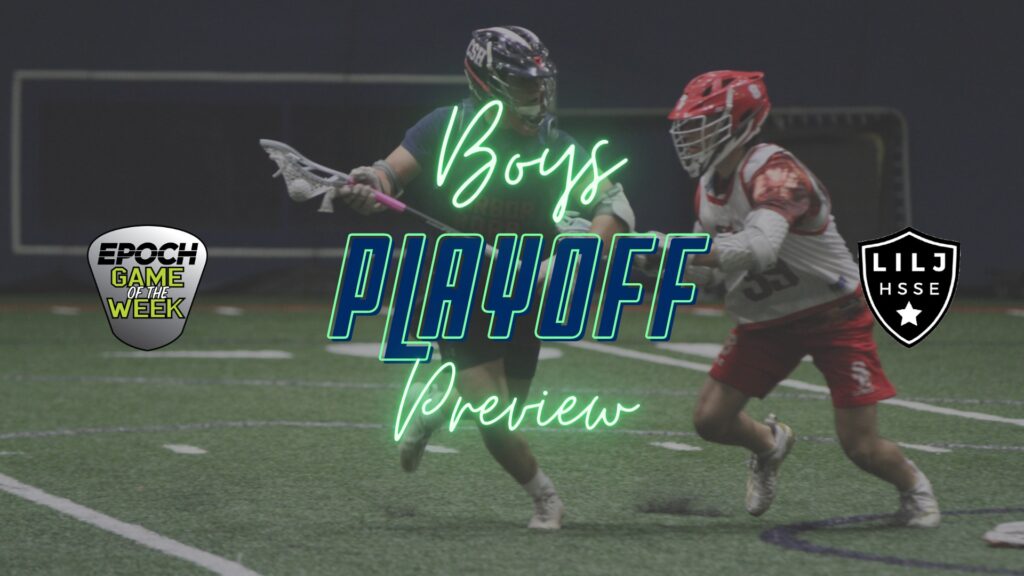 After an incredible regular season of the High School Spring Experience, we finally reached the playoffs. Unfortunately, the Saints had to drop out because of a time conflict with their high school tryouts. So, the whole landscape of the playoffs changed now that the former one seed has left so lets look at these games and predict who will win!

Both of these teams struggled to build chemistry during the regular season. They had players missing some weeks and it’s tough to build that chemistry when only playing together once a week. But, let’s take a look at North Babylon’s team first.

North Babylon struggled through the regular season, but was always competitive. Amir, the One Man Clear, Slaughter brings toughness to this team and he never gives up on a play. Slaughter loves to scoop ground balls and clear it himself where he can find either Ian Votta or Mike Hardiman for the goal. This team has a lot of talent on offense, but they just didn’t play together enough to build chemistry. Maybe they will click this week and beat a tough team in Commack.

Commack has the potential to win the championship with the talent they have. Their leader, Jason LeMay has missed some weeks and that really affected his team. If he is there on Saturday, every other team will need to watch out. Brandon Berozi is another player to watch on Commack’s offense. He dodges defenders and loves to find the back of the cage. Commack’s goalie Richie Yopp is a scary goalie to play against because he is the only one that will check you outside the crease. He also has made a lot of saves this season so watch out if he is in a groove.

I think Commack will win this game if LeMay is present. The offensive power for Commack will be too much for North Babylon and Commack will move on to play the new number one seed Smithtown East in the quarter-finals.

Ward Melville is a team comprised of freshmen and sophomores. Nikolas Barbero leads the team with 12 goals and 11 assists. He is the leader of the offense and can run the offense from up top or at the X. His ability to score and pass makes him difficult to defend. AJ Folkman missed last week and he was missed. He brings energy for the second-string players when he comes in. He has five goals on the season and will need to find two if not three goals against Montauk for them to pull off the upset. Of course, we know Ward Melville has three studs at goalie, and all three of them need to play their best for them to win.

Last weekend, Montauk Green lost to Calhoun on Saturday and lost to the Saints on Sunday. After starting the season undefeated, Montauk Green will come out ready to prove that they are the best team in this league. Gavin Jacobsen has 12 goals on the season and Matthew Perfetto has eight. This collection of talent needs to find some chemistry to go deep into the playoffs. I trust that they will play well, but will it be enough to move forward against the strong teams. Montauk Green also has  2 studs in goal with Owen Connolly & Chris Allen so keep an eye out for some crazy saves by them.

I think Montauk Green will find a way to win this game. Whether it be a blowout or a close game, Montauk Green’s talent and experience will help them move on to the semi-finals.

After missing two weeks, Cold Spring Harbor looked like they were going to play in the play-in game, but last week they won their last two games to secure the number three seed. Montauk Pink struggled throughout this season, but it was expected because they are a younger collection of players. We knew it would take some time for them to gel together and they won their last two games of the season so maybe they found that chemistry.

Hayden Calabretta is the leader of Montauk Pink’s offense. Scoring so much that we had to put his name down twice on the Montauk Pinks team page on the LILJ  website. He has scored 10 goals and assisted on six. Calabretta will need help from Trevor Gayron and Jack Uvena to keep up with CSH scoring ability. One player that has helped Montauk Pink is Shaun Hill. Shaun is a FOGO specialist for this team, Hill has emerged as one of the better FOGO’s in this league. Wow! He will have to win extra possessions for Montauk Pink if they hope to move past CSH.

For CSH, Max Hawkinson will battle against Hill at face-off X which will be the match-up of the game. Not only does Hawkinson win face-offs, but he also scores with the best of the faceoff specialists in the league. He scored 13 goals on the season and will need to score more to win this game. CSH’s goalie Spencer Will showed us last week how good he was winning an Epoch Player of the Game award. Spencer has to make big saves for CSH to win this game and pick up the rebound after he saves them to limit the chances for Montauk Pink.

Looking at these two teams, I think Montauk Pink might actually have the momentum from last week. These young players want to prove they are just as good as some of the varsity players and I believe Montauk Pink will pull off an upset and win.

These are two of the most dangerous teams in this league. Both of them cause problems for their opponents in different ways. Calhoun has the Vieni brothers who can score at will and are extremely clutch as we’ve seen in the overtime games. Syosset is physical and plays the possession game where they trust their FOGO Luca Accardo to win possessions and their goalie Joey Greco to save shots other goalies can’t. In another world, this could be the finals but in this world, it is the quarter-finals.

Calhoun started last weekend with maybe the best game of the season against Montauk Green. Alex Vieni found his brother Braeden Vieni in overtime for the game-winning goal against Montauk Green. The Vieni brothers can score whenever they want to which makes it really hard for a defense to defend. While they are scoring, Peter Thoman leads the defense with his communication and physicality. These three stars have to shine in this game for Calhoun to secure a spot in the semi-finals.

Syosset will look to their stars Luca and Nicolas Accardo, Aj Alexander, and Joey Greco to win this game. Luca will dominate the face-off against Jonathan Lewis for Calhoun who is Calhoun’s FOGO. More offensive possessions for Syosset means more shots for Alexander who can also score and is clutch as we saw with his buzzer-beating shot to beat Montauk Pink. Last week, Syosset defeated Smithtown East by forcing them to play at Syosset’s pace. That is the power of winning face-offs which Luca does quite often.

This game is almost too close to call. Syosset will probably win the time of possession against Calhoun, but the Vieni brothers are so good on offense that they can score in bunches forcing Syosset to do the same. I almost want to ask the comments who will win this game, but I have to make a prediction and I think Calhoun will win this game with a clutch Vieni goal either in the final minutes or in overtime. Comment who you think will win!