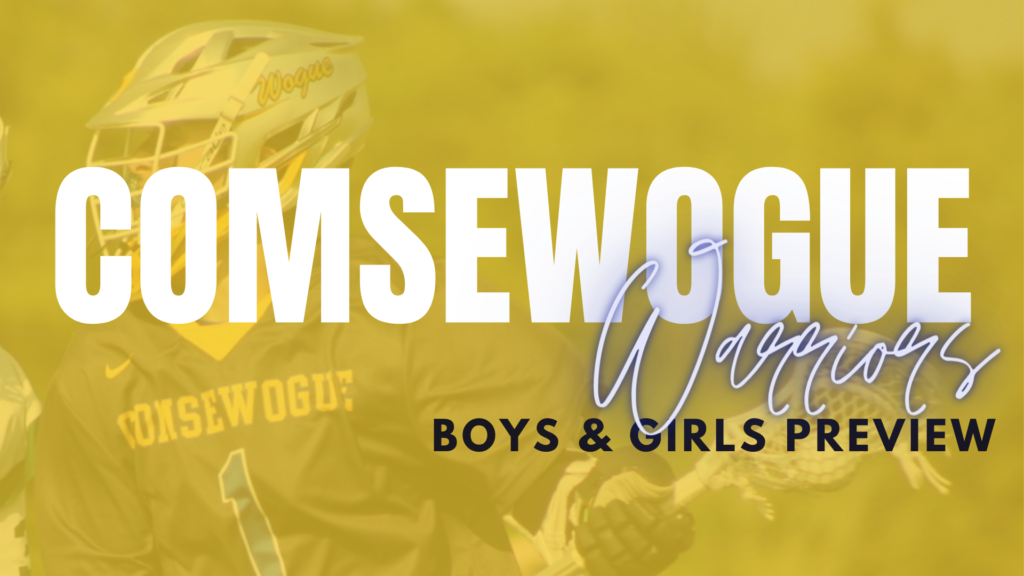 On Monday, Comsewogue High School took to the field for their first practice of the season. The boy’s team goes into the 2021 season as a favorite to raise the Class B trophy at the end of the season. For the girl’s team, many believe that they are one year away from doing the same, but they want to surprise everyone this season.

After a great visit with the Comsewogue coaching staff, our talent evaluators at the LILJ watched a team poised for a deep run at the end of the season. Their no-nonsense head coach Pete Michell is very confident, but understands the target on their back.

“We are excited to get back on the field,” Michell said, “But, we have to whip these guys into lacrosse shape before our first game.”

The lacrosse season opened up on Wednesday for Comsewogue against Rocky Point just a couple weeks after their football season ended.

During practice, the boy’s team focused on capitalizing on odd-man situations. The offense would start with two players defended by one defenseman, then each side would add a player after the shot. Here is a quick clip of the drill in action – Comsewogue man up drill.

Usually this drill is tough for defenders because they are always down a man. But for Comsewogue’s stout defense, they make it tough for any offense to score. With seniors such as James Mantione, Ryan Mimnaugh, Aidan McCaffrey, and Brendan McCray, good luck to any offense trying to score on that big three. This senior class is hungry to win. After missing last season, they felt robbed of a potential Class B championship, so they want to prove to the world they still should be the favorites.

Offensively, this is a dangerous group with one of the best attack units on Long Island. The big three for Wogue is Jake Deacy, Corey Watson, and Michael Katz. Expect this group to give opposing defenses lots of trouble throughout the season.

Most of these seniors have played together since they picked up a lacrosse stick. They see themselves as a team, instead of just talented individuals which is a dangerous for their opponents. They may yell at each other, or Coach Michell might get on his staff to push a little harder, but they are a team and that is how they always leave the field. As a team – Comsewogue leaving the field.

After the boy’s practice, we stayed to watch some of the girl’s tryouts. During tryouts, Coach Mitchell gave our talent evaluators some inside scoops about the team.

“They are really good,” he said. “This team is going to surprise a lot of their opponents.”

During the tryout, their head coach Jacqueline Wilkom started the practice with different passing and catching drills. The first drill was practicing behind the back passes. This was a surprising first drill, but practicing all the ways to make a pass will make that player more confident in making those tough passes  in a game – Behind the back Practice.

Watching that video you can hear Coach Wilkom yell, “I should know who’s passing you the ball.”

Very wise words from a coach because we have all seen miscommunication in sports that could cause a turnover or a goal for the other team. It’s important to practice communicating from day one so that never happens.

Unlike their boy’s team, the girl’s Comsewogue team will play most teams as the “underdog” relieving any pressure of being the top dog in the class. This will allow the team to play without that weight of expectations on their shoulders. Watch out for this team this spring they might surprise some of you!

Right before we left the practice, the girl’s team ran a dodging and cradling drill to improve footwork. They practiced face-dodges and spinning with the right form so they don’t get checked and lose the ball. – Slow motion spin move – This team will continue to practice the technical side of lacrosse and will be ready for their first game of the season at Westhampton on May 4th.

Thank you to Comsewogue for letting us look into their team during their practices. We really appreciate it and want to look at other teams so please let us know what teams you want us to watch practice and write a similar article! Good luck to the Comsewogue Warriors and lady Warriors this season!