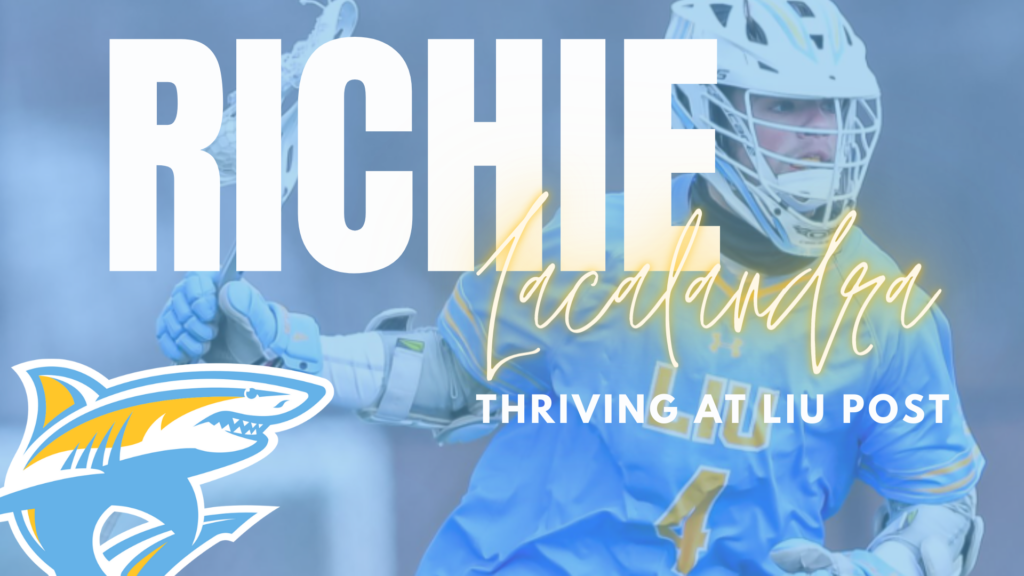 Richie LaCalandra has made a name for himself at the Division I NCAA ranks along with his school, Long Island University (LIU). It’s a recent development that both he and his school are excelling in Division I on Long Island.

After graduating high school, LaCalandra wanted to continue playing lacrosse but needed some way to bridge the gap from where he was then to be college-level. That’s where the post-graduate experience came in.

“Out of high school, schoolwork wasn’t really for me,” LaCalandra said. “I loved lacrosse, when lacrosse season started, I would be pumped to go to lacrosse but it would be a drag to get through school. I didn’t have the grades out of high school so I had to be [post graduate].”

What he got was an experience that prepared him for college both on and off the field.

“I went to Trinity-Pawling and it helped academically because they would have study hall 7-9 every night, you had to be there, the coach would be walking around, doors open, there would be no leeway at all,” LaCalandra said. “Lacrosse-wise, playing in the prep school league compared to high school, even though [Comsewogue is] a good high school on Long Island, but the prep school is such a step above high school and right below college, I think it just prepares you perfectly to make that next jump.”

Not only did the post-graduate experience help prepare LaCalandra for college, it also helped him decide where to go. Originally committed to the University at Albany, LaCalandra’s time away changed his mind. He decided he wanted to be closer to home and re-committed to LIU. LaCalandra is closer to where he grew up and even closer to his brother, and teammate, Karl.

The LaCalandra brothers helped the Sharks to a 6-4 record and the program’s first Northeast Conference Tournament birth. They’re looking to prove the doubters wrong in the playoffs.

LaCalandra has made some big statements with his personal game this year. The sophomore is tied for 10th in the nation with 32 goals and tied for 9th with 29 assists. These accomplishments are great but LaCalandra’s main goal is to take his team to the biggest stage.

“It would be sick [to make the NCAA Tournament],” LaCalandra said. “It wouldn’t even matter what would happen in there but just the fact that LIU made the NCAA [Tournament] in the first year [it] really could would be huge. That’s the biggest goal for me this year.”

The next step on that journey begins on May 5 with the Northeast Conference Tournament. The Sharks are the four-seed and face St. Joseph’s University in the semifinals. The Hawks took the regular-season matchup 14-13 in Philadelphia.

7:34 Playing with his brother

10:35 If LIU could make the NCAA Tournament

11:28 How everyone is different