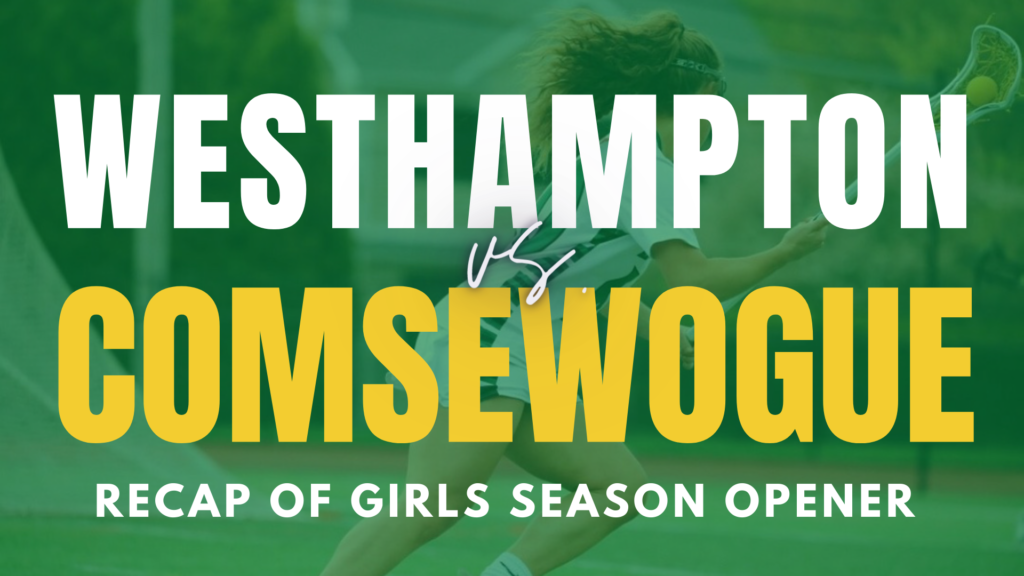 Today, we will look at the season opener for both the girl’s Westhampton and Comsewogue teams. Each team scored in bunches providing an intense game that came down to the wire. Let’s look at how this game went.

To end the first half, Comsewogue scored three straight goals starting with Samantha Amelson wrapping around and scored and ended with Mia Fernandes  finding Gabby Constant for the tough goal giving Comsewogue a 4-3 lead going into halftime.

The story of the second half was the scoring streaks that both teams went on. Comsewogue started the scoring with Nelida Watson throwing a dime to Ava Fernandes who found the back of the cage. Then, her sister Mia Fernandes scored in transition after sprinting from midfield to the cage dodging through the defense. To cap off the three goal burst, Ava stung one from the left side of the cage forcing Westhampton to call a timeout early in the second half.

Out of the timeout, Westhampton still struggled on offense. Comsewogue’s physical defense was led by Gabby Constant who locked down some of Westhampton’s studs like Olivia Rongo. Reese Macario was rewarded a free position giving Westhampton a golden opportunity to score. Her first free position ended with her on the ground awarding here with another free position where she drove in and scored while being stick-checked.

This goal sparked some momentum for Westhampton. Rongo found Tufano for the quick goal giving Tufano her third goal of the game. Wow! With just over 13 minutes left in the game, Duffy scored a clutch goal wrapping around the cage forcing Comsewogue to call a timeout with a 7-6 lead.

Westhampton won the next draw where Amato dodged to the cage for the game-tying goal off a free position. The ending of this game was competitive. Both teams played physical and aggressive defense to prevent the goal. But, Mia Fernandes was given a yellow card after she fouled Amato forcing her to sit for two minutes.

Westhampton knew they had to capitalize on the man-up situation so they gave the ball to the Virginia commit Duffy who dodged her way earning a free position. She beamed the shot past Comsewague’s goalie giving Westhampton their first lead since the first half at 8-7 with five minutes left in the game. Clutch!

Westhampton won the ensuing draw forcing Comsewogue to go for steals or Westhampton would stall their way to a win. Comsewogue came up with a big steal and cleared the ball to their offense where Olivia Rongo was given a yellow card with under two minutes left in the game. This meant that she had to sit out for the rest of the game because it was a two minute penalty.

Now Comsewogue had the opportunity to score on a man-up situation, but Amato came up with a huge steal. After the steal, Westhampton played keep away on offense  until the final buzzer sounded giving Westhampton an 8-7 win. If you are any good at counting (unlike me) you will realize that Westhampton scored FIVE straight goals to win. What a response after going down four goals early in the second half.

Following the win, Westhampton will take on a formidable Mount Sinai team who beat East Islip 14-2 in their last game. We at the LILJ will definitely be at that game so be ready! For Comsewogue, they will battle with Center Moriches who beat Mattituck 10-4. Great game last night and good luck on your next game girls!