Week 1 Epoch Game of the Week: Chaminade Falls to St. Anthony’s in an Epoch Performance by Super Sophomore O. Duffy 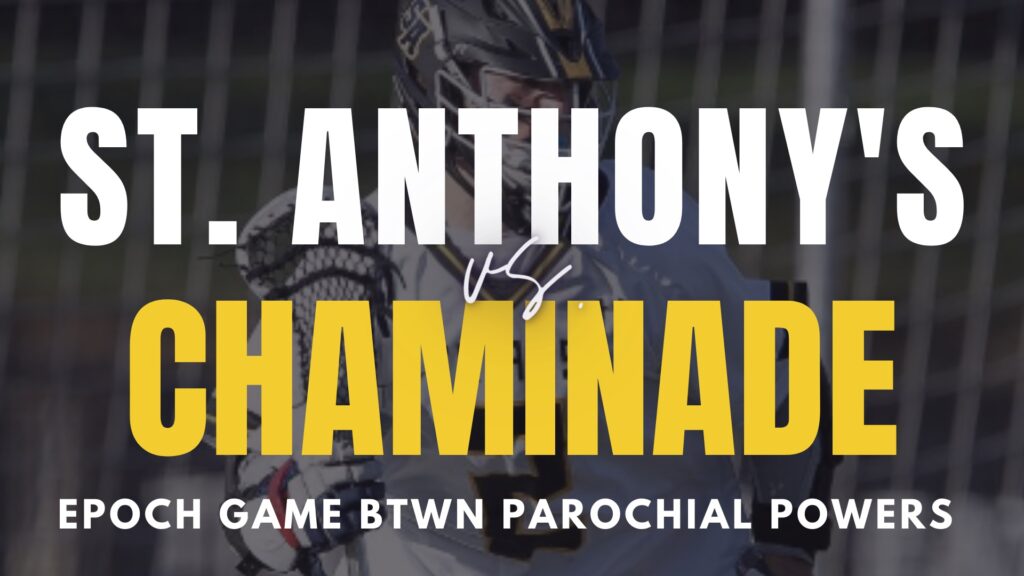 After being postponed, we were treated to an Epoch game between two of the best teams on the Island. This game had it all: Multiple lead changes, beautiful ball movement, physical play, and a performance like none other from sophomore Owen Duffy for St. Anthony’s. Let’s get into this recap!

On the opening face-off, Machado Rodríguez won it forward and and nearly scored five seconds into the game. After his shot hit the right pipe,  St. Anthony’s controlled the ground ball and went to work on offense. Andrew McAdorey spun away from defenders and whipped it in for the first goal of the game. Mike Leo followed up and helped St. Anthony’s jump to a two goal lead early in the first.

Chaminade came back with Jack Flaherty stinging one followed by Thomas Casey to quickly tie the game. The face-off battle between Rodriguez and Jordan Naso was evenly matched. Both players won their fair share of face-offs that helped their teams on offense. Leo ran St. Anthony’s offense early on as he found Ryan Baudo to give them the lead. Late in the first quarter, Charles Balsamo found Conor McCabe to tie the game and end the first quarter. What an opening quarter!

Coming out of the break, Balsamo found Flaherty who dodged his way for his second goal giving Chaminade their first lead of the game. The goal sparked an offensive surge for St. Anthony’s who scored three straight goals. The St. Anthony’s ball movement on offense caused defensive lapses for Chaminade. Owen Duffy scored his first goal of the game after McAdorey found him open in front of the cage. Then, Leo capped off the three goal streak scoring quickly after Duffy.

This run caused Chaminade to call their first timeout of the half. But, St. Anthony’s struck after the break with a beautiful skip pass to Duffy on the left side of the cage for the quick stick goal. William Lynch answered for Chaminade, then Duffy capped off a three-goal quarter by wrapping around to give  St. Anthony’s a 8-5 lead at half.

The break did not slow down St. Anthony’s offense. Duffy wrapped around the cage then spun away from the defender for the opening goal. Then, McAdorey found Duffy for another goal and Cooper Roman threw in a third straight goal for St. Antony’s. Chaminade had to make a push to come back from a six goal deficit and Balsamo sparked some momentum. On back-to-back possessions, he found the back of the cage.

Of course, Duffy responded with his sixth goal of the game reclaiming a five goal lead. McAdorey followed with his second goal to push the lead back to six. To end the third quarter, Christian Alacqua stung two goals for Chaminade to give them some much needed momentum going into the fourth.

Down four goals, Chaminade came out of the break firing on all cylinders. Casey stung one from 12 meters deep. Then, Flaherty beamed one in to bring Chaminade within two! After a couple minutes of tough defense by both teams, Duffy came up huge for his team down the stretch. With just over five minutes left in the game, Duffy wrapped around and scored his SEVENTH goal of the game. That’s right he scored seven goals against one of the strongest teams on the island in Chaminade. After McAdorey found Leo for the dagger, St. Anthony’s began stalling and won this Epoch game 15-11.

After the game, we got to catch-up with Duffy who credited his teammates for how he played in this game.

“A lot of the goals were assisted and we played as a team.” Duffy said. “We made a lot of gritty plays that let to the ball in the back of the net.”

I love listening to such a humble player who puts the team above all else. Even after an Epoch performance, Duffy will show love to his team which we love to see here at the LILJ.

St. Anthony’s will look to stay undefeated as they host Fordham Prep on May 15th. For Chaminade, they will look to bounce back from this tough loss against Archbishop Stepinic on May 15th. These two teams will meet again on May 20th for what will surely be another Epoch game so circle that date on your calendars! Great game boys!