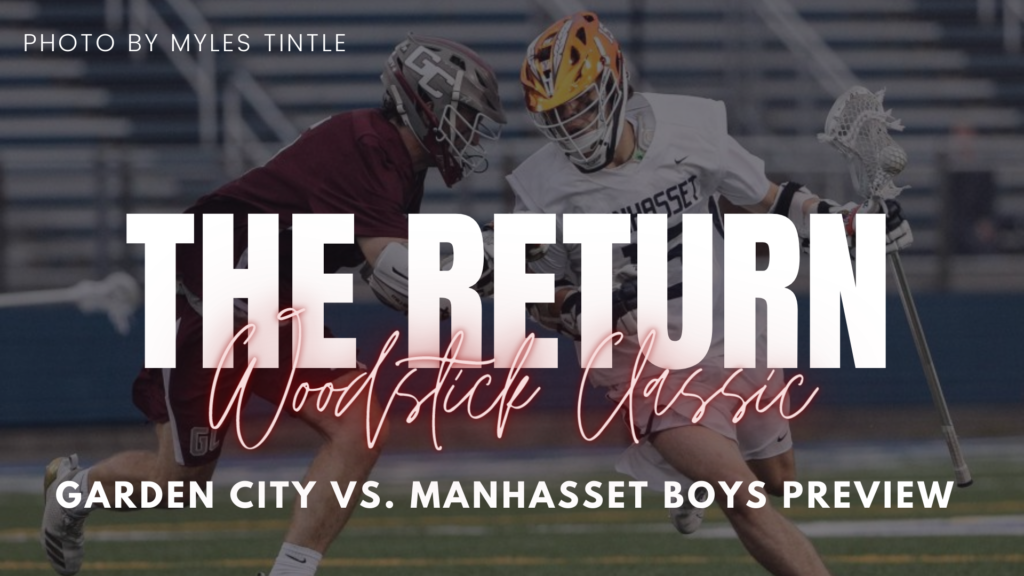 Two of the most storied programs in lacrosse history will battle it out in the 135th Woodstick Classic game. In this article today, we will go through the history behind this meaningful game, notable players who have participated, the atmosphere, and of course the incredible lacrosse we will see on Saturday at 1 pm at Garden City High School. After reading, comment down below some of your favorite moments from the Woodstick Classic.

First, let’s go back to the first clash between Manhasset and Garden City. In 1935, Manhasset beat the newly formed Garden City lacrosse team 12-1 and dominated the first six meetings between these programs. For many Long Islanders, the Woodstick Classic is the “Super Bowl” for lacrosse and can bring in people from around the country to watch this epic rivalry.

One of the best athletes of all time participated in this game numerous of times during his high school career. Hall of Fame running back Jim Brown played for Manhasset High School in the early 1950s. In 1952, he led Manhasset to an 11-4 win in what solidified Brown as one of the best lacrosse players of all time.

Brown famously said, “I’d rather play lacrosse six days a week and football on the seventh.”

Manhasset dominated the early portion of this rivalry which has propelled them to 77-61 all-time record over Garden City. In 1963, Manhasset squeaked by Garden City in a 10-9 win in the old North-South playoffs. Manhasset went on to win the Long Island title for the first time in program history that same year. In another classic, Manhasset and Garden City met in the playoffs in 1976 when Manhasset won their second straight county title winning 8-7.

Garden City made their mark on this rivalry in 1986. After beating down Manhasset 14-4, Garden City finished the season 25-0 and won the state championship. After defeating Fairport 14-6 in the state title game, this group solidified itself as the best team in school history. With stars like Andy Kraus scoring six goals against Manhasset, this Garden City team will be remembered for their dominance that season.

Of course, this rivalry must have some controversy attached to it. In 1994, Manhasset won with a last second goal to go up 13-12. But, this game was nicknamed “The Phantom Goal Game” because the game winning shot never appeared cross the goal-line. So, Garden City protested in the game, but the referee determined that the ball did cross and Manhasset went on to win in a thriller.

Manhasset and Garden City crossed paths in 2006 as both team’s high-powered offense clashed. This game went into overtime at 14-14 and Rob Engelke stung the game winning shot in overtime to seal the win for Garden City. This game saw the most goals scored by both teams in the history of the rivalry.

In their most recent match-up, Manhasset hosted Garden City and defeated them 6-5 to retain the Woodstick trophy after winning in 2018. Unfortunately, the lacrosse season was cancelled in 2020 and that was the first time in 85 years that this famous game was not played. But, on Saturday Garden City will host Manhasset to resurrect this match-up. Now let’s preview how this game will go!

First we will look at the 4-0 Manhasset Indians who have been cruising through the season so far. Manhasset head coach Keith Cromwell has told his team that Garden City will be their “toughest challenge” this season. Cromwell said that he wants his team to approach this game like any other game. But, his players understand how important this game is.

“These boys circle this game on their calendars,” he said. “They already know what it means.”

In this shortened schedule, Cromwell has only had two days to prepare for this match-up and he is using all the time he can to prepare his team for Saturday. As a former Hicksville Comet, Cromwell compared Manhasset and Garden City to college programs and put the teams on a “pedestal” as the gold standard of lacrosse in Long Island.

“I used to be in awe when watching this game,” he said. “This game brings a college environment to the high school field.”

Cromwell mentioned that Garden City is “extremely well coached” and disciplined which will make it tough for Manhasset to score. But, Manhasset’s firepower on offense is difficult for any defense to stop. Players like Rory Connor, Joey Terenzi, and Aidan Mulholland have more than 10 points on the season and will look to add to their totals in this game.

For Garden City, they lost their opening match-up to Port Washington in a big upset. This team has a different play-style compared to Manhasset. They want to control time of possession and force Manhasset to play at their pace. With defenders like Brendan Staub who will be in charge of the defense, Garden City will look to play physical and disrupt Manhasset’s offense.

Ryan Connolly leads Garden City with 10 points on the season. You can see the difference in style of play based on the point leaders for both teams. While Connolly has 10 points, Connor has 17 to show that Manhasset can score at will. This game will be decided by Garden City’s defense and how they can slow down Manhasset’s scoring.

This will be my first Woodstick Classic game and I am beyond excited to watch. It’s also fitting that this will be my first time seeing Manhasset and Garden City play. In a rivalry game like this, it doesn’t matter what the record is of either team because both teams want to win this game almost more than playoff games sometimes. It reminds me of my Pittsburgh Steeler and Baltimore Ravens rivalry where it just doesn’t matter how each team has played in the regular season. These rivalry games are just different and I can’t wait to watch!

I also loved learning about classic games and players who have participated in this rivalry. And I want to hear from you what your favorite moments have been from these battles and what you are excited to see on Saturday!