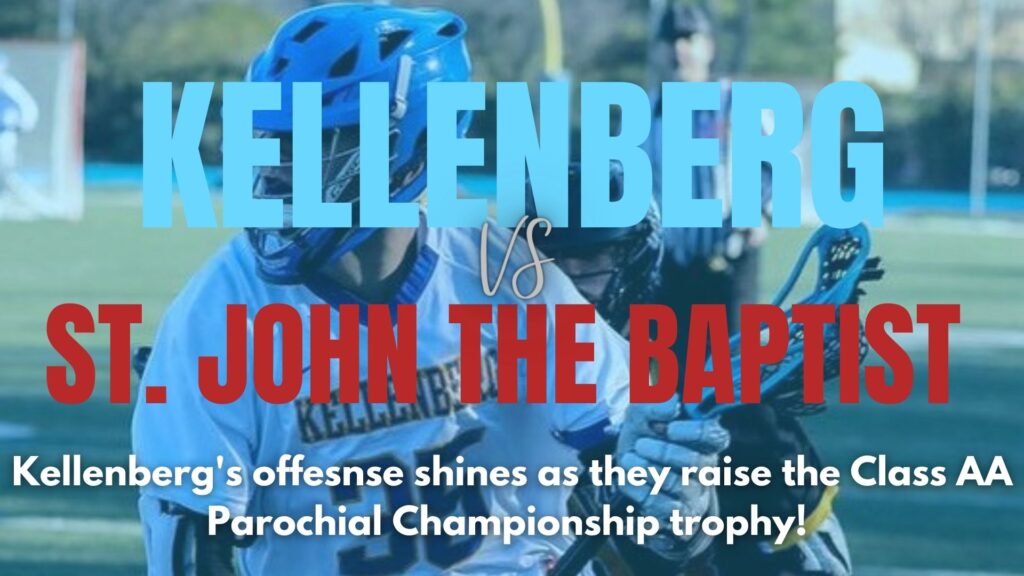 Kellenberg traveled to St. John the Baptist and competed for the Class AA Parochial Championship. These two squads played each other once during the regular season where Kellenberg won 13-7. This time SJB had home field advantage, but Kellenberg came out looking to make a statement. They jumped out to an early lead and never trailed as they cruised to 15-4 victory. Here’s the full recap of how they were able to get it done!

It took a little over two minutes before Kellenberg struck first when Griffin Chernoff gave them a 1-0 lead. Moments later, Brian Russell came around the right side of the cage and scored to double their lead. Aidan Healy for SJB responded for their first goal of the game, but the Firebirds answered with consecutive goals from Chernoff and Sean Rice which extended their lead to 4-1.

Even though SJB struggled on offense, Harrison Hanley had a no look shot that found the back of the cage in what was the best play of the game. From that point on, Kellenberg dashed to a seven goal lead after scoring five straight goals. Adrian Nowak set Brian Russell up who scored his second goal to start the run. After gaining a 7-2 lead in the second quarter, the ball movement really picked up for Kellenberg. The offense made six passes on one play which ended with Nowak scoring his second goal of the game. Nowak followed that up by scooping a ground ball and firing it through the cage for a first half hat-trick and a 9-2 lead.

SJB scored one more goal right before halftime by Vincent DiMaria after forcing a turnover on the defensive end. Despite the goal, Kellenberg was in control going into the break leading 9-3. Chernoff and Nowak poured in six of the nine first half goals for the Firebirds. Each had a hatrick!

Kellenberg continued the offensive downpour when Russell came from behind the cage and extended their lead to 10-3 to start the second half. Chernoff and Nowak proceeded to score consecutive goals which gave each of them four on the game and Kellenberg took a commanding 12-3 lead. More ball movement from Kellenberg led to Michael Gillam scoring two straight goals to get in on the action. By the end of the third quarter, they had a 14-3 lead and were 12 minutes away from winning the championship.

The offense was quiet for both teams in the fourth quarter. SJB got one goal from Christian Maisel, and Kellenberg got one final goal from Rice, and when it was all said and done, the Firebirds came away with 15-4 victory to bring home the Class AA Parochial Championship. Congratulations on an awesome season boys!