Epoch Game of Week 6: Ward Melville travels to Huntington in the battle fo the top spot in Suffolk’s A Conference 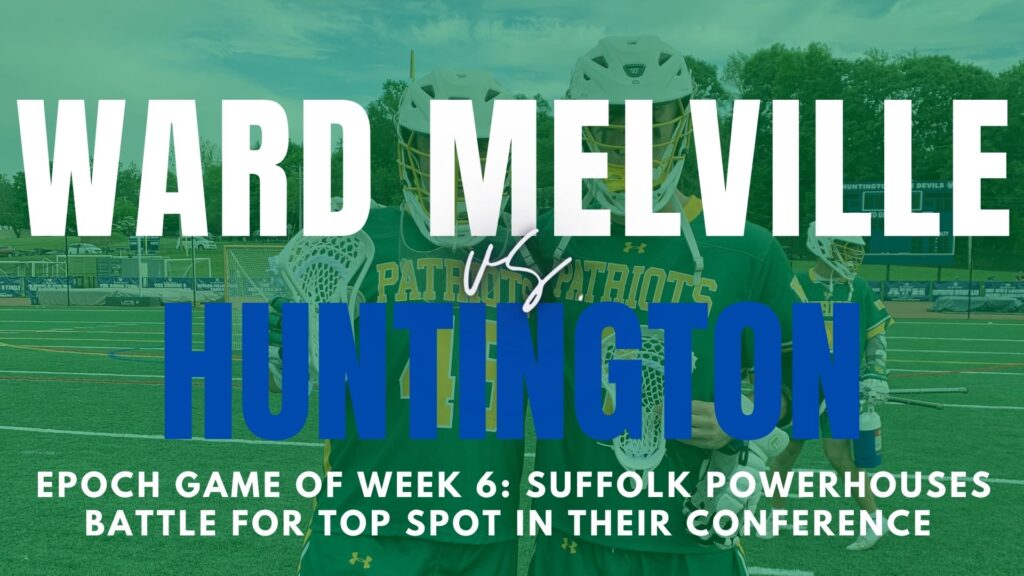 Coming into our sixth Epoch Game of the Week, Ward Melville and Huntington battled it out for the top spot in Suffolk’s A Conference. The Patriots came into the game with a 10-2 record and were looking to hand Huntington their second loss of the season with a record of 11-1. Both these teams hope to finish the season as the #1 seed in the A Conference, and this game could’ve decided who would finish at the top. So, let’s get right into this Epoch Game of the Week recap.

The Blue Devils won the initial draw with their all-star FOGO Anthony Annunziata, but failed to convert. The Patriots struck first with their Epoch Player of the Game James Araneo stinging it from the left side of the cage. John Krisch for the Blue Devils quickly responded with an S-dodge to free up his hands to tie the game. Then, Liam Hassett gave Huntington their first lead of the game early in the opening quarter.

Both teams came out firing on all cylinders in the first quarter. Trevor Dunn snuck his shot past the Blue Devils’ goalie Alex Fascilla to tie the game at two. Out of nowhere, the Patriots caught fire and scored the next four goals to go up 6-2 at the end of just the first quarter. Araneo started the surge when he muscled his way through the defense for his second goal. Chris Simonton joined the action with a low-to-low sidearm shot  and a second goal after Nikolas Barbero dished it  to Simonton from X. To end the quarter, Dunn checked the ball out of Aidan McNulty’s stick then found Tyler Ruffini to go up four goals. What a run by the Patriots!

Both teams played the second quarter slower than the first. Araneo stung his third of the game early in the quarter, but the Patriots would  not score again in the half. For the Blue Devils, they were a bit shell shocked from the outburst by the Patriots, but Hassett sniped the top left corner for  the Blue Devils only goal in the second. Ward Melville led 7-3 going into halftime.

As the second half started, Annunziata won the face-off and nearly scored for the Blue Devils. But once again, the Patriots would strike first in the third quarter with Kevin Dolan beaming it in from 12 meters out. Then, Araneo put in his fourth goal of the game hitting the top right corner of the cage which is a tough shot to make against a stud goalie like Fascilla. Ward Melville had complete control of the game going into the fourth quarter leading 9-4. The Blue Devils needed to dig deep if they wanted to make the comeback.

Huntington’s defense stepped up in the fourth quarter shutting out the Patriots’ offense. The Blue Devils failed to score early on in the quarter, but with about five minutes left in the game, Hassett scored his third of the game with a flag down so Huntington would go man-up on the next possession. This was the time for the Blue Devils comeback,  but they did not score during the man-up opportunity. With two minutes left in the game, Robbert Smith brought the Blue Devils within three goals, but that was as close as they would get. The Patriots’ second Epoch Player of the Game Zach Licavoli came up with a clutch save to seal the 9-6 win for Ward Melville.

After the game, the LILJ caught up with Licavoli and Araneo who talked about getting this win over a tough Huntington squad.

Araneo talked about how his team was motivated to win this game.

“It’s the losses, the big one to Northport which put into perspective that we weren’t working hard enough in practice and not putting in the time,” he said. “Ever since then, and of course the loss to Smithtown West the goal that wasn’t a goal drives us everyday in practice.”

Here is the full interview.