Girls Varsity: Garden City travels to Manhasset and steals a win from the Indians 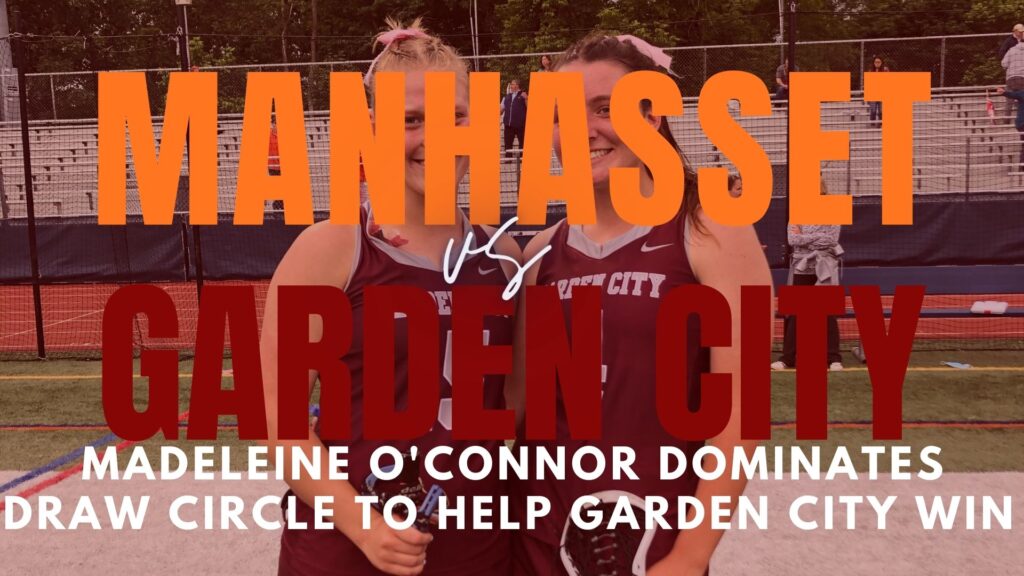 Manhasset and Garden City usually play once a season which is known as the Lady Woodstick Classic, but this season we were treated to a rematch between these two storied programs. The first half was evenly matched as Manhasset led by one at the break, but Garden City caught fire in the second and pulled away with the win. Let’s get into this recap!

Garden City struck first with Meghan Rode patiently wrapping around the cage and scoring. She threw in two spin moves and freed herself up for a nice sidearm shot that found the back of the cage. Garden City’s Epoch Player of the Game Olivia Kaval bounced a free position shot to jump to a 2-0 lead. Manhasset’s offense struggled out of the gate (a very rare occurrence) but Holly Newman dodged all the way to the front of the cage to get the Indians on the board. Grace Gately put in a great performance for Manhasset in this game. She scored off her signature move which is pressuring the opponent’s goalie, causing a turnover, and scoring on an open net to tie the game at two.

In case you missed the first two goals, Rode and Kaval decided to perform a replay. Rode wrapped around the cage again and faded away to retake the lead, then Kaval ran though the defense on a free position for her second of the  gam. Down two once again, the Indians’ offense caught fire and scored four straight to take their first lead of the game. Emma LoPinto wrapped around the cage and shot while falling down to tie the game at four. Gately scored her second of the day off a rebound from LoPinto and she tapped it in to take the lead. Finally, Alexis Morton scored on a free position to go up 6-4 late in the first half.

Alexandra Hopkins was awarded a free position with two minutes left in the first half and she converted to cut the deficit to one. Garden City had multiple chances to tie the game before halftime, but Manhasset’s goalie Finley Collins came up with two big saves to maintain their lead. The Indians led the Trojans 6-5 at the break.

This game completely changed in the second half. The Trojans’ second Epoch Player of the Game Madeleine O’Connor dominated the draw circle after the break. She played a vital role in preventing Manhasset’s offense from getting into a flow in the second half. Angelina Suau quickly tied the game for Garden City by dodging through the defense and scoring. Then, she followed with another goal to take the lead and Kaval scored on another free position goal to go up two. From that point on, Garden City never looked back. Hopkins made a nice pass to a cutting Caitlin Mcnaboe to go up three. Finally, the Trojans’ leading scorer Sydney Pappas joined in on the scoring on a free position.

The nail in the coffin came when Kaval scored her fourth of the game midway through the second half to go up 11-7. The dominance from O’Connor at the draw circle made it nearly impossible for the Indians to make a comeback. But they certainly tried! Gately stole the ball from Garden City’s goalie Amanda Grimes and scored her third of the game. The Trojans answered with Carla Curth dishing it to Suau to take a four goal lead with under ten minutes to go. LoPinto tried to rally the troops when she brought them within three goals. But, that was as close as Manhasset got. Grimes came up with a huge save in the last minute to secure  the 12-9 win for Garden City!

After the game, the LILJ caught up with Kaval and O’Connor who were the Epoch Players of the Game. Kaval ended the game with four goals and she talked  about how the offense was moving the ball really well.

“As a team, offensively we just had a lot of movement creating opportunities for everyone,” she said. “I think it was nice to have a different variety people on the field scoring today. Our highest scorers  weren’t scoring as much and our lowest had lots of goals.”

O’Connor earned the Epoch Player of  the Game award for dominating the draw circle and playing the FOGO position but for girls.

“It’s a lot about preparing properly like watching their film and knowing what each number does,” she said. “I have to give props to people on the circle for always hustling for the balls the go out wide.”

Here is the full interview

Garden City has won eight straight games and look to make it nine when they travel to North Shore to battle it out with the Vikings. For Manhasset, they lost their final game of the regular season and will have all weekend to look over what went wrong and how they can improve. Good game girls!