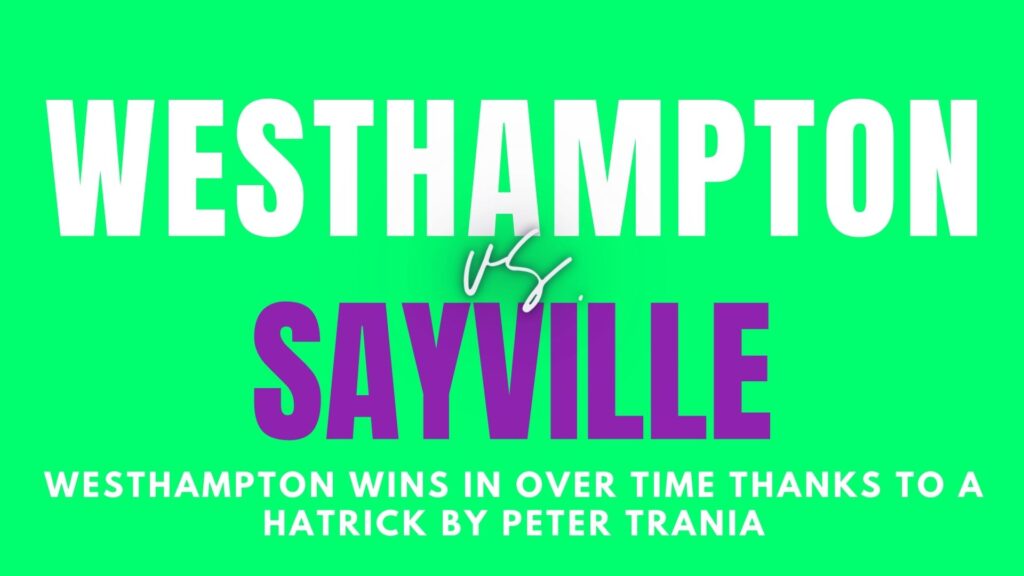 From an early deficit, to fending off a late game surge from the Sayville Golden Flashes, the Westhampton Beach Hurricane Boys managed to win in overtime by a final score of 9-8. A riveting win in June lacrosse, Westhampton was able to emerge victorious in spite of dire circumstances.

After three early saves from Conor Farnan, Sayville’s Ronan Fitzpatrick’s first two goals had the Flashes off and running. After, Dan Nagileri found Gavin Arcuri for the Canes first goal. Fitzpatrick responded with his third goal while Braedan McNamara scored his first to give the Flashes the 4-1 lead at the end of the first quarter.

Bolstered by a big stop by Jake Dagata to end a tough first quarter, the Hurricanes came out ready to play. Peter Trania got it started with his first two goals to cut Sayville’s lead to one. Brendan O’Rourke took it to the cage to give the Flashes some breathing room with a two goal lead at 5-3, but Moore’s first goal of the game had Westhampton back within one to end the half. That was when the Canes stormed back with three more unanswered goals (Arcuri’s second for the tie, Jack Moloney’s first for the lead, and Chris Koltzan’s first goal on a man-up opportunity) as they shut the Flashes out in the third quarter and led 8-6.

In need of a miracle, Fitzpatrick and McNamara answered with the two clutch goals in the fourth quarter, bringing their totals up to four and two respectively. These two clutch goals sent the game to overtime where both defenses shut down the opposing offense. And with less than a minute remaining in the OT period, Traina caught an errant missed save from Sayville’s Dom Russo to bury his third and game-winning goal.

The scoring leaders for both Sayville and Westhampton (Fitzpatrick and Traina) won Player of the Game Honors for their contributions to keeping their teams in this tightly contested matchup. The best lacrosse is played late in the season, and the Canes and Flashes put up a masterpiece.