Epoch Game of Week 7: Shoreham Wading River sneaks away with a win in overtime against Mount Sinai 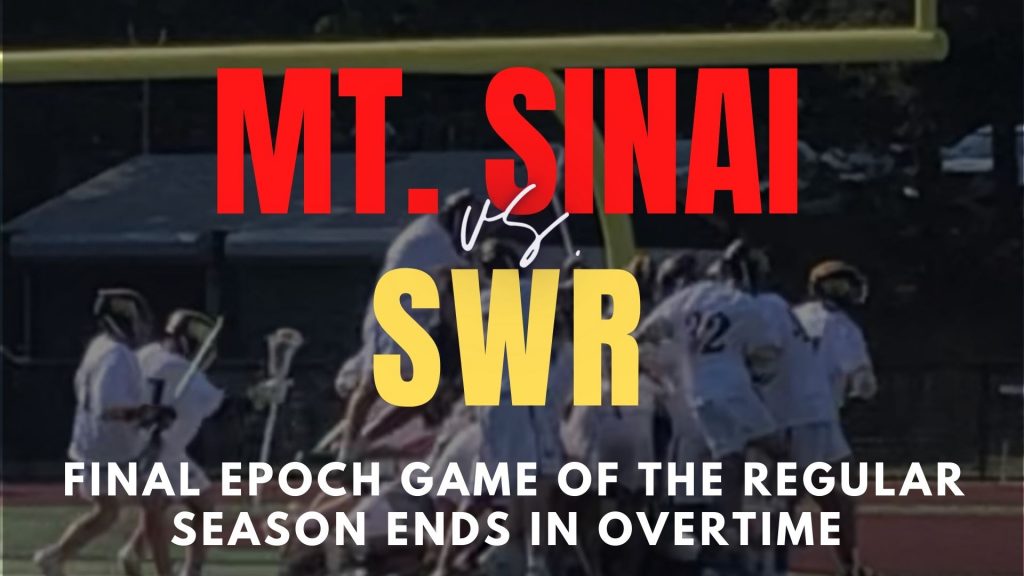 The boys saved the best for last in our final regular season Epoch Game of the Week. Mount Sinai traveled to Shoreham Wading River and produced a classic game between two of the best teams on the island. There was a great atmosphere from the home SWR crowd. On a scorching hot day, they went with a fitting beach theme to cheer on their team. Let’s get into this Epoch game!

With all the scoring to come in this game, the beginning of the first quarter saw multiple great saves from both team’s goalies. Matthew Graffeo for the Mustangs and Robert Troyano for the Wildcats denied multiple shots. But, the firepower of these offenses came through and one of the Epoch Players of the Game for SWR, Liam Kershis, started things off with a tough turnaround shot. The Mustangs quickly responded with Jake Spallina finding Nick Colantonio for the snipe off the top left corner of the cage.

Neither team could build a lead in the first quarter. After Jefferey Lachenmeyer dished it to SWR’s second Epoch Player of the Game, Alec Gregorek for the quick stick, James Carretta answered with a diving shot to even the score at two. Both teams found the back of the cage one more time and ended an exciting first quarter tied at three.

Joey Spallina started off the second quarter with a wrap around shot that surprisingly got passed Troyano for how well he was playing. To answer, Lachenmeyer came back for SWR and absolutely stung a shot from eight meters out that could’ve put a hole in the net! The rest of the second quarter saw more incredible saves by the goalies. Troyano made an insane split save against Lucas LaForge that kept the game tied. The Mustangs’ offense prevailed at the end of the second quarter and Mount Sinai went into the break leading 5-4. The teams and spectators knew that we were in for a classic second half!

The Mustangs quickly scored the first goal of the second half when Joey Spallina threw a dime to LaForge who scored using some pump fakes to get Troyano on his heels. Another quick goal by Mount Sinai gave them their largest lead of the game at three. Then, SWR’s final Epoch Player of the Game Fransisco Cortes beamed a shot past Graffeo to cut the deficit to two goals. Joey Spallina responded with a beautiful move against Jake Wilson where he faked going to his right then spun to his left to go back up three. After a goal from Gregorek, Spallina came back and scored his fourth of the game to head into the fourth up 9-6.

SWR knew they had to make a push in the fourth if they wanted to win. They started the quarter scoring the first two goals with Gregorek scoring his third of the game to bring them within one. The Mustangs responded with a goal of their own, but with six minutes left in the game, Cortes stung his third of the half to bring the Wildcats within one. After a stressful three minutes for SWR, Lachenmeyer passed to Kershis who tied the game at ten with less than two minutes left!

Even after tying the game, SWR still had to come up with a huge stop if they wanted to go into overtime. The Mustangs called a timeout with a minute left and gave the ball to Spallina and told him to work his magic. Spallina held the ball for 45 seconds in X before initiating the offense. He ran to the back of the crease and passed it to a cutting LaForge and Troyano made the save of the season stopping his shot to force overtime! If Troyano didn’t make that save, the Mustangs would’ve won, but instead the game went into an extra period.

In a game with these incredible offenses, the opening face-off of overtime can determine the outcome of the game. Sean Miller of SWR won the face-off and the Wildcats quickly called a timeout. Miller’s winning face-off gave SWR the one chance they needed to win. After a shot bounced off the pipe, Gregorek ended up with the ball, and I’ll let him say what happened next.

“I saw I had the shorty and I ran through my head exactly what I was doing as I got the ball and take him down the left alley,” he said. “If he gave me enough room I was going to split back and shoot it righty, but he gave me my left and I just took it.”

Gregorek’s fourth goal of the game secured the win for SWR in what was one of the best games the LILJ has attended all season. After the game, Kershis spoke about the resilience of his team being down three in the fourth quarter.

“We got a couple of unfortunate situations before half and going into the fourth quarter.” he said. “We just didn’t let it get to us, we just kept our heads up and kept going on running and doing what we do.”

Here is the full post-game interview.

This was the final game of the regular season for both SWR and Mount Sinai. SWR will carry the momentum from this game into the playoffs and are poised for a deep run. Mount Sinai will use this game as motivation to push them into a deep playoff run and we just might see another Epoch rematch between these teams. Great game to both of the teams it was exciting to watch!