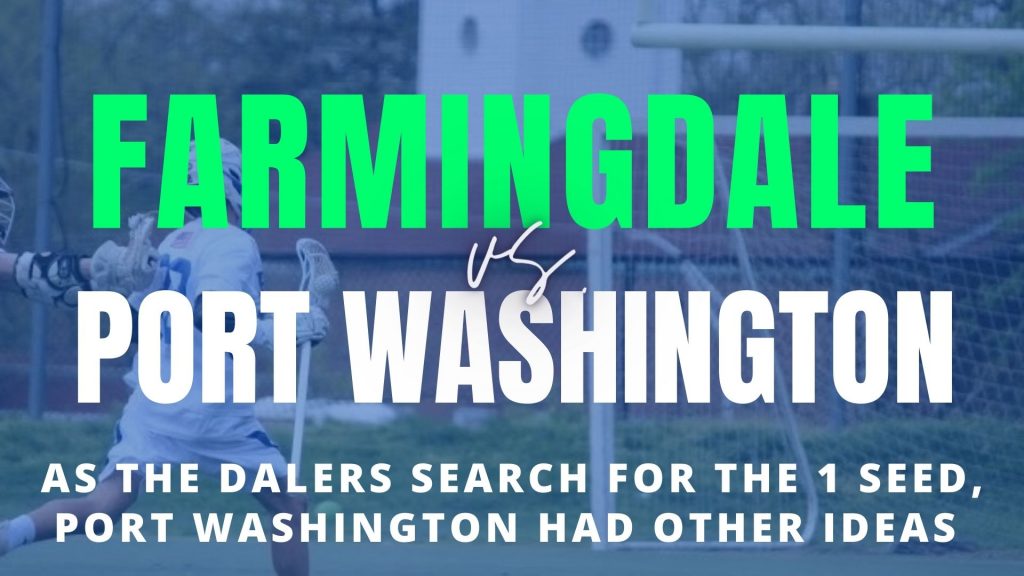 Two of the top teams in Nassau battled it out on Friday night in Farmingdale. Both of these teams were searching for the #1 seed in Conference A, and if Farmingdale won, they would be poised to take the top spot. Port Washington came in with an 8-2 record, and Farmingdale entered the game 9-1. Offense was hard to come by in the first half as Port Washington’s Patrick Kenny and Farmingdale’s Danny Seaman did a tremendous job protecting the net. However, Port Washington’s offense got it going in the second half and came away with a 9-5 victory. The quartet of Henry Haberman, Luke Meyer, Jared Morales, and Jensen Weingard led them to the win. Here’s the recap of how this one went down!

Port Washington won the opening face-off, but after not scoring, Farmingdale gained possession with an opportunity to grab an early lead. A shot by Steven DiCarlo was saved by Kenny which led to Port Washington going the other way and Haberman gave the Vikings a 1-0 lead. Shortly after, DiCarlo got another opportunity for the Dalers and came around the right side of the cage and scored to even the game. Shortly after, Tomaso Ramos absolutely stung a shot off an assist from DiCarlo which gave the Dalers a 2-1 lead.

The remainder of the first quarter, and most of the second, was a defensive battle. Neither team could get their shots past Seaman and Kenny who were anchoring their respective nets. But, Port Washington came up with the equalizer late in the second thanks to a laser by Morales. Farmingdale had a chance to go into halftime with the lead, but a clutch save by Kenny kept the score even, and the first half came to close with a 2-2 score.

Farmingdale won the third quarter face-off but were unable score coming out of halftime. After Port Washington gained possession, Weingard got the Vikings on the board three minutes into the quarter when he came from behind the cage and put one through giving them a 3-2 lead. One minute later, Meyer gave the Vikings a 4-2 lead with a similar move. The Dalers had answer to cut the deficit back to one. DiCarlo got a step on his defender and blew past him to score his second and made it a 4-3 game.

The one goal deficit was short-lived as Port Washington went back up by two in a blink courtesy of another goal from Morales. The Vikings responded when Meyers scored less than a minute later. Trailing 6-3 Farmingdale was in need of an answer which they got thanks to Thomas Decker ripping one through from the center of the cage.

The fourth quarter saw Port Washington pick up where they left off. Haberman got things started by scoring his second goal of the game off a great spin move to elude his defender and have a clear shot. Weingard then scored his second goal after faking a pass to his right and taking off for the cage. The four goal lead was Port Washington’s largest of the game. DiCarlo cut the deficit to three which gave him a hat-trick on the day, but Meyer put the exclamation point on the game with a hat-trick of his own as he scored amidst some harsh contact to put the Vikings up 9-5. They went on to win by that score.

If Port Washington falls to Syosset on June 7th and Farmingdale defeats East Meadow, then there would be a three-way tie for first place between Syosset, Port Washington, and Farmingdale. If this scenario occurs, then the Conference A coaches would vote on who the number one seed should be. Comment below who you think should be at the top if that scenario happens!